Introduction to the following types of parasites:

Metazoan (multicellular) parasites belong to several invertebrate phyla, and they parasitize many different groups of animals. Most well-known parasites occur in fish and shellfish species. Some parasites can cause harm or transmit diseases to humans, but most only harm the host organism. Because fish and shell-fish are transported live for aquaculture, parasites are often transferred with their hosts to new regions. Sometimes the parasites can infect new hosts in the introduced area, sometimes the transferred hosts escape to the wild, bringing their parasites with them. Some parasites attach to external surfaces of the host; such parasites are called "ectoparasites". Most parasites attach inside the host animal (or plant) and are not usually visible from the outside of the host; these species are called "endoparasites". Often the parasites are very small (<10 mm) so a microscope is needed for identification.

Parasites and the diseases they cause can be treated with various kinds of medication or pesticides, but it would be more convenient – and no doubt cheaper – to prevent parasites to enter wild populations of host species. One method to prevent transfer of parasites is quarantine regulations which state that all live transported organisms should be kept isolated for a period of time long enough to identify the presence of parasites or diseases.

In Nordic waters the number of introduced metazoan parasites is rather low, but some of them have large economic impacts. Also a few species are found close to Nordic waters and their host species occur in our waters, so there is some likelihood that they will appear at some time in the future. Because parasites belong to different phyla, short introductions to the phyla have been included in this section. Most phyla contain parasitic as well as non-parasitic species, and for those that also have non-parasitic introduced species, there will be a reference to the introductions to these groups.

The flatworms comprise four major groups: (1) The free-living Turbellaria, (2) the parasitic tapeworms (Cestoda), (3) the parasitic flukes (Trematoda), and (4) the Monogenea, which are usually ectoparasites. In this section a brief introduction to the Trematoda and Monogenea will be given.

Trematodes (flukes) have complex life cycles involving two or more hosts and asexual as well as sexual reproduction at different stages of the life cycle. Generally there is a ciliated, free-swimming miracidium larva. After penetrating the first intermediate host this larva forms a sporocyst. Inside the sporocyst several individuals of another larval stage, the redia. This again gives rise to several cercaria, yet another larval stage, which leaves the host to search for the second intermediate host and forms a cyst, called a metacercaria, which waits for the intermediate host to be eaten by the final host. When the metacercaria enters the final host it migrates to a particular organ, e.g., liver or lungs, and develops the adult form. 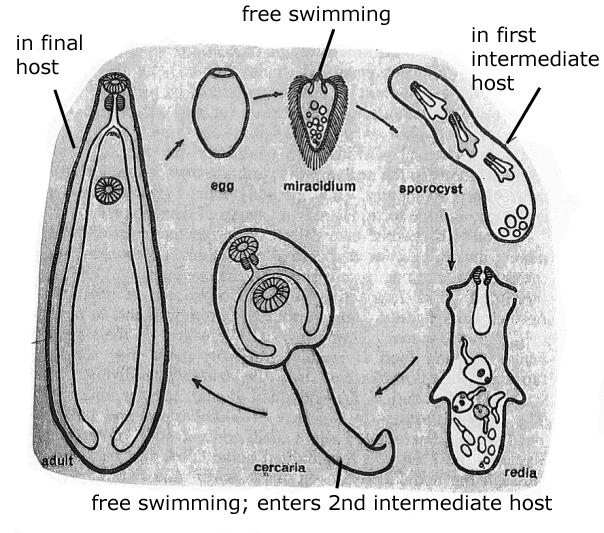 Diagram of life cycle of trematode (From Buschbaum 1951)

There has been some concern that the Asiatic lung-fluke, Paragonimus westermani, which causes a serious lung-disease, paragonimiasis, in humans, might be transferred to Europe and North America with one of its intermediate hosts, the Chinese mitten crab (Eriocheir sinensis), but so far this has not happened.

Only one trematode species has been introduced in Nordic waters, Pseudobacciger harengulae (Yamaguti, 1938), which parasitizes herring (Clupea harengus). Its origin is unknown. See separate fact-sheet.

Monogeneans are small, wormlike animals with adhesive organs at front and rear ends. These organs are often complexly built and important for identification. Some have to switch host at a certain stage of their life-cycle. Several monogeneans have been introduced to Nordic waters, usually with host fish for aquaculture.

Norwegian salmons are often parasitized by the monogenean Gyrodactylus salaris Malmberg, 1956. The native area of this species is the Baltic Sea, and hence it cannot be considered alien in Nordic waters, although it has probably been introduced through human activities to salmon farms in Norway. For further information see: NOBANIS fact sheet on Gyrodactylus_salaris.pdf and http://www.vetinst.no/Faktabank/Gyrodactylus-salaris/(language)/nor-NO [in Norwegian])

The Nematoda is one of the largest invertebrate phyla. It includes marine, freshwater, terrestrial and parasitic species. Nematodes also occur in high abundance in most habitats. More than 4 million individuals have been found in one square meter in coastal waters of the Netherlands. Nematodes have simple body structures, being almost perfectly cylindrical with slightly tapering anterior and posterior ends. They have a complex 3-layered cuticle, which is moulted four times during growth of the animal. Parasitic nematodes display many different life histories. Some are only parasitic as juveniles, others only as adults. Some are parasites of plants, some of animals. Some have to shift from one host to another at different stages. Some parasitic nematodes cause severe diseases in humans, e.g. elephantiasis. Most nematodes have separate sexes, and often the males are distinctly smaller than the females.

In Nordic waters only one species of parasitic nematode has been introduced by human activities, namely the eel swim-bladder worm, Anguillicoloides crassaus.

Acanthocephala is a small phylum of about 1000 species, which are all parasites requiring two hosts. The highly specialized organisms do not have a digestive system; food is absorbed directly through the body wall. They have a long proboscis equipped with numerous recurved spines, which are used for attachment inside the host. The larva bores through the body wall of the first host and lodges in the hemocoel. When the first host is eaten by the final host, a fish, bird or mammal, the acanthocephalan attaches to the wall of the intestine.

There are no introduced acanthocephlans in Nordic waters at the present time. However, the invasive amphipod Gammarus tigrinus, which occurs in the Baltic just south of Denmark and Sweden and has been found in Finland (see fact-sheet for G. tigrinus), is first host for the introduced acanthocephalan Paratenuisentis ambiguus (Van Cleave, 1921), which has the eel, Anguilla anguilla, as its final host. This acanthocephalan is presently found in Germany and Poland, where G. tigrinus has been established for some time. It is most likely that P. ambiguus has been introduced with eels for aquaculture because apparently the G. tigrinus originates from laboratory reared specimens.

For a general introduction to copepods see: INTRODUCTION TO COPEPODA. Parasitic copepods can be ecto- or endoparasites, and their bodies may be highly modified, usually with short antennae and appendages modified for attachment. In many species there are "dwarf males", i.e. the males are much smaller than the females, and they look more like regular copepods. In some species only the characteristic egg sacs, which may be extruded from the host body, reveal the identity of the female copepod parasite. Some examples of parasitic copepods can be seen on the Sea Slug Forum. 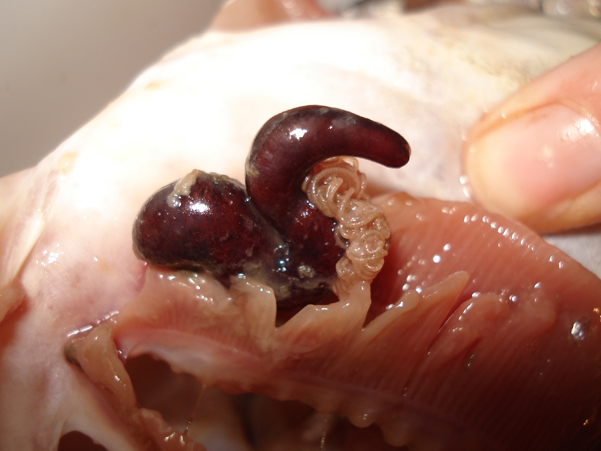 One species of parasitic copepod has been introduced into Nordic waters, Mytilicola intestinalis, which parasitizes blue mussels.

Some other species have been found in shell-fish close to Nordic waters, e.g. Myicola ostreae Hoshina & Sugiura, 1953 from Japan, which parasitizes Pacific oysters in the Netherlands, France and Ireland (Wolff, 2005; Minchin, 2007).

For a general introduction to Cirripedia see: Introduction to barnacles. Rhizocephalans are a super-order of the Cirripedia (barnacles), which are all parasitic in other crustaceans. The adults are completely modified for parasitic living. Their bodies form a system of branches throughout the body of the host, usually a crab, and only the sac-like organ containing eggs, the "externa", is extruded. Rhizocephalans castrate their host, and male parasitized crabs do not form the characteristic narrow abdomen. Instead their abdomen is almost as broad as that of the female. The most familiar species is probably Sacculina carcini Thompson, 1836, which parasitizes the common shore crab Carcinus maenas and other crabs (see http://species-identification.org/species.php?species_group=crustacea&id=215&menuentry=soorten). Rhizocephalans have characteristic barnacle-type nauplius and cypris larvae. The cypris larva attaches to the host and metamorphoses into a "kentrogon" stage, which injects the "vermigon" stage, which forms the adult branching body.

Reisser, C.E. and Forward, R.B., Jr. 1991. Effect of salinity on osmoregulation and survival of a rhizocephalan parasite, Loxothylacus panopaei, and its crab host, Rhithropanopeus harrisii. Estuaries 14(1): 102-106.