The Copepoda is now considered a separate subclass of Crustacea (Martin & Davis, 2001). Copepods are usually the most numerous animal group in plankton samples, and the number of species is also very high (about 17,000 species are known). Most copepods are planktonic, but one order, the Harpacticoida, is benthic. Also, a number of species are parasites and some of these are morphologically modified so that only the egg sacs of the females reveal their true identity.

The copepod body is short and cylindrical. The head is usually rounded, though a few species have a rostrum. There is a median, unpaired, simple (not compound) eye, the "nauplius-eye". The head is fused with the first (and in a few species also the second) thoracic segment, but there is no carapace. The thorax has 3-5 distinct, separate segments. The abdomen is narrow, cylindrical and without appendages. The anal segment has 2 caudal rami. In the free swimming species the first pair of antennae are very long and uniramous; in harpacticids and parasitic species the antennae are short. The second pair of antennae is shorter than the first pair, but also uniramous. Copepods have one pair of maxillipeds, corresponding to the fused first thoracic segment. The remaining thoracic appendages are adapted for swimming or crawling, depending on the species. In parasitic species appendages are reduced, strongly modified or absent. 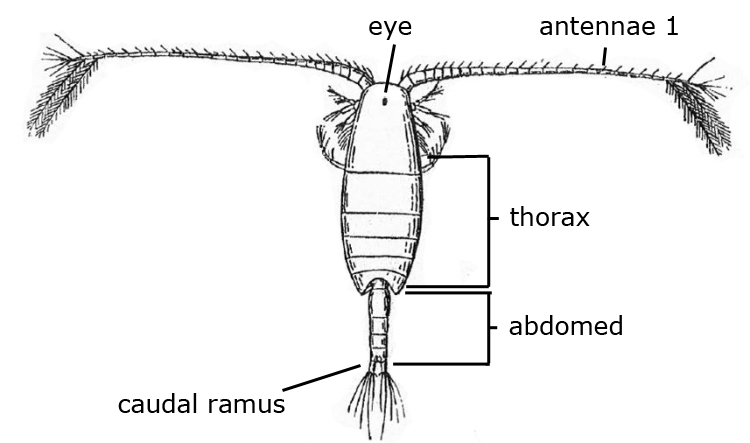 Drawing of  copepod (Colanus finmarchius) to show terminology. From Thorson 1961.

Some planktonic copepods, e.g., the large genus Calanus, shed their eggs one at a time into the water. In most copepods the females carry paired or unpaired ovisacs ("egg sacs"), attached to the last thoracic segments, where the gonepore(s) is(are) located. All copepods have a free swimming nauplius larva with 3 pairs of appendages and a median eye.

Free living copepods are important in the diet of many pelagic fish.