The Cnidaria were previously known as Coelenterata, which sometimes included the Ctenophora (now considered a separate phylum). The Cnidaria encompasses corals, sea anemones, jelly-fish and hydroids. The systematics of the Cnidaria has undergone some major changes over the past 20 years as molecular data have become available and phylogenetic analyses have improved. The changes in taxonomy are especially prominent within the class Hydrozoa, but name changes at genus and family levels are numerous, and lists of synonyms are often long. Old names continue to appear in the literature, and this lack of stability is particularly problematic in management contexts, whether for conservation or biopollution assessments.

There are three major classes: Hydrozoa, Scyphozoa and Anthozoa. The Hydrozoa are the often highly branched, colonial hydroids as well as the fire corals, Millepora spp. and the pelagic, colonial Siphonophora. Many hydrozoans have a free swimming medusa stage (see Introduction to Cnidarian medusae, ”jellyfish”), which is in fact the sexually reproducing stage rather than a larval stage. It is within this group that the majority of introduced species are found. This is most likely because the hydroid polyp stage can be part of the fouling community on ships’ hulls and other man-made structures. The Scyphozoa are the majority of the large jelly-fish, such as the common moon jelly (Aurelia aurita (Linnaeus, 1758)). Many species in this group have been known to form blooms, but so far no introduced species occur in Nordic waters. Anthozoa comprises the corals and sea anemones. Only deep water corals occur in Nordic waters, and no introduced species have been identified. For sea anemones some introduced species occur very close to our borders and/or have occasionally been found in Nordic waters. Anthozoans do not have a free swimming medusa stage; only the ciliated planula larvae are planktonic. In tropical waters the highly toxic box-jellies or sea-wasps, Cubozoa often occur in dangerous densities. 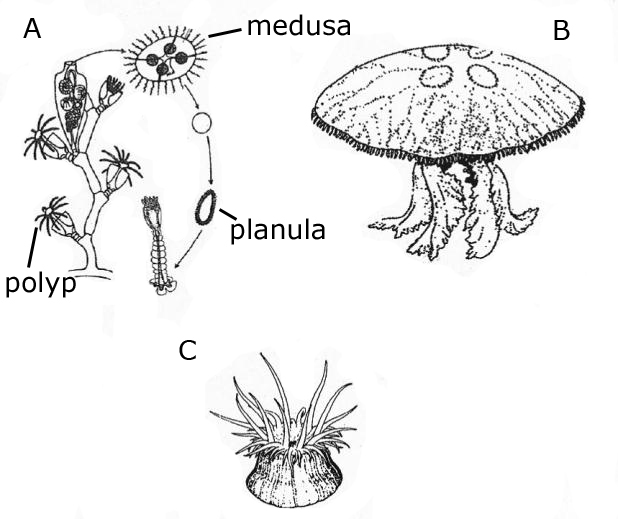 Nematostella vectensis Stephenson, 1935, starlet sea anemone. Established in the U.K. where it is considered native or possibly cryptogenic and vulnerable according to IUCN criteria. However, molecular studies have shown that it should be considered introduced (Reitzel et al., 2008). For further information see:

Diadumene cincta Stephenson, 1925. Established in the Netherlands (Wolff, 2005) and Germany (Gollasch &  Nehring, 2006). Probably cryptogenic; considered native in the U.K. and introduced to the west coast of the USA. Recorded from Norway. For further information see: