Ctenophores are almost all pelagic and form part of the "gelatinous plankton". The medusae of Cnidaria are very similar in shape, but move by rhythmic, muscular contractions of the "umbrella". Ctenophores move by ciliary movements. They have 8 bands of compound cilia, "combs", that beat in metachronic waves. Another difference between cnidarian medusae and ctenophores is that cnidarians, as the name indicates, have stinging cells, nematocysts, used to capture prey and for defence. Ctenophores do not have nematocysts. Some species have long, contractile tentacles, which may have some sticky cells, colloblasts. In cnidarian medusae tentacles are arranged around the edge of the "umbrella". In tentaculate ctenophores there are only two tentacles (which may be branched), and they insert far away from the ventral edge of the "berry-like" body. Ctenophores also have an apical organ, a sensory structure located opposite the mouth and connected to the comb rows.

There are two classes of Ctenophora: Tentaculata (the majority of species) and Nuda (containing only the order Beroida). The Tentaculata is further subdivided into several orders, of which only 2 are important in this connection: Cydippida (containing the common Pleurobrachia pileus and the Arctic Mertensia ovum), and Lobata (containing the native Bolinopsis infundibulum and the invasive Mnemiopsis leidyi). See the Marine Species Identification Portal

Until recently no introduced ctenophores were found in Nordic waters. However, during the summer of 2007 the highly invasive species Mnemiopsis leidyi spread throughout Danish, Swedish and southern Norwegian waters, and even reached the Baltic Sea. In 2008 it was discovered that what had been identified as M. leidyi in Finnish waters was actually an Arctic species, Mertensia ovum (Fabricius, 1780), but because only juvenile individuals had been collected, it had been misidentified. Most likely Mertensia ovum is also introduced into the Baltic Sea because it has never been recorded before 2008, and never in brackish water. Adult specimens are easily distinguished from M. leidyi because they have long tentacles and a reddish colour. 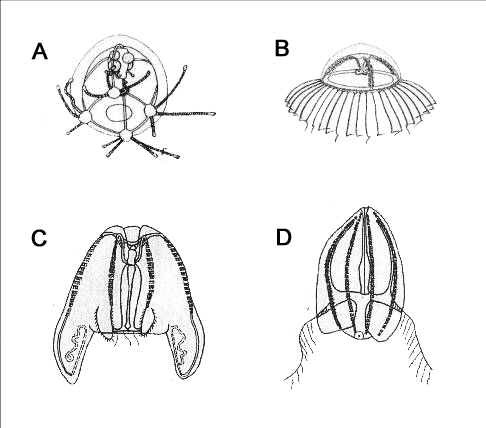 Drawings of Ctenophore and Cnidarian medusa for gross morphology

In cnidarian medusae the size and shape of the medusae depend on the taxonomic group. Hydrozoan medusae are generally small and either bell-shaped with few tentacles and a well-developed "velum" (Anthomedusae) or rather flat with numerous tentacles and a narrow velum (Leptomedusae). In Anthomedusae the mouth is at the end of a long central "manubrium", which also bears the gonads. In Leptomedusae the manubrium is short and the gonads are located along the radial canals. The third group of hydrozoan medusae are the Limnomedusae, usually found in freshwater, but occasionally in brackish waters. Scyphozoan medusae are large (as the common jelly-fish (or moon jelly), Aurelia aurita (Linnaeus, 1758)) with many tentacles and gonads attached to gastric lobes. In Cubomedusae the "umbrella" is tall, squarish with 4 large tentacles containing very powerful nematocysts and complex eyes at the bases; mostly in tropical waters. There are no established species of introduced Cnidarian medusae in Nordic waters. However, there are some records of transient species, all belonging to the Hydrozoa.

Gonionemus vertens L. Agassiz, 1862. This is a Limnomedusa with a narrow velum and many tentacles. It is apparently not established in Nordic waters, but has been recorded occasionally (Jensen & Knudsen, 2005). For more information see the Marine Species Identification Portal.

Maeotias marginata (Modeer, 1791). This is also a Limnomedusa. It is a native of the Ponto-Caspian region, and was first found in the Estonian part of the Baltic Sea in 1999 (Väinölä & Oulasvirta, 2001). It also occurs in the Netherlands, from where the original description was made. In recent times it has been introduced to North America (Mills & Rees, 2000), and possibly to France, where it was first found in 1971. However, this may be a natural spread from the Netherlands.

Bougainvillia rugosa Clarke, 1882. This is an Anthomedusa with 4 clusters of short tentacles. It is sexually mature when released from the hydroid colony. A few unpublished records collected in northern Kattegat in the 1960s and identified by expert (Jensen & Knudsen, 2005).

Nemopsis bachei L. Agassiz, 1849. This is also an Anthomedusa, but recognized by having a short manubrium and gonads along radial canals. It occurs in Germany and the Netherlands and possibly Norway (Schuchert, 2007). For more information see the Marine Species Identification Portal.

Främmande Arter 2014. Beroe ovata fact-sheet (in swedish). Available at http://www.frammandearter.se/5arter/pdf/Beroe_ovata.pdf (accessed on May 20, 2015).