There is a taxonomic problem of whether the Portuguese oyster, Crassostrea angulata (Lamarck, 1819) is synonymous with C. gigas. Apparently they produce fertile offspring, and this has been taken as proof of specific identity (Menzel, 1974; Huvet et al., 2002), but later molecular studies have shown that C. angulata is a separate species, also of Asian origin (Boudry et al., 1998; O'Foighil et al., 1998; Lam & Morton, 2004).

C. gigas is similar to Crassostrea virginica from the American east coast, but C. gigas has distinct ribs and crenulate shell margins. C. virginica has a dark adductor muscle scar and the anterior margin longer than posterior one. Crassostrea gigas usually has a very lightly pigmented adductor muscle scar, whereas the adductor muscle scar of C. angulata is rather darkly pigmented. However, these two species often form natural hybrids that are intermediately pigmented (Batista et al., 2008). C. ariakensis Fujita, 1913 (=C. rivularis Lischke, 1869, Non Gould, 1861) is another species that has been used in oyster culture (Lam & Morton, 2004) and was recently proposed for introduction to the east coast of the USA as a supplement for the declining population of C. virginica (Reece et al., 2008). 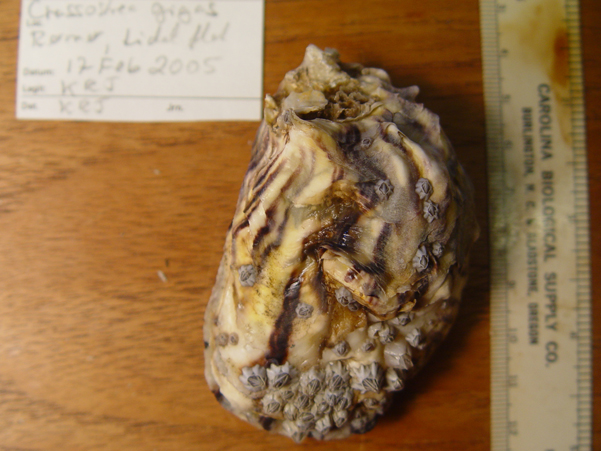 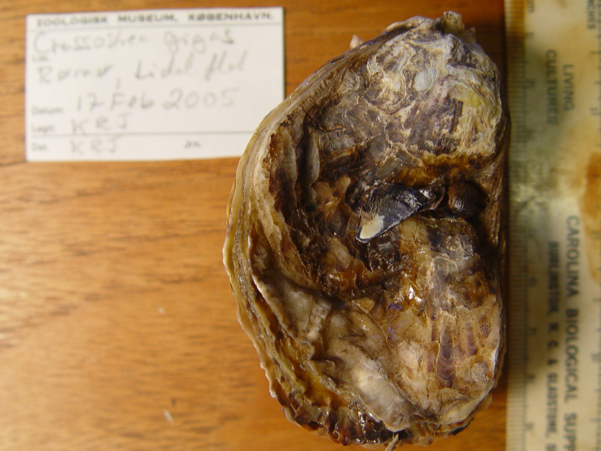 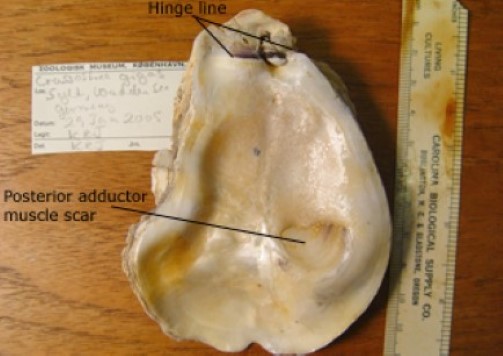 Native distribution: NW Pacific (Japan). It is difficult to outline exactly the native distribution for this species as it has been confused with other species over the years, and even molecular methods have not entirely solved the taxonomic problems. The native area for C. angulata appears to be Taiwan (Lam & Morton, 2004).

Invasive distribution: Crassostrea gigas may be the most widely intentionally dispersed species. It has been introduced in many countries following collapse of native oyster culture. Furthermore import has usually not been from the native area, but from other countries where aquaculture is practised. It was imported from British Columbia, Canada to the Netherlands in 1964 after mass mortality of native oysters (Smaal et al., 2009). The first record of recruitment outside culture facilities was in 1975 and since then it has spread to the entire Dutch coast. Adult C. gigas was imported from British Columbia to France from 1971 to 1975 after disease killed most of the previously cultured Portuguese oyster, Crassostrea angulata (Grizel & Héral, 1991). Apparently there had been some illegal imports of spat from Japan in 1966, and controlled import of spat from Japan took place from 1971 to 1977. Natural spawning, also from populations north of the Dutch border, established wild populations, which by 2000 occurred along the entire Dutch coast (Wolff & Reise, 2002). Spat of C. gigas was imported to from Scotland to Sylt in Germany in 1971, and because natural reproduction did not take place in the early years, spat had to be imported. Later wild populations were established, which spread north and south of Sylt, and in 1996 the first specimens were found in the Danish Wadden Sea (Reise, 1998). Until 2004 C. gigas was not able to reproduce in the Danish Wadden Sea, but since then a reproducing population has increased, forming reefs several places.

Crassostrea gigas also lives in the Mediterranean. The first introduction seems to be to the Thau Lagoon in France and most likely the source was oysters from the Atlantic coast of France since there are no regulations about transfer of oysters within France (Bachelet et al., 2009).

Crassostrea gigas has been introduced to the Pacific coast of North America in 1902, probably directly from wild seed in Japan (Andrews, 1980).

Crassostrea gigas has also been introduced to Australia and more recently to New Zealand.

Crassostrea gigas is a shallow water, reef forming suspension-feeder. It can filtrate about 30 l of water per hour, which is considerably more than blue mussels. It can tolerate low temperatures, down to -5° C for short periods.

Reproduction: Crassostrea gigas is a broadcast spawner, i.e., eggs and sperm are released into the water, and fertilization takes place in the water. Contrary to this, the European flat oyster Ostrea edulis is a short-term brooder, releasing the eggs into the mantle cavity where they are fertilized by sperm filtered from seawater by the gills; eggs are brooded for 8-10 days. Gametogenesis and spawning are temperature dependent. Sexes are separate, but sex-change may occur, usually during the winter (Reise, 1998), and hermaphroditic specimens are regularly found. C. gigas needs temperatures above 18° C to reproduce, and salinity should be above 23 ppt, although lower salinity has occasionally been reported. In the German Wadden Sea spawning takes place between July and September. A single female oyster may produce about 100 million eggs. Planktonic larval life lasts about 3-4 weeks. The larvae need a temperature of at least 22° C for development.

Numerous impacts have been described for C. gigas. It will form dense reefs, which completely changes the habitats for benthic organisms, creating a new habitat for hard-bottom epifauna and preventing soft-bottom infauna from settling. The high amount of faeces and pseudofaeces form suitable substrates for meiofauna and small depositfeeders, e.g. polychaetes.

Crassostrea gigas have been cultured during several periods and in several places in Denmark. However, none of these attempts were successful for any length of time. Culture in the Limfjord took place from 1972 to 198? It is unlikely that the population now occurring in the Limfjord has arisen from cultured individuals. It is more likely that larvae produced in the Wadden Sea have been transported northwards with currents or in ballast water to settle in the western part of the Limfjord (Davids et al., 2007). In the Isefjord C. gigas culture was attempted several times between 1986 and 1998, though it was not economically feasible. A small population is found near the culture site, which probably originates from settlement of larvae of cultured specimens (Wang et al., 2007). Culture of C. gigas has also been attempted in the Lillebælt (Little Belt), and there are anecdotal reports that living oysters may still be found. The American Eastern oyster (Crassostrea virginica) was cultured in Lillebælt from 1880, but it was never successful (Jensen & Knudsen, 2005).

Population size in the Danish Wadden Sea was estimated at 3300 tonnes in 2006, three times the estimated biomass from 2005 (first year for including this species) (DFU, 2007)