Oysters have been collected for human consumption since the Stone Age, and oysters were also brought on voyages as a supply of fresh food. Hence oysters have transported across natural biological barriers for hundreds and maybe thousands of years. Oyster reproduction is very temperature and salinity sensitive, so these early introductions, whether intentional or unintentional, were not always successful. Oyster fishery and culture have a long history in Europe as well as other continents, and overfishing, mass mortality due to cold winters or diseases have occurred through time. Transoceanic and transcontinental transfer of live oyster seed or broodstock is a more recent phenomenon. Because oysters are so important for aquaculture and fishery there is a huge amount of literature available, but a high proportion of this is what is generally known as "grey" (government or private sector reports, non-peer reviewed publications, student reports, etc.). When taxonomy is unclear such literature may be worse than useless because it provides seemingly interesting information about what is in fact unspecified oyster species. The fact the peer reviewed papers may also have misidentified species does not help.

Oyster shells show great variation in shape. This is mainly because they tend to settle in dense aggregations and partly overgrow each other and any other organisms co-occurring. Oysters only have one adductor muscle scar, and the position, size, shape and coloration of this scar may be used for identification. Oysters "cement" one valve, usually the left one, to the substrate, which is often a bivalve shell.

Generic separation is difficult because shell shape is so variable. Rock oysters, genus Saccostrea have "chomata", tiny fold on the inside of the shell, along the entire shell margin. In flat oysters, Ostrea, there are only a few inconspicuous chomata at either end of the hinge.In cupped oysters, Crassostrea, chomata are completely absent. In Atlantic waters of Europe only one native species, Ostrea edulis Linnaeus, 1758. The Portuguese oyster, Crassostrea angulata was assumed to be native to Portugal, but recent studies have shown that it has an Asian origin, and it may be a junior synonym of Crassostrea gigas. 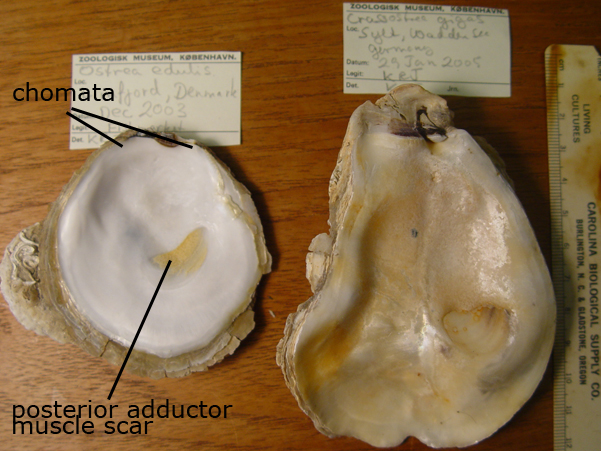 More information on oysters included in this identification key