Bivalves can be grouped into a number of functional groups i.e. oysters, boring bivalves, mussels and false mussels. To find more information on the specific groups please follow the links below

The Bivalvia is a class of Mollusca, like Gastropoda (snails and slugs), Cephalopoda (squid, cuttlefish and octopus), Polyplacophora (chitons) and Scaphopoda (tusk shells). The bivalve shell is composed of two valves ("bi-valves"). The valves are joined by a hinge composed of tiny "teeth" and usually also an elastic ligament. The number, size and shape of the teeth as well as the position of the ligament are important characters for the identification of bivalves. In addition bivalves have one or two strong adductor muscles, which are responsible for the closing of the valves. They attach to the inside of both valves and leave more or less distinct "scars" that are also used for identification. The shell is composed of calcium carbonate embedded in an organic matrix. The shell is secreted from the mantle, a thin tissue fold covering the body of the bivalve. Externally the shell usually has a thin organic layer, the periostracum, which is often pigmented. The inner surface is nacreous ("mother-of-pearl"), and scars from attachment of muscles and mantle edge are visible. 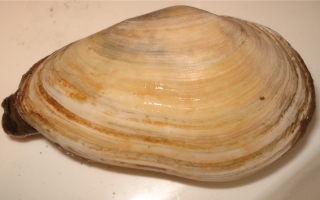 How can you tell front and back from up and down and left and right?

Hold the  bivalve shell so that the hinge faces up; this is the dorsal surface. Then look  at the inside of a valve. Does it have one or two adductor muscle scars?

Most bivalves have two, and furthermore there will be a line running parallel to  the edge of the valve, indicating where the mantle edge has been attached. At  one end this line curves inward to form a shallow or deep concavity, the pallial sinus; this is where the siphons can be withdrawn. The  siphons are located in the posterior end of the bivalve, so if you hold the  valve with the hinge upwards and the inside facing towards you, you have a right  valve if the pallial sinus is to the right and a left valve if the sinus is to  the left. In some bivalves one adductor muscle, usually the posterior one, is  much larger than the other one, usually the anterior one; this is seen in blue  mussels. Other bivalves, such as oysters and scallops, only have one adductor  muscle. These species do not have a pallial sinus because they do not have  siphons.

Some bivalves attach to hard substrates. Oysters "cement" one valve to the  substrate. Blue mussels attach by byssus threads secreted by a gland at  the base of the foot. Scallops lie on the surface of the substrate and can swim  by rapidly opening and closing the valves, expelling water from the mantle  cavity and moving in the opposite direction. Most bivalves burrow into soft  sediment with only the tips of the siphons visible at the surface. The size of  the pallial sinus indicates the length of the siphons and therefore the depth at  which the bivalve is buried. A few bivalves are capable of boring into hard  substrates such as lime-stone, clay or wood.

Several species of bivalves, which have been introduced by human activities,  occur in Nordic waters. Some are easy to identify because there are no similar  native species. Others are more difficult because they are very similar to  native species.

Many bivalve species, in particular oysters, have been cultured for many  years. Aquaculture is one of the main reasons why there are so many introduced  species. Either a few specimens escape from the culture plots (during transfer  of spat or during harvesting) and establish wild populations, or planktonic  larvae from cultured specimens disperse to neighbouring areas. Transport of live  oysters across borders and continents can also move parasites and epifauna and  –flora. Also, transport of "seed" oysters or mussels, sometimes called "spat",  can be responsible for introduction of associated fauna and flora. 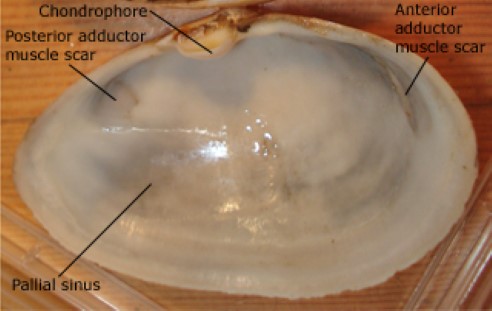 Almost all bivalves are suspension feeders. They pump water through  the inhalent siphon, across the large, complexly folded gills,  where food particles, mostly phytoplankton suspended in the water column, is  filtered out of the water, which is then pumped out through the exhalent  siphon. Bivalves can sort the filtered particles by size and/or weight so  that inorganic sand is not ingested. These rejected particles are covered in  mucus and expelled as so-called "pseudo-faeces". Bivalves are able to pump large  volumes of water and hence to clear the water column of organic particles. On  the other hand, the accumulation of faecal particles and pseudo-faeces increases  the particulate organic matter in the surface sediment, which may increase  oxygen consumption. Clearance and sedimentation are some of the ecosystem  impacts of introduced bivalves.