Taxonomic remarks: This species was described from the Thames estuary as Hydrobia jenkinsi (Smith, 1889). Soon after (Adams, 1893) it was suggested that the species was probably introduced because it had first been collected in an area that had been studied closely for many years without finding this species, and because the first localities were ports with international trade. The identity with the New Zealand species Potamopyrgus antipodarum was determined by Ponder (1988) after examination of numerous specimens from both introduced and native regions. He also identified the synonymy with a species from Tasmania and south-eastern Australia, which had previously been known as P. nigra (Quoy & Gaimard, 1835). The identity was later confirmed by molecular studies (Städler et al., 2005). Most recently New Zealand populations were re-examined and several cryptic species were described as new (Haase, 2008). This study also showed that the genus Potamopyrgus may not belong in the family Hydrobiidae, which is apparently restricted to European and North American species.

Potamopyrgus antipodarum presently is included in the family Hydrobiidae, the mudsnails (but see above). These are small, deposit-feeding prosobranchs, which means they have an operculum (contrary to most freshwater snails, which are pulmonates and therefore do not have an operculum). In Nordic marine and brackish waters there are 4 species of hydrobiids, which occupy different, though partly overlapping, habitats, depending on salinity (Fenchel, 1975a; Hylleberg & Siegismund, 1987; Brattegard and Holthe, 1997; Främmande Arter, 2006). P. antipodarum prefers the lowest salinities and is able to live in freshwater. Hence it needs to be compared to the other marine hydrobiids, which generally live at higher salinities, as well as to freshwater prosobranchs. The species of Bithynia are larger but similar in shell shape. However, their operculum has concentric growth rings whereas the operculum of Potamopyrgus and marine hydrobiids has spiral growth lines. Adult size of P. antipodarum is usually around 5-6 mm, though in its native New Zealand it can grow to 11 mm (Winterbourn, 1972). Shell morphology of all species of Hydrobiidae is highly variable, depending on environmental factors and interspecific competition (Fenchel, 1975a,b). P. antipodarum occurs only at low salinities in brackish waters and in freshwater. In some populations the shell may be keeled in some specimens, sometimes with periostracal bristles along the keel (Bondesen & Kaiser, 1949; Dussart, 1977; Ponder, 1988). The body whorl is bigger than in the 3 marine species of Hydrobia and the spire is more conical (Hylleberg, 1979). It is parthenogenetic and ovoviviparous, meaning that populations consist almost exclusively of females, and if they have embryos in the mantle, there is no mistaking them for any of the other species. The shape of the penis in males is a good character for separating the 3 species of Hydrobia (Hylleberg, 1979, but because males are very rare in P. antipodarum, this character is difficult to apply. The shape of the penis, as figured in Wallace (1985) seems to be most similar to that of H. ventrosa as figured by Hylleberg (1979). 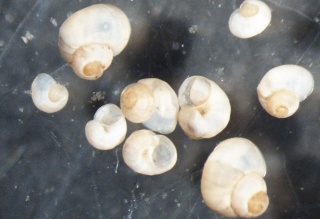 Native area: Potamopyrgus antipodarum is a native of freshwaters of New Zealand (Ponder, 1988). Early records of Holocene specimens from Europe have been re-examined and either were misidentifications or Recent specimens found in Holocene layers (Bondesen & Kaiser, 1949; Ponder, 1988). Molecular studies have identified two mitochondrial haplotypes from the North Island of New Zealand that are identical to those found in Europe (Städler et al., 2005). Genetic variation between native populations is high. This is attributed to geographic isolation in connection with glaciation (Neiman & Lively, 2004).

Invasion history: Early history of introduction of this species, generally under the synonym P. jenkinsi, has been summarized by several authors (Bondesen & Kaiser, 1949; Hubendick, 1950). The first record is from the Thames estuary (Smith, 1889). It is assumed that it had arrived some years earlier; 1859 is often mentioned because a specimen figured by Sowerby as Rissoa castanea has been identified as P. antipodarum (Hubendick, 1950), although the identity of this species has not been verified (Bondesen & Kaiser, 1949). The first confirmed record from Ireland is from 1893 (Hubendick, 1950). The first German record is from the Baltic coast in 1887 (Lassen, 1978b), though it may first have established permanently in 1908 (Nehring & Leuchs, 1999). The first Danish record is usually said to be 1915 in Randers Fjord on the Kattegat coast (Bondesen & Kaiser, 1949). However, specimens collected by the same person at the same locality in 1914 are present in the Zoological Museum in Copenhagen, and there are also two older lots of specimens identified as Potamopyrgus jenkinsi, one from a beach near Copenhagen Harbour (1897) and one from a stream just north of Copenhagen (1906). The identity of the latter two lots has not been confirmed (Jensen & Knudsen, 2005). The further spread in Denmark, including the invasion of freshwater has been outlined by Bondesen & Kaiser (1949) and by Lassen (1978a,b). It was first recorded from the Netherlands in 1913, in France 1923 and Belgium 1927 (Bondesen & Kaiser, 1949). The first record from Sweden is from the island of Gotland in the Baltic, where it was found in 1920 (Hubendick, 1950). It was found in the Åland Islands in 1926 and reached mainland Sweden in 1930 and mainland Finland in 1933 (Hubendick, 1950). It colonized the southern coasts of the Baltic Sea between 1907 and 1930 (Hubendick, 1950). In all these countries the first records are from brackish waters, and only later did the species invade freshwaters (Bondesen & Kaiser, 1949). In Finland it apparently does not occur in lakes on the mainland; only in lakes of the Åland Islands in the Baltic Sea (Carlsson, 2000). It now occurs in freshwater habitats of most European countries (Hughes, 1996; Cejka et al., 2008; Irikov & Georgiev, 2008), and was first recorded in Italy in 1961. However, it seems not to have spread to coastal, brackish waters of the Mediterranean till recently. It was not listed for the Mediterranean in the list compiled by Streftaris et al. (2005), and the first record from Greece was in 2007 (Radea et al., 2008). Potamopyrgus antipodarum was found in two Black Sea estuaries in 1951, but only in recent years has the species spread significantly from the original sites (Son, 2008). It also seems to be spreading eastwards and was recorded in a river system in Iraq in 2008 (Naser & Son, 2009).

It was first recorded from North America in 1987, and it spread rapidly over the following years. In 1991 it had reached the Laurentian Great Lakes (Zaranko et al., 1997). The clone found in the Great Lakes is identical to the clone found in freshwater of continental Europe (Fromme & Dybdahl, 2006).

The first Australian records are from 1872 in Tasmania and 1895 in Victoria (Ponder, 1988). The first record from New South Wales is from 1963, and in Australia it seems to live only in areas disturbed by human activities (Ponder, 1988). As in Europe, the first records are from estuaries and brackish waters, and only later did it spread to freshwater.

Vectors: Ponder (1988) suggested that the original introduction to Europe was from Australia, and that specimens had been transported in drinking water barrels on board ships. When water barrels were rinsed out in port, the snails were released. For secondary dispersal probably transportation by birds is important (Fretter & Graham, 1994), though canals connecting water courses have also been mentioned (Hubendick, 1950). Transport with aquaculture products is suspected for the introduction into North America, though ballast water has also been implied (Zaranko et al., 1997). Fish stocking and sport fishing have been mentioned in connection with secondary spread in Australia (Loo et al., 2007).

Potamopyrgus antipodarum lives in soft bottoms in most places (Heywood & Edwards, 1962; Dussart, 1977); in the Baltic Sea, however, it may occur on rocky bottoms (Främmande Arter, 2006). Population densities are highly variable, and densities higher than 10,000 ind. m-2 may occur at certain times of the year at certain localities (Heywood & Edwards, 1962; Siegismund & Hylleberg, 1987; Främmande Arter, 2006). It is an osmoconformer regardless of the salinity at their collection sites, but animals from freshwater died within a week at high salinities (75-100% seawater); animals from brackish water survived at 75%, but also died within 10 days at 100% at high temperature (15°C), but not at low temperature (5° C) (Todd, 1964). In Danish localities P. antipodarum occurs at salinities from 0 to 20 ppt. It often co-occurs with Hydrobia ventrosa at salinities below 5 ppt (Fenchel, 1975a,b). Compared to the 3 species of Hydrobia, P. antipodarum has a low tolerance to freezing (Hylleberg & Siegismund, 1987). Upper temperature tolerance is around 33° C (Heywood & Edwards, 1962). Data on oxygen consumption comparing animals from freshwater and brackish water are inconclusive (Lumbye, 1958; Lumbye & Lumbye, 1965). Like the three species of Hydrobia, P. antipodarum is a deposit-feeder. Preferred food particle size of P. antipodarum is about 3 times that of the Hydrobia spp. (Fenchel, 1975a). It is able to survive several weeks out of water in cool and moist conditions (Bersine et al., 2008), but contrary to the 3 Hydrobia species, P. antipodarum does not float on the surface (Siegismund & Hylleberg, 1987).

In its native area P. antipodarum is a host of several digenean trematode species, with higher infection rates in sexually reproducing populations (Lively, 1992; Lively & Jokela, 2002). Asexually reproducing clones are highly susceptible to parasitism and will most likely be replaced by other clones within a short period of time (Jokela et al., 2009). It has been suggested that the invasive success of P. antipodarum has been at least in part caused by release from parasitism (Alonso & Castro-Diez, 2008). Few studies have been made on parasitism in the introduced range, and these indicate low numbers of parasites and low rates of infection (Gérard & Le Lannic, 2003; Gérard et al., 2003; Morley, 2008).

There are 35-40 embryos in a brood (Fretter & Graham, 1994). The 3 Hydrobia species all deposit egg capsules, and in H. ulvae the eggs hatch as planktonic veliger larvae. H. neglecta and H. ventrosa deposit egg capsules with only one or a few eggs, which hatch as crawling juvenile snails (Hylleberg, 1979). The fecundity of P. antipodarum has been calculated to be 230 juveniles per year. H. ulvae produces 3450 larvae (150 capsules with an average 23 eggs per capsule) per year, H. ventrosa 50 eggs per year and H. neglecta 290 eggs per year (Lassen, 1979). The different genotypes of P. antipodarum also differ in fecundity, growth rate and other ecophysiological traits (Jacobsen & Forbes, 1997).

This has been studied almost exclusively in freshwater, and mostly in North America. Potamopyrgus antipodarum has been associated with decline in settlement of native invertebrates (Kerans et al., 2005) and with decreased growth of rainbow trout (Vinson & Baker, 2008). P. antipodarum is intermediate host to a variety of parasites, which may adversely affect final hosts (Morley, 2008). In southeastern Australia the presence of P. antipodarum seems to facilitate increased diversity in native species (Schreiber et al., 2002).

Risk analysis has been performed in Norway, and P. antipodarum has been assessed as being a high risk species on the basis of negative impact on natural habitats or ecosystems and negative impact on native species (Gederaas et al., 2007), whereas it has not been either blacklisted or placed on the "observation-list" in Denmark (Miljøministeriet, 2009).

A management plan has been developed in the USA. It is available at: http://www.anstaskforce.gov/Documents/NZMS_MgmtControl_Final.pdf last accessed 4. March 2015