As the English common name indicates, this is species often appears bright red, or at least red-spotted. They are 6-13 mm long, with the females slightly larger than males (Kipp & Ricciardi, 2007). The shape of the telson is the most important character for identifying this species. The telson is elongate, rectangular without any trace of a median cleft; it carries a row of short spines along the sides and a pair of longer spines at the posterior corners (Faasse, 1998). The antennal scale has no spines, but long, plumose setae (Verslycke et al., 2000). There are several mysid species in Nordic waters, which superficially may be confused with H. anomala, but the red coloration and the shape of the telson can be used for separation. 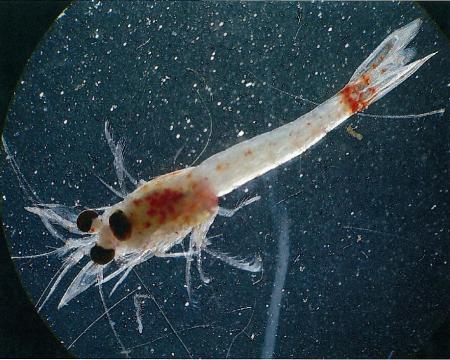 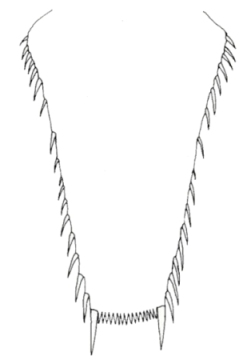 More information about Hemimysis anomala is available from Främmande Arter.

Introduced area: Hemimysis anomala is one of many small crustaceans, especially mysids, that were transferred to other water-bodies within the former Soviet Union in the 1950s and 1960s (Salemaa & Hietalahti, 1993; Ketelaars, 2004). Among other places it was introduced to some artificial reservoirs in Lithuania from where it spread to the Curonian Lagoon and further to the Baltic Sea (Leppäkoski & Olenin, 2000). H. anomala has also spread unintentionally through European rivers and canals so that at the present it is distributed throughout most European countries. The earliest record from brackish waters is from 1992 in Finland (Salemaa & Hietalahti, 1993). In 1995 it was found near Askö in the Swedish part of the Baltic Sea (Lundberg & Svensson, 2004). The next record is from 1997 in the Netherlands (Faasse, 1998), and in 1999 it was found near Antwerp in Belgium (Verslycke et al., 2000) and near Bremerhaven at the German North Sea coast (Ketelaars, 2004). At the same time it was also found in several rivers of Germany, e.g., the Rhine and the Neckar (Schleuter et al., 1998). It was first recorded in 2003 in the river Rhône in France and in 2007 it had reached the estuary in the Mediterranean (Wittmann & Ariani, 2009). Apparently it is able to disperse both upstream, as in the Rhine, and downstream, as in the Danube (Ketelaars, 2004), and the Rhône (Wittmann & Ariani, 2009). However, upstream dispersal in the Danube has also been suggested, as well as downstream dispersal in the Rhine (Bij de Vaate et al., 2002; Wittmann & Ariani, 2009). Molecular data indicates upstream movement through the Danube and both up- and downstream dispersal of two different strains in the Rhine (Audzijonyte et al., 2008). It was found along the Polish coast in 2004, but had been present there at least since 2002 (Janas & Wysocki, 2005). In 2004 it was first found in the U.K. (Holdich et al., 2006; Stubbington et al., 2008), and in 2008 it was found in a freshwater lake in Ireland (Minchin & Holmes, 2008). Hemimysis anomala has also been introduced into the American Great Lakes, where it was first found in 2006 (Kipp & Ricciardi, 2007). This population as well as that in the U.K. originates from the Danube strain, whereas the Baltic population is derived from other strains in the Ponto-Caspian region (Audzijonyte et al., 2008).

Vector: Initially intentional transfer to freshwater water bodies within the former Soviet Union. Later it has been spread unintentionally by shipping through rivers and canals, and in ballast water between the Baltic or Black Seas and the North Sea.

Hemimysis anomala is a euryhaline brackish water species, which in its native area lives in salinities from freshwater to about 19 ppt (Bij de Vaate et al., 2002; Audzijonyte et al., 2008). This is probably why it has been able to spread both upstream and downstream through different rivers. However, it has also been claimed that they are unable to swim upstream, so this form of dispersal must be aided by human activities, e.g., shipping (Ketelaars et al., 1999). It also lives at relatively great depths (to 30 m) (Salemaa & Hietalahti, 1993), but is rather intolerant to low oxygen concentrations (Wittmann et al., 1999). It prefers temperatures between 9 and 20° C, but can tolerate temperatures of 0° C (Kipp & Ricciardi, 2007), thus probably survives winters in the Baltic in deeper water. It generally forms big swarms and is then easily detected due to its red coloration (Salemaa & Hietalahti, 1993). It is mostly active during the night and hides in crevices and among stones in the daytime (Borcherding et al., 2006). It may show vertical migration, remaining in deeper water during the daytime (Ketelaars et al., 1999; Borcherding et al., 2006). The eyes of H. anomala are more adapted for blue light, corresponding to deeper water, than other Baltic mysids (Lindström, 2000). As another curiosity it can be mentioned that the statoliths (mineralized bodies inside statocysts) are made of vaterite, a calcium-carbonate mineral, whereas those of most native mysids, e.g., Praunus spp., Mysis spp., and Neomysis spp., are made of fluorite. Vaterite is found in several other Ponto-Caspian mysids (Ariana et al., 1993). Hemimysis anomala is omnivorous, feeding on zooplankton and large phytoplankton species. It has a distinct feeding preference for cladocerans, and may change community structure of local zooplankton (Ketelaars et al., 1999; Verslycke et al., 2000). Hemimysis anomala is predated upon by several fish species, which was the original purpose of the intentional transfers (Salemaa & Hietalahti, 1993; Ketelaars et al., 1999).

Reproduction: Sexual maturity is reached at a size of 5.6 mm (Bocherding et al., 2006). Breeding begins when temperature is above 8° C (Marty, 2008). Brooding females have been found in April and September and brood size is about 20-30 embryos (Borcherding et al., 2006), depending on the size of the female (Ketelaars et al., 1999). This is rather low compared to other mysid species, but the breeding season is longer, and H. anomala may produce 2-4 generations per year (Borcherding et al., 2006; Kipp & Ricciardi, 2007).

Hemimysis anomala has been claimed to be a "top-down" regulator of zooplankton systems (Pienemäki & Leppäkoski, 2004). On the other hand it is considered an excellent food source for planktivorous fish species (Kipp & Ricciardi, 2007).