The extremely long (up to 7 times the body length), hooked "tail" (caudal process) is a hallmark of this species. The tail is equipped with three pairs of small spines proximally and a denticulate loop posteriorly. Without the tail the body is only 1-3 mm long, but including the tail it is up to 13 mm long. The number of spines on the caudal process increases from one to three pairs (or four in females developing from resting eggs) as the juvenile goes through successive molts. The body is subdivided into (1) head with the large black eye and muscular second antennae, (2) thorax with 4 pairs of legs and dorsal brood pouch, (3) abdomen and (4) caudal process. The first pair of legs is considerably longer than the other three pairs. In the Caspian Sea there are a number of similar species, but these have not been identified as introduced anywhere (Mordukhai-Boltovskoi, 1965). Parthenogenetic females, gamogenetic females and males differ somewhat in morphology (Mordukhai-Boltovskoi, 1967; Grigorovich et al., 2000), but there are no native species that could be mistaken for C. pengoi. The other introduced species Evadne anonyx and Cornigerius maeoticus have very different morphologies (see Introduction to Cladocera) 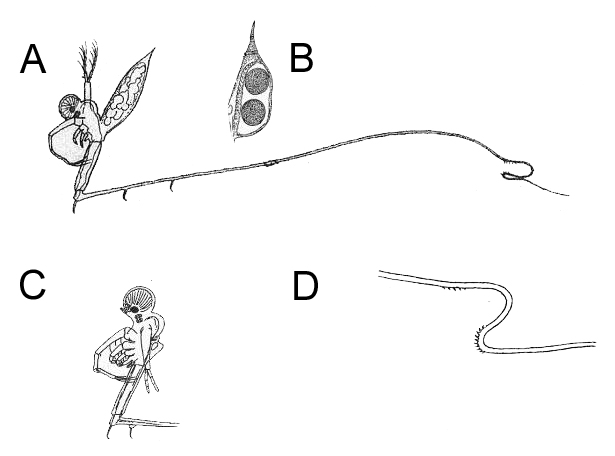 Pictures of Cercopagis pengoi can be found here

Native distribution: Caspian Sea, northern, brackish part of the Black Sea, the Azov Sea, the Volga delta, and the Aral Sea (Mordukhai-Boltovskoi, 1965). It has also been found in some coastal lakes occasionally flooded by sea water from the Black Sea (Güher, 2004). Average salinity in these lakes is 0.05-0.07 ppt. The first record from Turkish coastal lakes is from 1963 (Güher, 2004), indicating that it might have arrived during the same period as the colonization of the man-made reservoirs of the Don and Dnieper rivers (Panov et al., 2007). According to some authors, distinct morphotypes occur in the North Caspian Sea and in the Aral Sea (Gorokhova et al., 2000). It is now absent from the Aral Sea due to increased salinity (Panov et al., 2007).

Vector and pathways: Probably in ballast water (Leppäkoski & Olenin, 2000). These authors suggested that the introduction pathway was via freshwater reservoirs of the Volga and Don rivers. Molecular studies indicate that the source population is from an estuary of the Black Sea rather than the Caspian Sea, and also that the introduction to the American Great Lakes was from the Baltic Sea rather than directly from the Ponto-Caspian region (Cristescu et al., 2001). The first range expansion to man-made freshwater reservoirs was aided by construction of dams and canals (Grigorovich et al., 2000), i.e., a breakdown of natural barriers. Spread from the Great Lakes to neighboring inland lakes is suspected to have been mediated by fouled sport fishing gear (Jacobs & MacIsaac, 2007).

C. pengoi is a voracious predator feeding on zooplankton, including copepods, rotifers, mollusc veliger larvae, and other cladocerans. They use their legs to tear off the integument and then ingest the soft tissues. They are able to handle prey of almost their own body size (Grigorovich et al., 2000; Pichlov´s-Ptáčníková & Vanderploeg, 2009). C. pegoi constitutes a prey for young herring, sprat (Antsulevich & Välipakka, 2000; Gorokhova et al. 2004), smelt and sticklebacks (Ojaveer et al., 2004). In the American Great Lakes it is eaten by alewife (Makarewicz et al., 2001). In the Caspian Sea it is also eaten by the invasive ctenophore Mnemiopsis leidyi A. Agassiz, 1865 (Panov et al., 2007) and by native mysids (Gorokhova & Lehtiniemi, 2007). However, mysids as well as young fish also compete with C. pengoi for food, and C. pengoi is considerably more efficient in capturing small prey (Lehtiniemi & Lindén, 2006; Pichlov´s-Ptáčníková & Vanderploeg, 2009). Because C. pengoi removes mainly herbivorous, suspension-feeding species, phytoplankton is not grazed and ecosystem functioning may change (Laxson et al., 2003).

In its native area C. pengoi is found at salinities from 0.1 to 17 ppt and temperatures between 3º and 38º C. In the Baltic it occurs at salinities between 0.5 and 8 ppt and temperatures from 8º to 20º C (MacIsaac et al., 1999; Gorokhova et al., 2000). Apparently it may also live in freshwater in some man-made reservoirs and small lakes near the Great Lakes (Makarevich et al., 2001), but this depends on ionic composition. C. pengoi could only survive short periods of time in freshwater from Finnish lakes (Lahdes & Karjala, 2007).

Reproduction: C. pengoi reproduces mostly through parthenogenesis, and the population consists almost entirely of females. Parthenogenetic females usually carry 10-13 embryos, but may carry up to 24 (Makarewicz et al., 2001; Simm & Ojaveer, 2006). Embryonic development in the Baltic Sea takes about three days (Svensson & Gorokhova, 2007). Total generation time in the Baltic Sea has been calculated to be about 15 days, implying 5-6 generations can develop during the summer season (Svensson & Gorokhova, 2007).

Gamogenetic females have one or two large, dark, hard-shelled winter (or resting) eggs (Mordukhai-Boltovskoi, 1967; Simm & Ojaveer, 2006). Sexual reproduction may be induced by decreasing temperature. C. pengoi overwinters as resting eggs, which hatch in May (Simm & Ojaveer, 2006). Resting eggs are dark brown and about 340 µm in diameter. The thick outer membrane is shed after the first cleavage. Development till hatching takes 3 months at 3º C and one month at 13º C (Sopanen, 2008). From these eggs a spring form of parthenogenetic females arises, which has a relatively short, straight caudal process with anteriorly directed spines. This form was described as a separate species, C. ossiani, but molecular studies showed that it is identical to C. pengoi (Makarewicz et al., 2001).From the spring form the typical summer form are produced parthenogenetically, and these continue reproducing parthenogenetically over the summer. Gamogenetic females develop in September-October, but may also be present during the summer. (Makarewicz et al., 2001; Simm & Ojaveer, 2006).

The number of resting eggs found in the sediment in the Gulf of Finland is very high, 5,000-9,000 eggs m-2, and it must be concluded that only a fraction actually develops successfully to hatching. Based on the depth in the sediment they were collected from, they remain viable for several years (Sopanen, 2008). Resting eggs may pass undamaged through the gut of herring (Antsulevich & Välipakka, 2000).

Mass occurrences of C. pengoi in the Baltic has resulted in fouling of fishing gear and considerable economic losses of fish farms in the Gulf of Finland (Krylov et al., 1999; Leppäkoski & Olenin, 2000). This has also ben seen in the Great Lakes (Jacobs & MacIsaac, 2007). Some fishermen who have cleaned their nets of C. pengoi claim to have had allergic reactions (Främmande Arter, 2006; Birnbaum, 2006). Also, abundance of small native zooplankton species, including the cladoceran Bosmina coregoni Baird, 1857has decreased after the introduction of C. pengoi (Ojaveer et al., 2000). Similar changes have been observed in the Great Lakes (Benoît et al., 2002; Warner et al., 2006). Predation by smelt, a species usually restricted to deep, cold water, has caused energy transfer from warm surface water to deep cold water (Ojaveer et al., 2004).