Taxonomic notes: The type material from Uruguay is in the ZMUC (Lectotype: ZMUC CRU8221 ♂; Paralectotypes: ZMUC CRU7803 ♂ and ♀) and has been re-examined by Serejo (2004) and Serejo & Lowry (2008). They cast some doubt on whether European material is actually identical to the Uruguayan material. Platorchestia platensis has been described as a cosmopolitan species, but more recent studies have separated a number of "sibling species", e.g., P. monodi Mateus, Mateus & Afonso, 1986 from the Azores, Madeira, Guadeloupe (West Indies), Ascension Island, Florida, South Carolina and Israel (Stock, 1996), P. ashmoleorum Stock, 1996 from St. Helena Island and P. paraplatensis Serejo & Lowry, 2008 from Western Australia.

Identification to species level requires microscopic examination. Furthermore these animals often have sexual dimorphism, males generally being larger and having larger gnathopods and antennae. In Nordic waters P. platensis is most similar to the native species Orchestia gammarellus (Pallas, 1766). In freshwater and very low salinity brackish water of the Baltic there is one other non-indigenous species, Orchestia cavimana Heller, 1865. Other talitrid amphipods found in Nordic waters are Talitrus saltator (Montagu, 1808) and Talorchestia deshayesii (Audouin, 1826). Spicer & Janas (2006) provide an illustrated identification key for separating the above four species. An on-line identification key can be found at http://species-identification.org/ 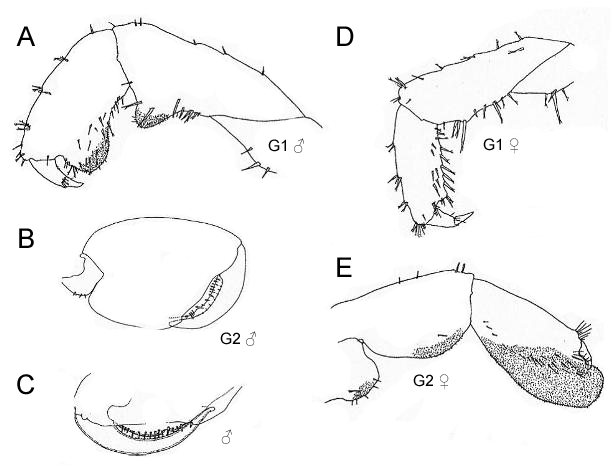 Native distribution: Unknown. The fact that it was originally described from Uruguay does not mean that this must be its native area. The type locality, Rio de la Plata, Montevideo, is probably close to an international port. Hence the species should probably be considered cryptogenic. However, looking at its "history of invasion", it seems clear that it has not originated in the NE Atlantic. Thus, it is most likely a non-indigenous species in Nordic waters.

Present distribution and invasion history: The first record after its original description is from a beach near Humlebæk in the northern part of Øresund (the Sound) in 1860. Over the next 50 years there are only occasional records from other locations in Øresund, but in the 1930s and 1940s it seems to be common on both sides of Øresund and the Swedish coast of Kattegat. It has also been found on the small islands of Læsø and Anholt in the middle of Kattegat. There are also some finds from southern Sweden and from the German Baltic coast during these decades (Dahl, 1946; Wolff, 2005). It probably arrived in the Netherlands around 1950 (Wolff, 2005), in the UK in 1978 (Wildish & Lincoln, 1979), in southern Norway in 1980, and in Poland in 2005 (Spicer & Janas, 2006). Secondary dispersal within the Baltic Sea seems to be ongoing (Persson, 2001). Furthermore P. platensis occurs in the Mediterranean (De Mattaeis et al., 2000), South China Sea (Hainan Island and Hong Kong) (Hou & Li, 2003) and Japan (Morino, 1978)

Ecology: All talitrid amphipods (sandhoppers and beachfleas) are semiterrestrial, mostly found in supralittoral beach-fringes where they either dig in moist sand (sandhoppers) or live associated with beached decaying seaweeds. They are nocturnally active (Karlbrink, 1969). Platorchestia platensis is associated with banks of decaying seaweeds on the beach (Karlbrink, 1969). Dahl (1946) provided much useful information on the biology of this species and the native Orchestia gammarellus. There seems to be some sort of competitive exclusion because the two species are rarely found together. P. platensis can tolerate up to 30% water loss (Morritt & Spicer, 1998). It is also a more active "jumper" than O. gammarellus and thus probably better escapes predators (Karlbrink, 1969). It clings tenaciously to anything floating and this behaviour may be responsible for its secondary dispersal (Karlbrink, 1969).

Reproduction: This was studied by Dahl (1946) who found that P. platensis has an extended reproductive period lasting from May to November and showing three maxima between June and October. This means that there is one more generation per year and this may account for the competitive superiority of the species.

Impacts: Competition with native species has been demonstrated for Swedish populations (Dahl, 1946; Karlbrink, 1969; Persson, 2001). P. platensis has been used as a biomonitor for heavy metals both in Hong Kong (Rainbow, 1992) and in Denmark (Casini & Depledge, 1997). Trials have been made to produce a feed for ornamental fish based on this species (Appadoo & Saudagur, 2008).