Identification: Caprellid amphipods or skeleton shrimps are highly modified amphipods with almost cylindrical bodies, pereopods 3-4 reduced and pereopods 5-7 hook-shaped, an adaption for holding on to seaweeds, hydroids or similar substrates. Most species have a pronounced sexual dimorphism, males being much larger than females. Due to their small size they are difficult to identify to species level.

This species is orange to red in coloration. The brood pouch of the female has red spots. The male of C. mutica can get up to 35 mm long. It has a long, "hairy" pereonites 1-2 and gnathopods 2. The female is much smaller (15 mm) and does not have the elongated hairy anterior segments and gnathopods. It is most similar to C. linearis Linnaeus, 1767, but C. linearis is not "hairy". Another common caprellid in Nordic waters is C. septentrionalis Krøyer, 1838, but this species is rather easily distinguished from C. mutica. It is not hairy, the two sexes are almost the same size, and the anterior pereonites are not elongate. 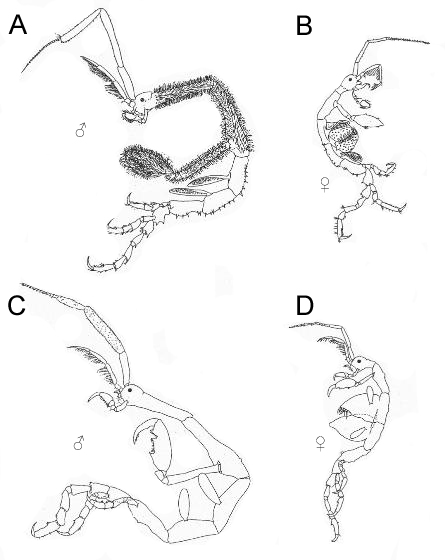 Native distribution: Sea of Japan, both on the Japanese and Russian side (Cook et al., 2007a).

Introduced distribution: Caprella mutica was first introduced to the Pacific coast of the USA in the 1970s and shortly thereafter also to the Atlantic coast (Ashton et al. 2007b). More recently it has also been discovered in Alaska (Ashton et al., 2008a). The earliest appearance in European waters is from the Netherlands where specimens collected in 1993 and following years were described as a new species, C. macho (Platvoet et al., 1995; Wolff, 2005). Next it was found in Belgium in 1998 and Norway in 1999 (Ashton et al., 2007b). A mass occurrence was detected in the German Wadden Sea in 2004 (Buschbaum & Gutow, 2005), and the first occurrence was traced back to 2000. It was first recorded in Scotland in 2000 (Willis et al., 2004) and then from southern England and Wales in 2003 (Ashton et al., 2007b), in Ireland also in 2003 and 2004 in France. The first Danish record is from 2005 when a few specimens were collected from offshore wind turbines of Horns Rev Windfarm (DONG, 2006). Molecular studies indicate separate introductions to the Pacific and Atlantic coasts of North America, though the source population has not yet been identified (Ashton et al., 2008b). Furthermore it has been introduced to New Zealand (Ashton et al., 2007b).

Vector: Unknown, but the first occurrences indicate that they have been transferred with oysters (Willis et al., 2004), though ballast water or hull fouling have also been suggested (Cook et al., 2007).

Caprella mutica is sometimes said to be omnivorous (Sano et al., 2003) sometimes a filter feeder (Michel et al., 2007; Nauwelaerts et al., 2007). In laboratory experiments C. mutica has been observed to scrape the surface of macroalgae, filter-feed and scavenge on larger particles of commercial fish feed (Cook et al., 2007b). It has a wide tolerance of temperature and salinity; upper temperature tolerance is about 28-30° C and lower below 2° C. Animals died at salinities below 15 ppt and were lethargic below 18 ppt (Ashton et al., 2007a).

Reproduction: Sexual maturity is reached at a body length of 11 mm for males and 7 mm for females (Willis et al., 2004). Brood size varies with body size of female; the maximum recorded is 82 hatchlings in one brood with an average of 25 (Cook et al., 2007b) to 33 (Nakajima & Takeuchi, 2008). Lifespan in the laboratory was about 2.5 months and most females produced 2 broods about 20 days apart.

Competition with native species of Caprella (Shucksmith et al., in press). It outcompetes C. linearis even at low densities, apparently by being bigger and more aggressive.