Teredo navalis bores into wood, forming tubes covered with calcareous lining. The shell valves are located at the bottom of the bore hole and the siphons can be extended from the small opening at the surface. Near the base of the siphons a pair of paddle-shaped pallets is attached. Pallet shape is important for identification of shipworms, and therefore species identification should be done using live animals or specimens preserved with soft parts intact. Pallets of T. navalis are forked at the tips, whereas the other two species occurring in Nordic waters have simple, paddle-shaped pallets. Shell valves are relatively small and divided into 3 distinct sections (discs) plus anterior and posterior lobes with different ornamentation. In T. navalis the auricle (=posterior lobe) is about the same size as the anterior lobe and does not extend above the hinge line (see figure). In one of the other Nordic species, Psiloteredo megotara (Hanley in Forbes & Hanley, 1848) the auricle projects above the hinge line. On the inside of the shell is a long apophysis used for muscle attachment. In T. navalis the apophysis is long and thin. In Nototeredo norvagica, the third species in Nordic waters, it is broad and only extends about half the height of the shell.

Length usually no more than 30 cm, though specimens of up to 59 cm have occasionally been encountered (Kramp, 1945; Kristensen, 1979). Diameter of bore holes usually about 9 mm. It may be difficult to identify shipworms from the surface of the attacked wood. Only the small holes where the siphons extend are visible, but the internal part of the wood may be completely penetrated by the bored tubes. 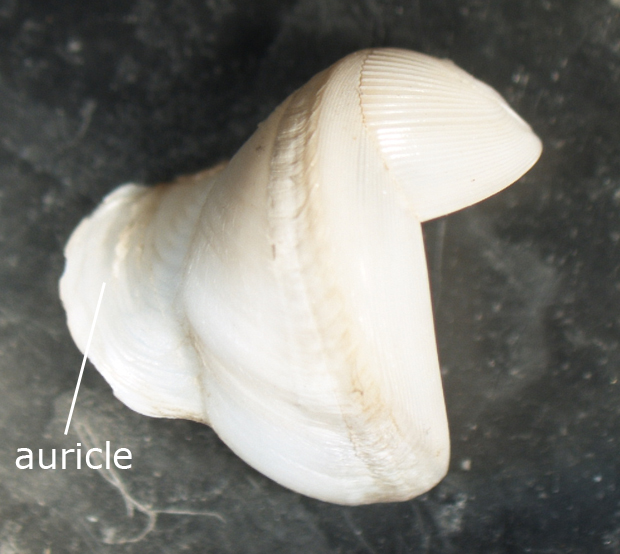 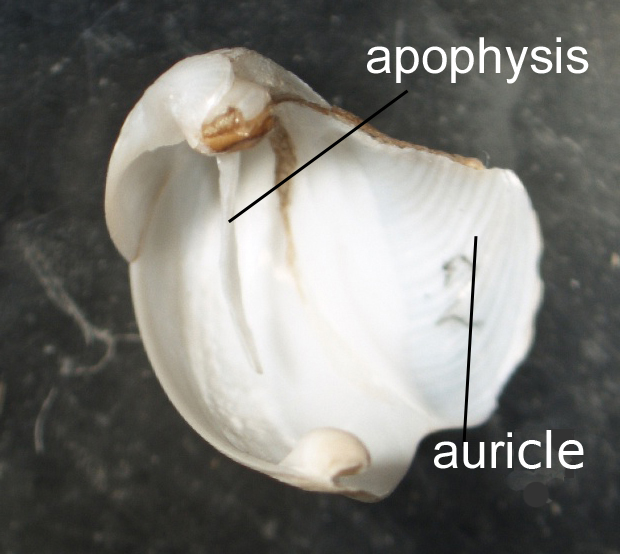 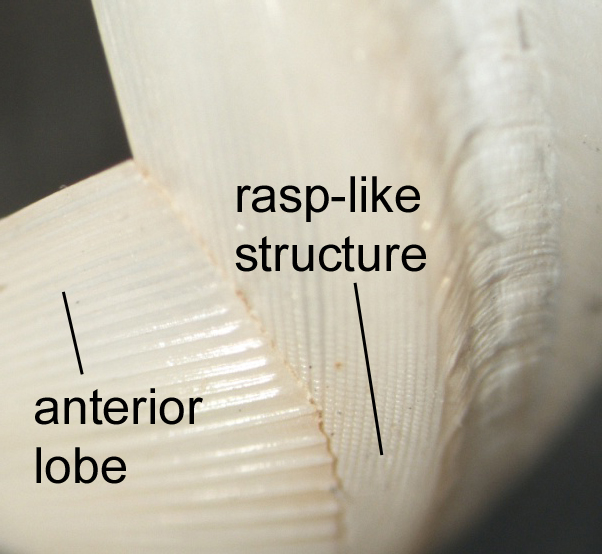 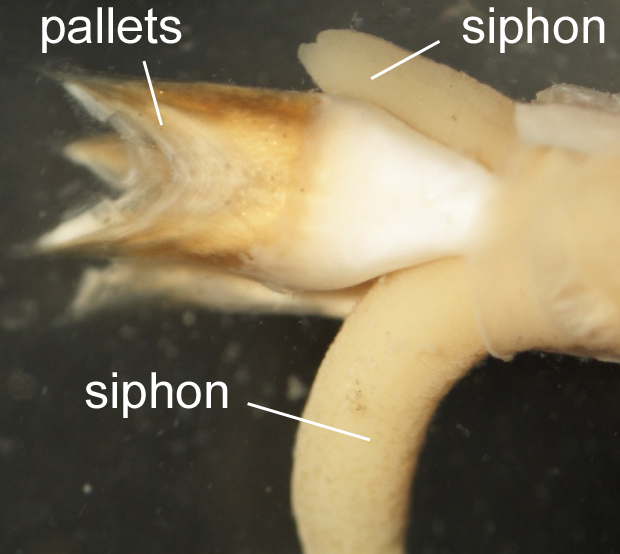 Two aspects of the life of T. navalis and other boring bivalves have elicited the curiosity of scientists for many years. How do they bore into hard substrates? Can they digest wooden material such as cellulose and lignin without the assistance of symbiotic micro-organisms? Apparently T. navalis makes its bore-holes by mechanical means only. The rasp-like denticles on the shell are used to scrape off tiny bits of wood, which are then sorted by cilia on the foot and the smaller ones are transported to the food groove of the gill from where the labial palps move the suitable bits to the mouth for ingestion (Morton, 1978). The gills of teredinid bivalves are very long, taking up most of the space of the long worm-like part of the body, which also functions as brood chamber in some species (see below). The cellulose of the wooden diet is digested by enzymes produced by symbiotic bacteria located in special structures now called bacteriocytes, but previously named the "gland of Deshayes" for the person who first described them as a gland (Waterbury et al., 1983; Distel et al., 1991). These bacteria not only are able to digest cellulose, they also fix molecular nitrogen, something that is lacking in wood and needed for normal animal metabolism (Waterbury et al., 1983). Teredo navalis is more tolerant of low salinity than the other North Atlantic species. Apparently attacks from T. navalis are more severe in years where the water temperature of the warmest month is above 19° C whereas winter temperatures seem to be of little importance (Kristensen, 1969). This means that increasing summer temperatures may in part be responsible for the recent spread of T. navalis in the Baltic. Boring activity decreases with temperatures below 10° C and stops at temperatures below 5° C. Also low salinity influences boring activity, and both feeding and boring decrease at salinities below 7 ppt (Tuente et al., 2002). Larvae die at salinities below 5 ppt. T. navalis harbors symbiotic microorganisms, which produce cellulase so they can digest cellulose from the wood they bore into (Morton, 1978), and may even have symbiotic bacteria that can fix nitrogen (Hoppe, 2002). Teredo navalis is also rather tolerant of oxygen deficiency; it withdraws the siphons, closes the entrance of the burrow and may survive for several weeks on stored energy reserves.

Reproduction: Teredo navalis has extremely high fecundity. They are protandric hermaphrodites and mature sperm can be found in animals of just 1.5 cm in length and only 3 weeks after metamorphosis (Kramp, 1945). Usually reproduction begins about 6 weeks after settling. It produces between one and five million eggs, and a female can spawn three to four times per season (New England, Grave, 1928). The embryos are brooded in the suprabranchial chamber until hatching as free-swimming veligers. There is some conflicting information about the duration of the planktonic stage, varying between a few days (Kramp, 1945; Didziulis, 2007) and up to about one month (Scheltema, 1971). In North Carolina veligers of T. navalis are released after about 5 days, and they spend about 15 days in the plankton (Culliney, 1975). The other two species apparently do not brood the larvae at any stage. The pediveliger settles by attaching a byssus thread to the wood. At first the young bivalve bores straight into the wood, but soon it turns to follow the grain of the wood (Kramp, 1945).

Native distribution: Unknown, but possibly Indian Ocean (reference?) or South Pacific (Carlton, 2009). In Australia and the USA it is considered to be native of the NE Atlantic (NIMPIS, 2002), and this has also been suggested by Didziulis (2007).

Introduced distribution: Temperate North Atlantic (to Nord-Trøndelag [sector 15] in the east and northern Canada in the west); Northeast Pacific from Alaska in the north to, California in the south; temperate coasts of Australia, New Zealand, South America? In Danish/ Swedish waters T. navalis is established in Kattegat, the Limfjord, the Isefjord, the Belt Sea and the Sound to Copenhagen and Klagshamn (Kristensen, 1969; Norman, 1977). Before 1993 T. navalis occasionally settled in the Baltic east of the Darsser-Zingst threshold (Schütz, 1961; Didziulis, 2007). They remained there for the following 2-3 years after which they died without reproducing. In 1993 there was a large inflow of saline waters and T. navalis established a population along the coast of Mecklenburg-Vorpommern, which apparently has been able to reproduce and spread further to the east. Larvae settled on test blocks suspended in the harbour of Rønne on the island Bornholm, though this site had been selected as control site outside the reach of shipworms.

First record in northern European waters: Unknown, but the earliest confirmed occurrence is from pieces of wood from a Dutch dike, which broke down in 1731 (Kramp, 1945). Species that have been introduced before 1758 (for animals) are problematic because the species had not yet been formally named and described. There are written records in Icelandic sagas that the wood of Viking ships were bored by living organisms and that the Vikings used "seal tar" to prevent attacks from boring organisms, but it is not possible to identify what kind of organism(s) was doing the damage (Vikingeskibsmuseet, 2003).

The first record from the east coast of the USA is from 1839 (Massachusetts) and in 1878 it had reached Chesapeake Bay. Thus colonization has been from north to south in the western Atlantic. On the Pacific coast of the USA T. navalis was first introduced to San Francisco Bay in 1913, and it has subsequently spread north to Alaska.

Vector: Probably in ships' timber, but possibly in drift wood. The fact that the first confirmed European record is from the Netherlands indicate that Dutch colonial merchant vessels brought it to Europe, though this is speculation.