Although the shell is externally similar to the native true piddocks Barnea candida (Linnaeus, 1758), Pholas dactylus Linnaeus, 1758, and Zirfaea crispata (Linnaeus, 1767), this species belongs to a different superfamily, the Veneroidea. It is usually referred to a separate family, the Petricolidae, but recent phylogenetic analysis has shown that it may be included in the family Veneridae (Mikkelsen et al., 2006). The true piddocks belong to the family Pholadidae, which have a distinct tooth-like attachment, apophysis, internally at the hinge-line. In P. pholadiformis the hinge have regular cardinal teeth, two in the right valve and three in the left. Also, Pholadidae often have accessory shell plates, which are not found in P. pholadiformis. 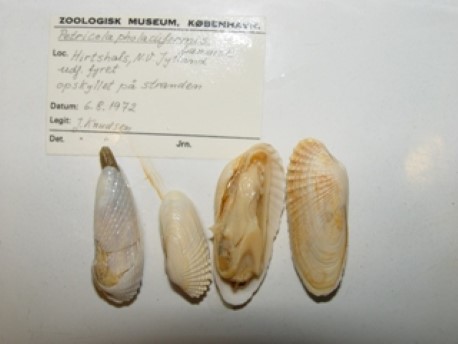 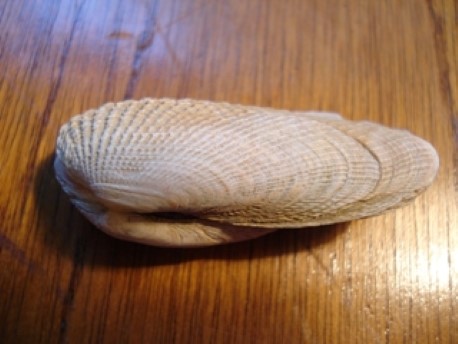 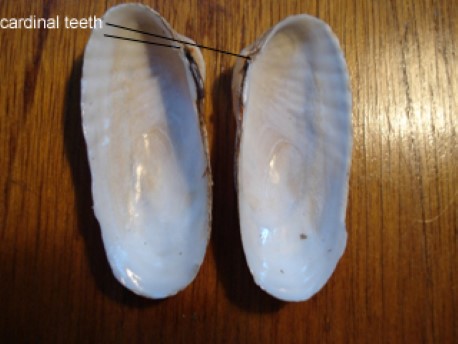 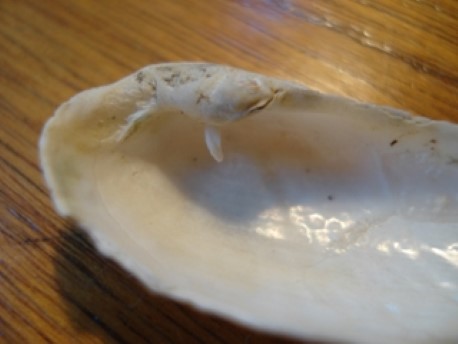 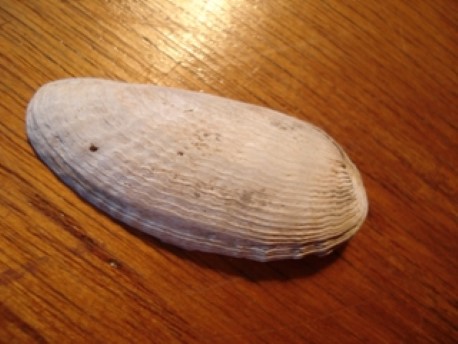 Native range: From Prince Edward Island in the north to Uruguay in the south, including the West Indies and Texas (Abbott, 1974; Zenetos et al., 2009).

History of invasion: The American piddock was introduced to the UK with American oysters around 1890; the first record is from 1893. It was then recorded in Belgium in 1899 (Loppens, 1902). The first Danish record is from 1905 in the Wadden Sea (Jensen & Knudsen, 2005), from where it has now almost completely disappeared (Jensen, 1992). This has led to placing the species on the Red List as vulnerable for the Wadden Sea (Petersen et al., 1996). There is a dubious record from the western Baltic Sea (Schlesch, 1931), but see also Nehring (2000). There are very few records from southern Norway (Vestfold to Vest-Agder county) (Brattegard & Holthe, 2001), where it was first recorded in 1955. In Sweden it occurs only at the Skagerrak and northern Kattegat coast (Främmande arter, 2006). P. pholadiformis has also been introduced to the Pacific coast of the USA, occurring only in three bays from San Fancisco to Washington (Carlton, 1992). The most recent introduction is to the eastern Mediterranean (southeastern Greece) (Zenetos et al., 2009).

The boring mechanism has been studied by Ansell & Nair (1969) and by Ansell (1970). It is not well adapted for boring. The bore-holes are oblique and the siphons extend from the opening. It is only able to bore in relatively soft types of rock, i.e. compacted clay, peat or chalk. They probably need at least a shallow concavity or a crack to start the boring activity. It is also able to burrow into sand, like other veneroid bivalves. P. pholadiformis has a high retention efficiency for particles of a wide size range (Jørgensen et al., 1984).

The few existing records of impacts seem to be at best anecdotal. One particular event has been repeated over and over again, namely that P. pholadiformis almost completely replaced Barnea candida at the Dutch and Belgian coasts (Eno et al., 1997; Främmande Arter, 2006). However, this has not been observed elsewhere, and later studies have found that B. candida is now more common than P. pholadiformis in Belgium (Wouters, 1993). For Danish waters Collin (1883) wrote that Pholas dactylus was common in certain places in the Limfjord where calcareous rock was present. Petricola pholadiformis was first found in the Limfjord in 1926, and there are no recent records of P. dactylus in the Limfjord. However, suitable substrate in the Limfjord is very restricted and therefore competition may be tougher. Probably because there are so few recorded impacts, there have been few recent studies on this species.