You have a Lepas anatifera Linnaeus, 1758 – Common goose barnacle

Taxonomic note: The year of description is variously given as Linnaeus 1758 or 1767. According to World Register of Marine Species (WorMS) the correct year is 1758 (see: http://www.marinespecies.org/ ).

The stalk (peduncle) can be extremely long, up to 80 cm, but usually is only about 4 cm long. The "head" (capitulum) is up to 5 cm long and covered by 5 smooth white plates. This species is usually attached to floating objects, such as ships' hulls, driftwood or even drifting plastic waste. There are several species of Lepas found in tropical and subtropical waters, but the species usually found in Nordic waters is L. anatifera. The meaning of the scientific species name is "bearer of ducklings". Occasionally another species, L. anserifera Linnaeus, 1767, enters the Norwegian Sea, Skagerrak and the northern North Sea. Its shell plates are more sculptured than the almost completely smooth L. anatifera. Also L. fascicularis Ellis & Solander, 1786, with a very short stalk, and L. pectinata Spengler, 1793 are rare visitors in Nordic waters. 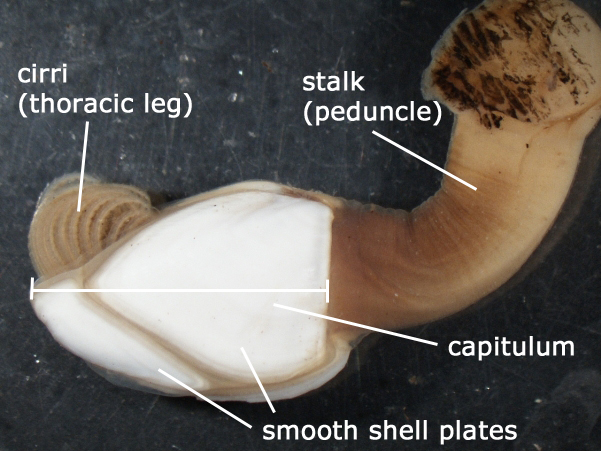 Native distribution: This is a cryptogenic species with unknown area of origin. It is more common in warmer waters of subtropical and tropical seas.

Invasive distribution: It is a cryptogenic species. Hence no specific area can be designated as introduced. It occurs almost worldwide, but may be more common in the Atlantic Ocean than elsewhere. Krüger (1927) lists several localities, some from beaches on the west coast and some from inner Danish waters, but the latter are all from ships (for some records the port of origin is also noted; Lisbon, Mediterranean; West-Indies, South America). In the UK it is recorded from the whole western coast and the western part of the south coast, but only a few places on the east coast (MARLIN – see link above). In the North Atlantic it has been recorded till Spitzbergen and Greenland (Stephensen, 1933). Lepas spp. are not included in lists of introduced species from Germany (Gollasch & Nehring, 2006), Netherlands (Wolff, 2005), Belgium (Kerckhof et al., 2007), Ireland (Minchin, 2007) or the U.K. (Eno et al., 1997). L. anatifera is included in the list of marine alien species from Norway (Hopkins, 2001), but not from Sweden (Främmande Arter) or Denmark (Jensen & Knudsen, 2005).

Vector: This species disperses with floating objects, such as ships' hulls and driftwood. It is unknown if human activities have been involved in its dispersal to Nordic waters, but it is often associated with man-made substrates (Krüger, 1927; Cheng & Lewin, 1976; Sneli, 1983).

Lepas anatifera is most abundant in tropical and subtropical waters with temperatures above 18° C but below 34° C (Patel, 1959). It attaches to almost any floating objects, such as ships' hulls, wood, plastic – even turtles (Cheng & Lewin, 1976; Frick et al., 2003; Kitsos et al., 2003), and may also attach to fixed structures off-shore (Sneli, 1983). There are also indications that they may attach to attached macroalgae (Boëtius, 1952). L. anatifera cannot tolerate stagnant water (Patel, 1959) or low salinity. In the laboratory L. anatifera feeds on zooplankton and is not able to tolerate starvation for any length of time (Patel, 1959). The nudibranch Fiona pinnata (Eschscholtz, 1831) is a specialized predator on gooseneck barnacles (Thompson & Brown, 1984).

Molting includes the integument of the body parts inside the mantle cavity, but not the lining of this cavity nor the stalk. Molting takes place every 8 to 27 days depending on temperature and food availability (Patel, 1959).

Reproduction: It has been claimed that Lepas spp. cannot reproduce in Nordic waters. However, settlement of larvae has been observed at a Norwegian off-shore facility (Sneli, 1983). L. anatifera is hermaphroditic, but requires cross-fertilization. Breeding requires a minimum temperature of 15° C and stops at temperatures above 30° C. Reproduction sets in about 4-5 weeks after settlement. Ovaries and newly spawned eggs are blue. The size of eggs and embryos depends on temperature, but generally embryos are about 250 µm long. During embryonic development the color changes to pink. Larvae hatch after 7 days at 25° C (Patel, 1959). The nauplius II larvae have long, conspicuous, barbed abdominal processes (Stephensen, 1933).

When attached to ships' hulls in large amounts gooseneck barnacles may slow down the speed of the vessel. Goose barnacles may also attach to aquaculture, mariculture, and other off-shore equipment (Castro et al., 1999) and thus be a nuisance to these operations. Drifting solid wastes often function as substrate, but it is unknown whether this slows down or speeds up degradation of such waste.