Taxonomic note: The genus Rapana is sometimes referred to the family Muricidae (e.g., DAISIE, 2006), sometimes to Thaididae (e.g., Koutsoubas & Voultsiadou-Koukoura, 1991; Mann & Harding, 2000). According to World Register of Marine Species (WoRMS) the family should be Muricidae, and the Thaididae is considered a synonym of Rapaninae, a subfamily of Muricidae (see Bouchet & Rocroi, 2005).

Rapana venosa is a large, 9-16 cm shell length, species with a heavy, strongly sculptured shell. Specimens up to 17.5 cm have been recorded in the Black Sea (Micu et al., 2008). The spire is relatively short, less than half the height of the aperture. Colour varies from dark to light brown, often with darker spiral lines. Specimens collected on sandy bottoms tend to be more lightly coloured than specimens from rocky habitats. The inside of the aperture is often dark orange or yellowish brown. There is no other gastropod in European waters that can be misidentified for R. venosa. The large size, the pigmented inside of the aperture and the short but wide siphonal canal are unique characters for this species. In its native region there are a couple of other species whose range may overlap slightly (see below). Juvenile specimens do not have the orange aperture and the spire is relatively higher. This means that juveniles can be mistaken for some of the native whelks, e.g. Ocenebra erinacea (Linnaeus, 1758), Buccinum undatum Linnaeus, 1758 or the invasive Ocenebra inornata (Recluz, 1851) (=Ocinebrellus inornatus) and Urosalpinx cinerea (Say, 1822), which have not yet invaded Nordic waters. However, sculpture is different. 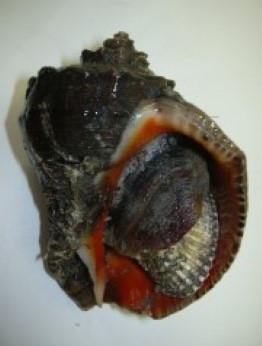 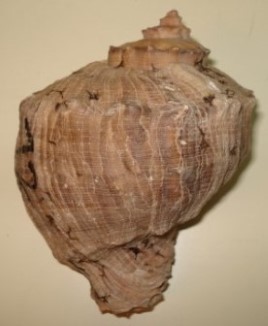 Information on other species:

Native area: Rapana venosa is a native of the Yellow Sea, Bohai Sea, East China Sea, and the Sea of Japan. Molecular studies have shown that there is high genetic diversity among populations and that this is not related to geographic distance between populations. Populations in the native area have been overexploited and have severely declined (Yang et al., 2008). Other species of Rapana from the western Pacific are R. bezoar (Linnaeus, 1767) is common in the South China Sea, but also occurs in and R. rapiformis (Von Born, 1778) from the Indian Ocean and the Red Sea.

Records from the Red Sea (e.g., Seyhan et al., 2003) most likely refers to R. rapiformis. The record of shells inhabited by hermit crabs in New Zealand is probably shells thrown overboard from Asian fishing vessels (Pastorino et al., 2000). Also, a few records from the Pacific coast of North America are assumed to have been introduced with seed oysters, but unable to establish (ICES, 2004).

Rapana venosa has also been introduced to Chesapeake Bay on the east coast of the USA where it was first found in 1998 (Mann & Harding, 2000), and in 1998 it was found in La Plata estuary between Uruguay and Argentina (Pastorino et al., 2000; Giberto et al., 2006; Lanfranconi et al., 2009; Carranza et al., in press). Size of specimens first collected in Chesapeake Bay indicated that it may have been present for up to 10 years prior to detection (Mann & Harding, 2000).

Molecular studies have shown that only one haplotype occurs in the introduced areas, and this occurs in only two native populations, Japan and Korea, indicating that one of these must be the source population for the Black Sea introduction (Chandler et al., 2008). This also supports the idea that introduction was probably with oysters, Crassostrea gigas, imported from Japan. It is not possible to say whether the Adriatic population has been established by natural dispersal from the Black Sea or by human introduction, also from the Black Sea. (Chandler et al., 2008).

Vector: The original vector for its introduction to the Black Sea is unknown, though association with import of oyster spat is the most likely since vessel operation was hampered by World War II (ICES, 2004). Ballast water has also been suggested (Gomoiu et al., 2002) as has hull fouling (egg cases attached to hull) (Uyan & Aral, 2003). Introduction to the Adriatic Sea may also have been with bivalves imported for culture. Ballast water is suspected to be the vector for introducing R. venosa to the USA, either from the Black Sea or from the Mediterranean (Mann & Harding, 2000).

Rapana venosa is a predatory gastropod feeding on bivalves. Small snails feed by drilling through the bivalve shell, whereas large snails can attack and consume bivalves without leaving a drill-hole (Harding et al., 2007a). They grasp the shell of e.g. Mercenaria mercenaria (Linnaeus, 1758) along the margin, cover it in mucus and, when the valves gape, they insert the proboscis (Harding & Mann, 1999). Drilling and edge-chipping leave scars that can be identified, but the "suffocating" method of killing prey does not (Harding et al., 2007a). In the USA it includes the large clams, Mercenaria mercenaria and Mya arenaria Linnaeus, 1758, which do not have native predators in the area, as well as Crassostrea virginica (Gmelin, 1791), Geukensia demissa (Dillwyn, 1817) and Mytilus edulis Linnaeus, 1758 in its diet (Harding et al., 2007a), and Mercenaria is a preferred prey item (Harding & Mann, 1999). In the Adriatic Sea R. venosa feeds on Mytilus galloprovincialis (Lamarck, 1819), Ruditapes philippinarum (Adams & Reeve, 1850) and Anadara (Scapharca) inaequivalvis (Bruguière, 1789). The latter two species are both introduced (Savini & Occhipinti-Ambrogi, 2006). Growth has only been studied in the Black Sea and in the laboratory for Chesapeake Bay specimens. The first year rapa whelks from the Black Sea grew to between 20 and 40 mm, and mean shell size for the second year was 65 mm and 92 mm for the sixth year. Laboratory experiments with specimens from Chesapeake Bay yielded much higher growth rates, 40-50 mm in 5 months and more than 60 mm in one year (ICES, 2004). R. venosa may have a life-span of 12-18 years. Juveniles are very rarely found in the wild (Savini et al., 2004). They are said to feed on barnacles (ICES, 2004).

Rapana venosa has broad ecological tolerances of temperature, low salinity, oxygen depletion and pollution (Zolotarev, 1996). In its native range it tolerates temperatures between 4° and 27° C, and in the Black Sea between 7° and 24° C. In the Sea of Azov it is absent from those parts that are ice-covered during winter, but survives continuous salinity below 12 ppt (ICES, 2004). In Chesapeake Bay R. venosa occurs at salinities from 18 to 28 ppt, in the Black Sea from 25 to 32 ppt (Mann & Harding, 2000). It seems to prefer sandy or sandy-muddy bottoms in the introduced areas (Koutsoubas & Voultsiadou-Koukoura, 1991; Harding & Mann, 1999; Seyhan et al., 2003). Rapa whelks are active burrowers and may remain completely buried in the sediment with only the tip of the siphon sticking out (Harding & Mann, 1999).

The shells of R. venosa from the Adriatic Sea are often bored by the sponge Cliona lobata, which is an Atlantic species not observed in the Mediterranean prior to the appearance of R. venosa. Barnacles, serpulid polychaetes, oyster and mussel spat are also commonly found as epifauna (Savini et al., 2004). In Chesapeake Bay shells are often bored by the polychaete Polydora websteri (Mann & Harding, 2000), and in the Black Sea the Polydora ciliata is a shell borer (ICES, 2004). Epifauna is most abundant in whelks living on hard substrates (Mann & Harding, 2000).

Rapana venosa has been shown to accumulate toxins responsible for paralytic shellfish poisoning (PSP). The toxins are produced by phytoplankton species Alexandrium tamarense, which also occurs in Nordic waters. The algae are ingested by suspension-feeding bivalves, and these are then consumed by the rapa whelk (Ito et al., 2004). On the other hand, high mortality of R. venosa has been recorded during a bloom of the toxic alga Alexandrium monilatum in Chesapeake Bay (Harding et al., 2009). The potent toxin tetrodotoxin has been found in R. venosa from Taiwan, but the source of the toxin is unknown (Hwang et al., 1991). Whelks also produce their own toxins for paralyzing their prey (Seyhan et al., 2003; Savini & Occhipinti-Ambrogi, 2006). R. venosa accumulates various environmental pollutants, such as heavy metals (Bat et al., 2000; Liang et al., 2004), DDT and other organic pesticides (Yang et al., 2004) as well as butyltin compounds such as TBT (Yang et al., 2006), and imposex, although only early stages, has been detected in Chesapeake Bay whelks (Mann et al., 2006).

Rapana venosa is a predator of bivalves, including commercial species as oysters. Its introduction to the Black Sea has been correlated with the collapse of local oyster production as well as seriously impacting mussel populations (Zolotarev, 1996). It also interferes with cuttlefish fishing in the Adriatic Sea. They use the nets for attaching spawn, and they add a lot of weight to the nets (Savini et al., 2004). R. venosa has been suspected of impacting populations of commercially important bivalves in several areas, e.g. Mercenaria mercenaria in Chesapeake Bay and Ruditapes philippinarum in the Adriatic Sea. However, in most cases calculated consumption rates are very low compared to existing bivalve stocks. Mussels cultured on hanging ropes not touching the bottom, are considered out of reach of rapa whelks (Savini & Occhipinti-Ambrogi, 2006). Competition with other predatory gastropods, such as oyster drills and moon snails, has also been suggested as a likely impact (ICES, 2004). The long planktonic stage is suitable for transfer to new regions in ballast water, and the epifauna on shells may be transferred with live whelks exported for food. Empty shells may be used by hermit crabs (ICES, 2004).

The shells of R. venosa were used for tourist souvenirs shortly after its introduction to the Black Sea, and after 1980 also the meat has been exploited (Uyan & Aral, 2003). Fishery is now primarily operated from Turkey and Bulgaria. Overfishing may have occurred as the Turkish catch decreased from 10,000 tonnes in 1988 to 2000 tonnes in 1997 (Uyhan & Aral, 2003). In its native area R. venosa is a valuable fisheries resource. Commercial size is 90-160 mm, and market price in China is 7-9 USD per kg (Yang et al., 2008).

Management Scientists from Virginia Institute of Marine Science have had a "bounty" program where local clam and crab fishers were paid a token fee for each rapa whelk they donated to the scientists (Harding & Mann, 1999). However, the rapa whelks are still present.