Crepidula fornicata usually sit in stacks on a hard substrate, e.g., a shell of other molluscs, boulders or rocky outcroppings. Up to 13 animals have been reported in one stack, but usually 4-6 animals are seen in a stack. Individual shells are up to about 60 mm in length, cap-shaped, distinctly longer than wide. The "spire" is almost invisible, slightly skewed to the right posterior end of the shell. Shell height is highly variable. Inside the body whorl is a characteristic calcareous shell-plate (septum) behind which the visceral mass is protected. There is no operculum. Shell colour is usually pale yellowish, often with an irregular pattern of reddish or brown spots or streaks. The high variability in shell coloration is reflected in the number of synonyms referring to appearance (maculata, violacea, roseae). Only other species of Crepidula are likely to be confused with this species. Recently another species has been found introduced in northern Spain (Collin et al., 2009), and it is possible that with increasing water temperature the species will disperse northwards. There are also two or three species that may be native to the Mediterranean, C. moulinsii Michaud, 1829, C. gibbosa Defrance, 1818 and C. unguiformis Lamarck, 1822 (WORMS). In addition C. aculeata (Gmelin, 1791) (=C. calyptraeiformis Deshayes, 1830) has been introduced into the Mediterranean from the Indo-Pacific (Ciesm, 2003). 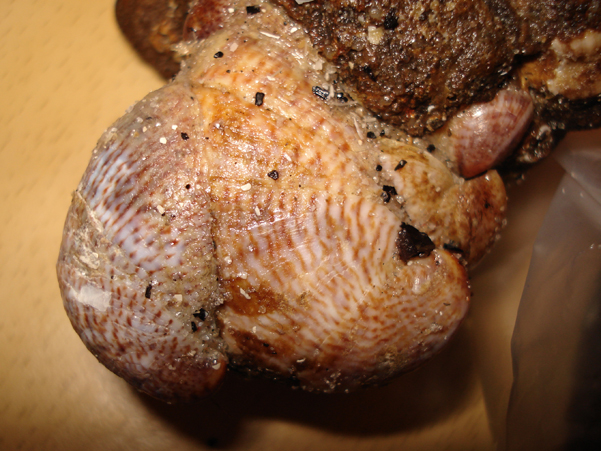 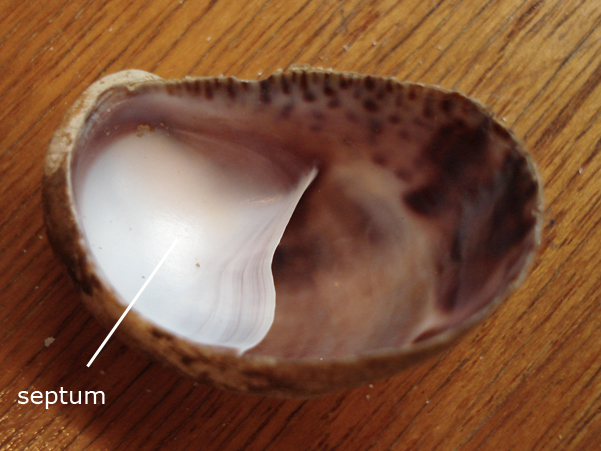 Other species of Crepidula: see The Global Invasive Species Database

Native area: Crepidula fornicata is a native of eastern North America, from the Gulf of St. Lawrence to the Caribbean (Blanchard, 1997; ISSG, 2005). Fossil shells have been found in the Pleistocene of Florida (as C. roseae). There are several other species of the genus in this region, but until recently only C. fornicata has been invading European waters.

Crepidula fornicata is assumed to have been introduced to the U.K. between 1887 and 1890 (Rayment, 2008), though the first confirmed record appears to be from 1872 (Minchin et al., 1995). The species remained locally on the southeastern coast the U.K. till around 1940 (Minchin et al., 1995). It is presently distributed around the south-eastern, southern and south-western coasts of the U.K. (Blachard, 1997; Rayment, 2008). C. fornicata was transferred to Ireland with live American oysters in 1902, but they did not establish at this time. Although slipper limpets were repeatedly introduced with oysters, they have apparently not yet established a reproducing population (Minchin et al., 1995; Minchin, 2007). On the European continent a few specimens were recorded between 1911 (Belgium) and 1930 (Netherlands), but they did not become abundant till after 1933 (Minchin et al., 1995; Blanchard, 1997). It seems that slipper limpets were repeatedly transported on hulls of ships during World War II from the U.K., USA and Canada to France (Minchin et al., 1995). In France multiple introductions have occurred. The first record is from 1949, so possibly the first introduction was from ships' hulls during WWII, but in the 1970s it was introduced with spat of Pacific oysters, Crassostrea gigas from Japan and from the west coast of the USA (Moulin et al., 2007). The first records from Denmark are from 1934 when slipper limpets were found in the Danish Wadden Sea as well as in the Limfjord (Spärck, 1935, 1950). It is assumed that it had been introduced to the Limfjord with oysters from the Netherlands or from the U.K., whereas its occurrence in the Danish Wadden Sea may be a natural secondary dispersal through planktonic larvae from populations already established in the Dutch Wadden Sea. Presently it is distributed in the Wadden Sea, the Limfjord and Kattegat north of the Limfjord (Jensen & Knudsen, 2005). The first German record is also from 1934, and it is assumed that introduction was with European oysters, Ostrea edulis, from the Netherlands (Thieltges et al., 2003). The status of the population was not followed after the early 1950s when oysters became extinct in the Wadden Sea. Only after C. fornicata became a nuisance on mussel beds did studies resume (Thieltges et al., 2003). In Sweden slipper limpets were first encountered in 1950 in Bohuslän (Hessland, 1951). This was most likely secondary dispersal through larvae from Danish waters. In Norway it was first found in 1962 and it seems to be established but rare along the south coast (Sjøtun, 1997). Crepidula fornicata also occurs in northern Spain where it has probably been introduced with Pacific oysters from France (Blanchard, 1997). There are several records from the Mediterranean, but restricted to a few areas of intensive oyster and mussel culture, e.g. the Thau lagoon and Lake Faro in Italy (Blanchard, 1997).

Besides Europe C. fornicata has been introduced to the west coast of the USA and to Japan and Uruguay (Blanchard, 1997).

Vector: The original introduction was with American oysters, Crassostrea virginica, for culture in the U.K. Secondary introduction to other countries in Europe may have been with oyster spat, either Ostrea edulis or later C. gigas. Slipper limpets can attach to practically any hard substrate, and may also be transported with live mussels or on boat hulls. Secondary dispersal through planktonic larvae has also been important for the successive spread of this species.

Crepidula fornicata is a suspension feeder, filtering particulate material, such as phytoplankton through the large gill (Orton, 1912b; Jørgensen et al., 1984). The mechanism involves two mucus nets of which one excludes very large particles from entering the mantle cavity and the other traps food particles on the gill (Werner, 1951, 1953). This mechanism is highly efficient and traps particles down to 2-4 µm (Jørgensen et al., 1984; Barillé et al., 2006). The presence of the mucus nets has been questioned by Beninger et al. (2007). Feeding efficiency has been studied extensively because contradictory results on food competition with various commercial bivalves, especially oysters and mussels, have been obtained (Montaudouin et al., 1999; Thieltges, 2005; Barillé et al., 2006; Thieltges et al., 2006; Beninger et al., 2007; Blanchard et al., 2008). Some authors claim that there is no qualitative particle selection (Beninger et al., 2007), but early studies showed at least a selection for size of particles (Orton, 1912b). Particles rejected by the slipper limpet are embedded in mucus and discharged as "pseudo-faeces", and biodeposition by C. fornicata may significantly change ecosystem functioning (Ehrhold et al., 1998; Ragueneau et al., 2005) (see Impacts).

Crepidula fornicata lives from shallow subtidal to a depth of 60m (Blanchard, 1997). It can use almost any hard substrate, from empty shells and live mollusc or crustacean shells to large pebbles and rocks. Population densities have increased dramatically in recent years. Around Sylt in the Wadden Sea there has been an eightfold increase from less than 200 ind. m-2 in 2000 to more than 1200 ind. m-2 in 2006, corresponding to a fresh weight of more than 5kg m-2 (Thieltges et al., 2009). In France even higher densities occur in many areas. Here population density has increased fivefold between 1985 and 1994 and up to 9000 ind. m-2, corresponding to a fresh weight of 18 kg m-2 have been recorded (Ehrhold et al., 1998). It has been estimated that the population in the Bay of Mont-Saint-Michel increased by 50% between 1996 and 2004 (Blanchard, 2009). Even in the Danish Limfjord increases in population densities have been noticed, although quantitative data are lacking. In 1998 up to 160 ind. m-2 were found in a locality where blue mussel, Mytilus edulis, density was more than 400 ind. m-2 (Hedeselskabet, 2003). In 2008 and 2009 the wet weight of C. fornicata equalled that of M. edulis in some stations in the Limfjord (C.Aa. Jensen, pers. comm.).

Reproduction: Crepidula fornicata is a protandric hermaphrodite. Individuals at the bottom of a stack are females, those on the top are males (Orton, 1909; Collin, 1995). There may be functional hermaphrodites in the middle of a stack (Orton, 1909). Transformation from male to females takes about two months (Coe, 1938; Chippenfield, 1951). Young males are able to move about searching for suitable partners. Molecular studies of paternity have shown that some offspring have been fertilized by males not present in the stack of the mother (Gaffney & McGee, 1992). Eggs are deposited in stalked capsules containing about 250 eggs (Chipperfield, 1951). The eggs have a diameter of about 160 µm (Pandian, 1969). Females brood the eggs until veliger larvae are released. The larvae are about 0.4 mm long when released and about 1 mm when they metamorphose (Pechenik et al., 2004). Growth of the larvae is highly temperature dependent and takes about 2 weeks longer at 18° C than at 24° C (Pechenik, 1984). It seems that growth rate is also genetically determined (Le Cam et al., 2009), and also dispersal potential may be genetically dependent (Untersee & Pechenik, 2007).

Crepidula fornicata has been used extensively for research both in its native and introduced areas. Hence it should be possible to make a good risk assessment of this species. An unexpected positive impact is that its feeding activities may prevent blooms of harmful algae, and also regenerate silica so that diatoms are not limited by lack of this mineral (Ragueneau et al., 2002). Another positive effect is that it decreases predation by seastars, Asterias rubens, on those blue mussels that have slipper limpets on the shells (Thieltges, 2005a). In the Netherlands C. fornicata was used for human consumption during WWII, but cold winters killed most of the slipper limpets (Korringa, 1942). It is noteworthy that C. fornicata does not appear to be a host of any helminth parasites, and it may even descrease infection rates of nearby bivalves by feeding on the invasive stages (Pechenik et al., 2001; Thieltges et al., 2009)

Crepidula fornicata is a competitor for space of commercially fished scallops in France (Frésard & Boncoeur, 2006). Also, it competes with cultured oysters for space, and in some localities for food as well (Montaudouin et al., 1999; Decottignies et al., 2007a,b; Blanchard, 2009). In the Wadden Sea there is increased mortality of blue mussels in mussel-beds invaded by slipper limpets, and also reduced growth in surviving mussels (Thieltges, 2005b). Mussels need to produce more byssus to compensate for the extra weight of attached slipper limpets (Thieltges & Buschbaum, 2007).

Probably the most severe impact of C. fornicata is the biodeposition of faeces and pseudo-faeces. It has been calculated that one slipper limpet produces 1.6 mg dry weight per hour, and that the total annual biodeposition is almost three times the total biomass (Ehrhold et al., 1998). This will no doubt influence growth rates of oysters and mussels, or other commercially important shellfish.

A serious attempt to exterminate C. fornicata was attempted at certain places in the U.K., where a price was set per limpet in 1949; unfortunately the price was decreased dramatically because the limpet had proliferated in spite of the price (ISSG, 2005).