You have a Styela clava (Herdman, 1881) – Clubbed tunicate or leathery sea squirt

This is a relatively large (often >10 cm long), stalked, solitary sea aquirt, which is often found associated with man-made structures, seaweeds or shellfish. It has a warty exterior and a long stalk. There are several native species of Styela, none of which have the long stalk, e.g. S. rustica (Linnaeus, 1767), S. coriacea (Alder & Hancock, 1848), S. gelatinosa (Traustedt, 1886), and S. atlantica (Van Name, 1912). 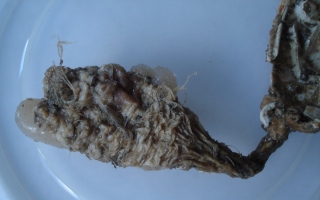 Vector: It has been proposed that S. clava was introduced to Europe as fouling on warships returning from the Korea war in 1953. It was probably introduced to the Danish Limfjord with oyster spat, and ballast water has been suggested as the vector in Canada.

Recently Styela clava was found in the Mediterranean (Davis & Davis, 2008).

Styela clava has also been introduced to both sides of the American continent (Lambert & Lambert, 1998; Locke et al., 2007).

Styela clava also has been introduced to Australia, where it was first recorded in 1976 (Holmes, 1976) and New Zealand (Biosecurity New Zealand – see URL above).

This is a fouling species, and because it is very big it also serves as a substrate for other fouling organisms, mostly other species of tunicates. It is a great nuisance to mussel farms because it attaches in dense clumps to equipment, including hanging ropes. Densities of 1000 individuals per m² have been recorded (Minchin & Duggan, 1988). Management in New Zealand focuses on preventing further spread and they have published an assessment report (available at http://www.biosecurity.govt.nz/files/pests/salt-freshwater/styela-clava-population-management.pdf) last accessed 3. March 2015. The state of Washington has an active management program and has published several reports that are available on their web-site (see: http://wdfw.wa.gov/ais/tunicates.html and http://wdfw.wa.gov/publications/00805/ last accessed 3. March 2015)

It has been attempted to market it as a seafood specialty (Karney & Rhee, 2009).