You have a species of Gammaridae

There are many species in Gammaridae,  which are difficult to separate, and several of these species are  invasive; only Gammarus tigrinus will be treated in detail here; other  species are listed below in the fact sheet. 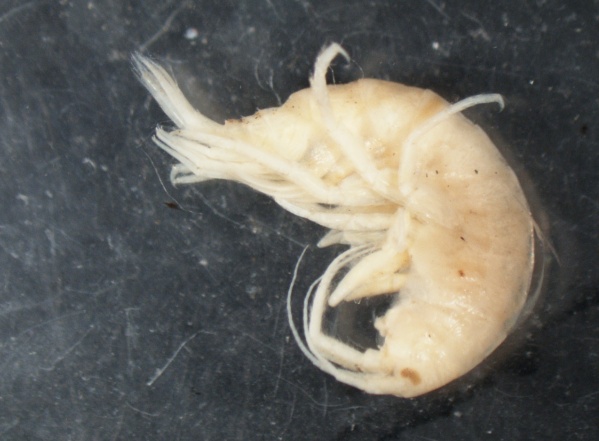 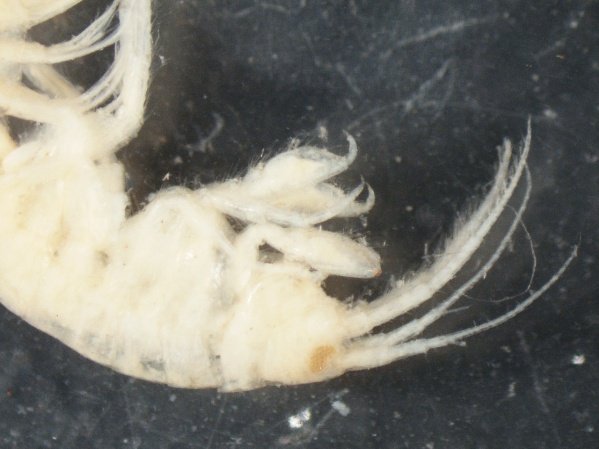 Many species of Gammarus and related genera (Chaetogammarus, Dikerogammarus, Echinogammarus, Obesogammarus, Pontogammarus) look alike macroscopically and identification to species level requires microscopic examination. Male G. tigrinus is characterized by having a dense "fur" of long, "curly" setae on antennae 2 and pereopods (Sexton, 1939; Grigorovich et al., 2005), though the curling may be absent during winter months. Uropod 3 is long and setose. The females are not as hairy. Males are only slightly bigger than females (♂ 12-14 mm, ♀ 10-12 mm). Body of living adult animals usually has characteristic dark transverse bands ("tiger-stripes"). Several native and introduced gammarid species occur in the same general area as G. tigrinus (see Ecology below). 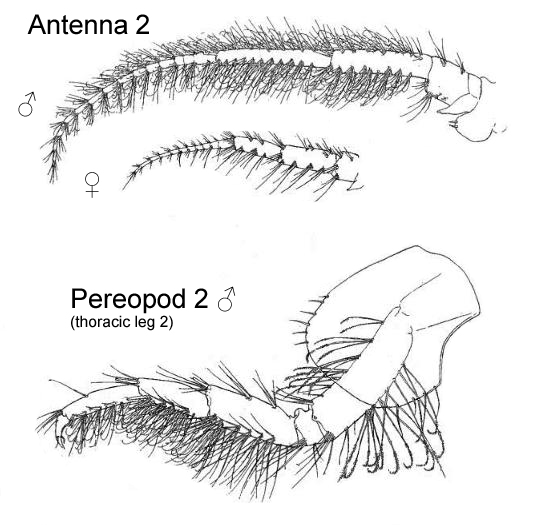 Gammarus tigrinus drawings of setae on antennae and legs of male. Drawing of female antenna for comparison (from Sexton 1939).

Invasive  distribution:Anecdotal information that it was  brought to Europe with naval vessels during World War I has often been repeated,  but so far never documented (Costello, 1993; Bailey et al., 2006). The first  documented European record is from the UK in 1931 when it was described as a new  species (Sexton, 1939; Pinkster et al., 1977). Molecular studies have shown that  the English and Northern Ireland populations come from different source  populations (Kelly et al., 2006b). It was introduced intentionally from England  to the heavily polluted German rivers Weser and Werra in 1957 because the native  gammarids had disappeared. It reproduced and spread to other inland waters in  Germany. In 1964 G. tigrinus was found abundantly in the Netherlands  where it caused nuisance to fisheries in the IJselmeer (Nijssen & Stock, 1966;  Pinkster et al., 1977). The first introduction into the Netherlands appears to  originate from a semi-intentional release in 1960 by a scientist, who had  imported specimens for laboratory experiments from Northern Ireland; because  they had not reproduced in the laboratory, he assumed that they would not be  able to reproduce in the wild either (Nijssen & Stock, 1966). Although ballast  water has also been suggested as a possible vector, the Northern Ireland origin  of the Dutch population has been confirmed by molecular studies (Pinkster et  al., 1992; Kelly et al., 2006b). Its spread in the Netherlands has been followed  over the years, and it appears that a second invasion from German rivers took  place around 1991 (Pinkster et al., 1992). In Belgium the first record is from  1995 near Antwerp (Kerckhof et al., 2007). It was first found in Brittany,  France in 2005, although it had been present in various rivers since 1991. It is  currently spreading at a slow rate at the Atlantic coast of France (Piscart et  al., 2008). In the Baltic Sea the earliest record is from the Schlei Fjord,  Germany in the westernmost most part where it was recorded in 1975 (Bulnheim,  1976). The next records are likewise from the German Baltic coast in 1994  (Zettler, 1995). In the same year it was also recorded from Polish waters, in  the Szczecin and Vistula Lagoons (Jaźdźewski & Konopacka, 2000), though  apparently it had been present in freshwaters since 1988 (Normant et al., 2007).  In 2003 it was found in the Gulf of Finland (Pienemäki et al., 2004) and Gulf of  Riga (Herkul & Kotta, 2007), and in 2004 in the Curonian Lagoon (Daunys &  Zettler, 2006). Its occurrence in the American Great Lakes, where it was first  found in 2001, is also considered an introduction by human interference  (Grigorovich et al., 2005; Kelly et al., 2006b), possibly from Europe (Kipp,  2007). It has not yet been observed in Swedish (Främmande arter, 2006), Danish  or Norwegian waters.

Gammarus tigrinus is highly euryhaline. In its native area it lives in brackish water of salinities from 4 to 20 ppt (Kelly et al., 2006b). In its introduced area it lives in freshwater in many rivers, though ionic content may be elevated due to pollution (Koop & Grieshaber, 2000; Grabowski et al., 2007), and up to 7 ppt in the southern Baltic Sea (Normant et al., 2007). Upper temperature tolerance is 32-34° C (Kipp, 2007). It is also relatively tolerant to low oxygen concentrations, high alkalinity and eutrophication (Chambers, 1977; Koop & Grieshaber, 2000; Kipp, 2007). Population densities may be extremely high, more than 20,000 individuals per m² (Chambers, 1977). G. tigrinus may act as a herbivore (Normant et al., 2007; Orav-Kotta et al., 2009), although predatory behavior, especially in connection with interspecific aggression, has also been observed (MacNeil & Prenter, 2000).

Reproduction:Breeding has been studied in detail by Chambers (1977). Sexual maturity is reached at a small size, egg-bearing females of only slightly more than 4 mm have been observed. This size is reached in 40 days at 10° C, 32 days at 15° C and 27 days at 20° C (Pinkster, 1975). The number of eggs in a brood depends on the size of the female. The maximum number of eggs recorded in a brood is 95, and the mean brood size is about 20 (Grabowski et al., 2007). Males grasp females in a characteristic pre-copula pose, and hold on until spawning takes place. Overwintering animals may copulate in winter, and egg-bearing females have been found in early spring at a water temperature of 2° C, although it has been claimed that Gammarus tigrinus cannot reproduce below a temperature of 5° C (Pinkster et al., 1992). Brooding time is 20 days at 10° C (Pinkster, 1975), 16 days at 13° C and 9 days at 21° C, and there are three spawning peaks (July, August, October) per year. Life span has been calculated to be about 2 months depending on temperature; overwintering animals live for several months. Presumably one female can have several consecutive broods per season. Native species grow and mature more slowly and carry fewer eggs (Pinkster, 1975; Chambers, 1977), but other non-indigenous species also have high fecundity and short generation times (Grabowski et al., 2007).

Gammarus tigrinus is able to outcompete many native gammarids in oligohaline waters. In Vistula Lagoon in the southern Baltic Sea, the native gammarids G. duebeni and G. zaddachi have been replaced by non-native species, predominantly G. tigrinus (Grabowski et al., 2006; Surowiec & Dobrzycka-Krahel, 2008). In any case the original amphipod fauna has been drastically changed in several places in northern Europe (Pinkster et al., 1992; Jazdzewski et al., 2004; Zettler, 2008). Life-history traits, such as early maturation, large brood size, short generation time have been identified as possible reasons for the competitive superiority of G. tigrinus (Pinkster et al., 1977; Costello, 1993), though multivariate analyses showed that tolerance to changing salinity and pollution were better indicators for separating invasive and native species (Devin & Beisel, 2007; Grabowski et al., 2007). Parasitism, both in native and invasive species, may also be involved in determining competitive success (MacNeil et al., 2003a,b), whereas differences in microhabitat preference and diel activity patterns have been demonstrated in cases of coexistence (MacNeil & Prenter, 2000; van Riel et al., 2007). G. tigrinus is intermediate host for the eel parasite Paratenuisentis ambiguus (Van Cleave, 1921), in Germany, but as only laboratory reared amphipods were introduced from England to Germany, it is unlikely that the acanthocephalan parasite was brought to Germany with the amphipod (Taraschewski et al., 1987). The parasite has recently been found in eels in Polish coastal waters (Morozińska-Gogol, 2008), and may also occur in other localities within the introduced range of G. tigrinus. When occurring in high densities, G. tigrinus has had damaging effects on fishing gear and trapped fish (Pinkster et al., 1977).

Several other non-indigenous species of gammarid amphipods occur in freshwaters of northern Europe. Some of these species are tolerant of low salinities, and have been found in oligohaline waters of the Baltic Sea. However, these will not be dealt with specifically in this project. Below a list is given with links to further information.