Several similar species occur in the area: Acartia clausi Giesbrecht, 1889, A. longiremis (Liljeborg, 1853) and A. bifilosa (Giesbrecht, 1881). The latter species prefers low salinity waters (David et al., 2007), like A. tonsa, whereas A. clausi prefers high salinities (Calliari et al., 2006). A. longremis has a northern boreal-arctic distribution (Lee & McAlice, 1979), whereas A. clausi is widespread in warmer waters including the Mediterranean and Black Sea (Gubanova, 2000). Acartia tonsa is usually about 1 mm long (up to 1.5 mm) (Garmew et al., 1994; Belmonte et al., 1994; Marcus & Wilcox, 2007) and hence a microscope is required for identification. It has a relatively short abdomen, and relative body width is higher than in sympatric congeners. Females are only slightly larger than males, whereas in A. clausi females are significantly larger than males. Females of A. tonsa can be distinguished from female A. bifilosa by the shape of the exopod of the 5th pair of legs, which in A. tonsa is elongate with several spinules about half way to the tip, whereas A. bifilosa has a swollen base and fine spinules along the distal half (Redeke, 1934). However, it is very difficult to distinguish the species of Acartia, and so far no molecular method has been developed. 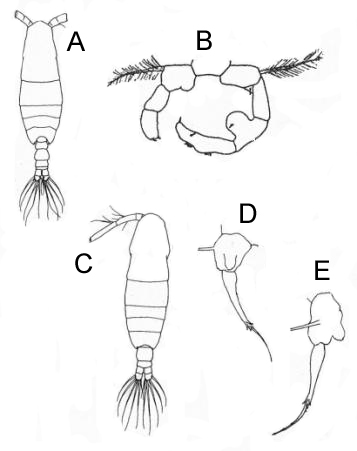 Native area: This is a cryptogenic species with an almost worldwide distribution in coastal subtropical and temperate waters. The questionalble identity of the species listed as synonyms is an indication of this. However, it has also been claimed to be a glacial relict in northeastern North America (McAlice, 1981). The type locality, i.e., the place where the material for the original description was collected, is Port Jackson in New South Wales, Australia (Redeke, 1934), but this does not mean that Australia is its native area. On the contrary, finding it in a port area indicates human mediated introduction.

Introduced area: Acartia tonsa was first collected in 1916 in the Zuiderzee, at that time a huge brackish water area in the Netherlands. Unfortunately it was not correctly identified, but later examination of samples identified its presence, and it was also determined that it was certainly not present at that locality in 1912 or earlier (Redeke, 1934). The first Danish record is from Ringkøbing Fjord in 1921, and studying plankton samples from previous years showed that it had not been present prior to 1919 (Jespersen, 1933). Presently it is one of the commonest copepods in coastal waters throughout Denmark (Sørensen et al., 2007; Tiselius et al., 2008). In the Baltic it was first recorded in 1924 in the Gulf of Riga. In 1925 it was found in the Gulf of Gdansk, Poland, in the Gulf of Finland in 1934 and in 1939 it had reached the waters around Helsinki (Segerstråle, 1957). It was first recorded in France in 1925, and this was actually the first published record in Europe. More recently, i.e. 1990s to the present, it has become abundant in several estuaries in the Bay of Biscay (David et al., 2007; Aravena et al., 2009) and also in Portugal (Leandro et al., 2006). In Germany it was first found in the estuary of the Weser in 1930 (Redeke, 1934), whereas it apparently did not occur on the Baltic coast till about 1981 (Gollasch & Nehring, 2006). In Sweden the first record is from 1934. Presently it occurs on the Swedish westcoast as well as part of the Baltic coast. It is unknown whether it lives in the Gulf of Bothnia (Främmande Arter, 2006).

Acartia tonsa was first found on the east coast of North America around 1900, where it was found in brackish water. Presently its distribution extends from New Brunswick, Canada to Argentina in the south. On the Pacific coast it was found in San Francisco Bay in 1924 and further south at La Jolla and San Diego before 1905, and also along the Pacific coast of Chile (Redeke, 1934) and Peru (Garmew et al., 1994). Molecular studies have indicated that the species identified as A. tonsa on the Pacific coast of North America is a separate species (Caudill & Bucklin, 2004). Also, the high variability both within and between populations on the east coast of the USA is interpreted as indicating that A. tonsa has not been introduced by human activities (Caudill & Bucklin, 2004), and the absence of hybrids may indicate that cryptic species are involved (Chen & Hare, 2008).

Acartia tonsa has more recently been found in the Mediterranean, the Black Sea and the Caspian Sea. In the Caspian Sea it was first found in the central part in 1982, and in the northern part in 1983, but it has been suspected that it has been present before, misidentified as A. clausi. A. tonsa was first recorded from the Black Sea in 1990 (Belmonte et al., 1994), but examination of older plankton samples showed that it was present in 1976 but not in 1968. It was not reported from the Mediterranenan until 1985, which indicates that it was introduced to the Black Sea with ballast water (Gubanova, 2000). This is further supported by the fact that population density of A. tonsa is 25 times lower in the Marmara than in the Black Sea (Hubareva et al., 2008). It seems to be still spreading in the Mediterranean (Sei & Ferrari, 2006).

Vector: Ballast water seems to be the most likely means of transferring this species (Gubanova, 2000), or its eggs between coastal waters of different continents. The fact that A. tonsa can produce highly resistant diapause eggs as well as eggs that can be induced into quiescence has probably played an important role for its wide distribution. However, it cannot be ruled out that its presence in the western North Atlantic is natural (McAlice, 1981).

Acartia tonsa is a coastal and estuarine species. It is erythermic, euryhaline, eurytrophic, etc., and thus well adapted for low salinity and highly eutrophic waters. It has been used extensively for experimental studies on eutrophication, competition, etc., in many regions (e.g. Tiselius et al., 1995, 2008) and also it has been used as food for suspension-feeding organisms in laboratory experiments and for fish larvae in aquaculture (Holmstrup et al., 2006) as well as for toxicity-tests (Nielsen et al., 1990; Kusk & Petersen, 1997; Bielmyer et al., 2006). Also, its physiology and reproduction have been studied in the laboratory (e.g., Gonzales, 1974; Kiørboe et al., 1985; Thor, 2003). Acartia tonsa is often a dominating species in coastal and estuarine plankton samples (Cervetto et al., 1995; Cubbage et al., 1999; Leandro et al., 2006; Sørensen et al., 2007; Tiselius et al., 2008). Acartia tonsa feeds on nauplii of other copepods (Tackx & Polk, 1982) and on phytoplankton, including diatoms as well as flagellates. Cyanobacteria, however, are not eaten in measurable amounts (Schmidt & Jónasdóttir, 1997). It can switch between two different feeding methods, suspension feeding on non-motile prey, and actively capturing motile prey. When phytoplankton concentration is high, suspension feeding dominates (Kiørboe et al., 1996), but they strongly prefer motile prey such as ciliates and flagellates to non-motile prey such as diatoms (Sommer, 2009). The lower size limit for captured and ingested particles is about 2-4 µm (Berggreen et al., 1988).

In the northern parts of its range A. tonsa has one population peak in the fall (August-September), but in southern parts there is also a spring peak in May (David et al., 2007). In the northern Baltic it only occurs in the plankton in late summer and fall, and spends the rest of the year as "resting eggs", which are intermediate between diapause eggs and regular eggs (Katajisto, 2006).

Reproduction: Males pack their sperm into spermatophores that are attached to the females precisely at the genital opening (Hammer, 1978). Mates are detected by hydromechanical signals rather than pheromones (Kiørboe & Bagøien, 2005). Development time varies from 40 days at 10º C to 9 days at 22º C (Leandro et al., 2006). Optimal temperature for hatching in a Baltic population was 22-23° C, and optimal salinity was 25 ppt (Holste & Peck, 2006). Development time also depends on food availability (Berggreen et al., 1988). Egg production of individual females goes on for about 3-4 weeks (Rodriguez-Graña et al., 2010), and each female produces 20-30 eggs per day (Sørensen et al., 2007), 18-50 per brood every 5 days (Marcus & Wilcox, 2007), or 37-53 eggs per day (Rodriguez-Graña et al., 2010). Eggs have a diameter of about 70-75 µm and are covered with short spines (Belmonte, 1998). They are slightly heavier than seawater (Marcus & Wilcox, 2007), which means that they sink towards the bottom after spawning. A. tonsa goes through 6 nauplius stages and 5 copepodite stages before they reach the sexually mature stage (Berggreen et al., 1988). At 25° C hatching of the first nauplius takes about 48 hours after spawning (Marcus & Wilcox, 2007). In its northern range, i.e., north of New Jersey, USA, A. tonsa produces benthic diapause eggs, which survive the winter and hatch in the spring when temperature reaches 10º C (McAlice, 1981; Caudill & Bucklin, 2004), but further south reproduction may take place all year round (Hammer, 1978). Reproduction remains low between 10 and 16° C (McAlice, 1981). Populations in the Limfjord, Denmark did not produce diapause eggs even if winter temperature is much lower than 10° C (Sørensen et al., 2007). However, the "normal" eggs may enter a quiescence state under adverse conditions (Højgaard et al., 2008). In the Gulf of Maine A. tonsa produces three generations per season between May and December (Lee & McAlice, 1979).

Competition with other copepods, especially congenerics appears to be the only documented impact of A. tonsa. In the Black Sea it has replaced the native, stenothermic A. latisetosa (Kritchagin, 1873) during the 1970s (Gubanova, 2000). In southwestern France it is seasonally replacing A. bifilosa in low salinity waters (David et al., 2007). This was atributed to intrusion of saline water plus increased water temperature in connection with a nuclear power plant, and furthermore, the change in zooplankton composition was suspected to impact production of shrimp and fish production. In a Spanish estuary with relatively high salinity, A. tonsa had a negative impact on A. clausi (Aravena et al., 2009). Grazing impact of A. tonsa appears minor; in a Mediterranean lagoon it consumed less than 1% of the phytoplankton production (Cervetta et al., 1995). A positive impact is that A. tonsa has been used to produce live feed for aquaculture organisms (Marcus & Wilcox 2007; Sørensen et al., 2007).