This species is small, about 5 mm long, with 8 thin, retractable tentacles and 3 pairs of greenish banded gills in the front end. There is a broad "upper lip" below the tentacles (Thorson, 1946). The round prostomium bears two eye-spots, and the first 3 segments do not have any setae. The body is divided in two regions, the anterior one relatively thick and consisting of 16 segments with setae on separate noto- and neuropodia, the posterior one narrow and consisting of 13-19 segments with undivided parapodia bearing only the short hook-like setae (uncini). The posteriormost segment (pygidium) does not have any appendages. It belongs to the family Ampharetidae. It lives in reddish brown mud-tubes buried in the sediment with only the tip protruding. The body color is white to pale brown; in the original description 4 darker bands on the anterior ventral side (Horst, 1919), which are not found in specimens from Denmark (Wesenberg-Lund, 1934). Due to its small size, a microscope is needed for correct identification. 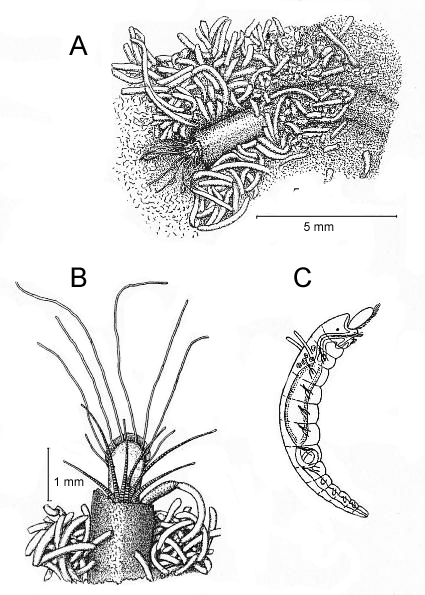 Drawing of Alkmaria romijni (from Thorson, 1946)
A: Adult in tube surrounded by fecal pellets
B: Anterior end of adult with extended tentacles - and in the act of defecating
C: Juvenile from tube of adult; length approx. 0.5mm

Native distribution: Unknown. It was first collected in Alkmaarder meer in the Netherlands and described in 1919 (Wesenberg-Lund, 1934). It is not considered alien in Belgium, France or Germany (Kerckhoff et al., 2007; Goulletquer et al., 2002; Gollasch & Nehring, 2006). Nor was it included in the Danish list (Jensen & Knudsen, 2005). In the UK it is even protected (see below). It may be a southern species that has been spreading northwards since the 1920s, but until further information becomes available it will be considered cryptogenic.

Introduced distribution: This is a cryptogenic species. Due to its small size and specialized habitat it was only discovered in the 20th century and to this day its distribution appears to be scattered along the coasts of Europe. The type locality no longer exists, and it is apparently extinct in the Netherlands (Wolff, 2000). However, it seems to be very abundant in habitats that are suitable, e.g. Ringkøbing Fjord, where it was first collected in 1929 (Wesenberg-Lund, 1934). In Denmark it also occurs in Nissum Fjord (Laursen et al., 2004) and Roskilde Fjord (Rasmussen, 1989). There are also some older records from Slien Fjord in the westernmost part of the German Baltic coast (Thorson, 1946). It occurs several places in the Baltic Sea, e.g., the Vistula Lagoon, where it appeared during the 1950s (Ezhova et al., 2005). It was listed as Critical on the Red List for the Wadden Sea in 1996 (Petersen et al., 1996). In the U.K. it was considered a rare species and protected under the Wildlife and Countryside Act 1981. It only occurs in one locality in Norway (Brattegard & Holthe, 1997), and is listed as Vulnerable due to small population and/or small area (criterion D2 of the IUCN) in the Norwegian Redlist (http://www.artsportalen.artsdatabanken.no/#/Rodliste2010/Vurderinger/Alkmaria%2Bromijni/51210). It has been found on one locality on the Baltic coast of Sweden (Forsman, 1972). It occurs in the German part of the Wadden Sea, but was considered Susceptible according to the old IUCN criteria (Petersen et al., 1996). It has also been found in several localities on the south coast of the Baltic Sea (Ezhova et al., 2005). It seems to be fairly common (more than 1000 individuals per m²) in some estuaries on the coast of Portugal, and has been suggested as an indicator for disturbance (Cardoso et al., 2004, 2007; Conde et al., 2010). It has also been recorded from the Atlantic coast of Morocco (Kirkegaard, 1996)

Vector: It is a cryptogenic species, so no vector can be pointed out.

It is a true brackish water species, usually not occurring at salinities above 18 ppt, though it can tolerate higher salinities for short time periods. It is a surface deposit feeder (Nunes et al., 2008), using the thin, sticky tentacles to collect food particles. It occurs in muddy sediment in sheltered lagoons and estuaries (Wesenberg-Lund, 1934; Ditlevsen, 1936), and because it is not really confined to lagoons, it has been reclassified, but still protected (Gilliland & Sanderson, 2000). In Ringkøbing Fjord it has been found in densities of more than 600 individuals per m², and in Nissum Fjord density was just over 100 individuals per m² (Laursen et al., 2004). It has been found at depths between one and 5 m (Thorson, 1946). In Portugal it has been shown to increase in abundance with increasing eutrophication and disappearance of seagrass beds (Pardal et al., 2004).

The tubes are 20-30 mm long and sticky so that fecal pellets stick to the outside of the tubes (Thorson, 1946).

Reproduction: Alkmaria romijni is viviparous. Embryos develop inside the female, and further development takes place inside the tube. Spawning season in Ringkøbing Fjord is August to September (Wesenberg-Lund, 1934). Thorson (1946) assumed that this species was protandric hermaphrodite because during the spawning season (June – July) 80-90% of the animals contained ripe eggs and only the smallest individuals contained sperm. They produce 5-95 eggs and usually 20-30 young can be found inside the tube of the female. The young do not look like planktonic polychaete larve but are similar to the adult worms.

It is a rare species except in the special habitats where it may be very abundant, but because it is so dependant on habitats, it has probably been overlooked for many years. This has led to its being protected in the U.K. There are local action plans for the species (see e.g. Pembrokeshire) and to protect the habitats in which it (and several other estuarine and/or lagoonal species) occurs (see e.g. Isle of Wight Biodiversity Action Plan or the Biodiversity action plan for Hampshire.)

The construction of a motorway in the U.K. was temporarily halted because it went through one of the few habitats where Alkmaria romijni was known to occur. It has since been found in several other habitats, so this is unlikely to occur again.

The fact that it does not have a planktonic larval stage, is very small and has specific habitat requirements makes it unlikely that it has been able to disperse by its own means and hence it is presently considered cryptogenic. However, its global distribution seems to be restricted to the coasts of western Europe, the U.K. and northwestern Africa, so it cannot be ruled out that it is just expanding its range northwards, though it is unknown by what means.