The shells of Mya arenaria are easy to identify. The shell is ovate and gaping at both ends, i.e. the two valves cannot close completely. Maximum length is said to be 17cm, but in most cases shell length does not exceed 10cm. All species of Mya have a large calcareous plate (chondrophore) on the hinge of the left valve. The shape of the chondrophore differs among species (see Figure). The pallial sinus is large (indicating long siphons). The native species Mya truncata Linnaeus, 1758,has a truncate posterior end of the shell and the posterior gape between valves is larger, corresponding to the larger size of the siphons. The Arctic species, sometimes called M. pseudoarenaria Schlesch, 1931, sometimes M. neoovata Petersen, 1999 (see below), though the shell is ovate, is more closely related to M. truncata than to M. arenaria. Large M. arenaria can also be confused with beach-worn specimens of the otter-clam (Lutraria), but this species does not have the chondrophore. Fresh specimens of Lutraria also have a pigmented (greyish brown) periostracum covering the outside of the shell. 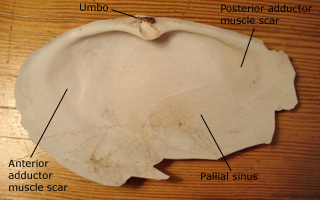 Native distribution: The present "native" distribution of Mya arenaria is not quite clear. It is the east coast of North America, but there is uncertainty about the northern as well as the southern limit. Most publications give a range from Labrador to North Carolina (Morgan et al., 1978), but others claim a northern distribution from Alaska and across northern Canada. The southern limit is sometimes given as Virginia and Chesapeake Bay because only dead valves were known from North Carolina (Laursen, 1966). However, Rasmussen & Heard (1995) found a living population as far south as Georgia. Some authors also claim that the occurrence of M. arenaria in Japan is part of its native distribution (Bernard, 1979).

Prehistoric distribution: In the past M. arenaria has had a much wider distribution. It is supposed to have evolved in middle Miocene (about 12 million years before present) in Japan from where it spread to the NE Pacific during late Miocene (about 5 million years before present) (Bernard, 1979; Strasser, 1999). Bernard (1979) claims that it also reached the NW Atlantic in late Miocene, though the Bering Strait did not open till the Pliocene (Vermeij, 1989; Strasser, 1999). It could have reached the NW Atlantic through the then open Isthmus of Panama (Strasser, 1999). It reached the NE Atlantic in late Pliocene (Hessland, 1946; Strasser, 1999). It died out in the NE Pacific in late Pleistocene (about 10,000 years before present), except possible in Alaska. Its extinction in the NE Atlantic may be during the Pleistocene (Lasota et al. 2004), possibly late in this period, but certainly before historical times (Vermeij, 1989), although van Benthem Jutting (1942) claims the presence of M. arenaria in several Holocene periods in the Netherlands.

Invasion history: Mya arenaria is the oldest species documented to be introduced to European waters. It neither occurs in Stone Age kitchen middens nor in marine deposits from that period (Hessland, 1946; Petersen et al., 2005). Nor has it been found in Roman or post-Roman middens (Bernard, 1979). For many years it was assumed that it had been re-introduced by French explorers after 1542 (Petersen et al., 1992), the oldest confirmed specimens being found in Belgium in 1583 (Bernard, 1979). However, Petersen et al. (1992) dated shells found at Skagen in northern Denmark to 1245-1295, clearly predating Columbus (1492). Presently M. arenaria occurs along the coast of Norway (Brattegard & Holthe, 2001), possibly extending along the Kola Peninsula and into the White Sea (Maximovich & Guerassimova, 2003) and most of the European coastline, including the U.K. and Ireland. The southernmost record is from Portugal (Strasser, 1999). It also extends through the Danish straits to the Baltic Sea (Kube, 1996; Behrends et al., 2005; Obolewski & Piesik, 2005).

More recently M. arenaria has been introduced to the Black Sea around 1966 (Gomoiu et al., 2002) and a few records exist from the Mediterranean, the earliest of which is from 1976 (Zenetos et al. 2003). Also, its appearance in Iceland appears to be very recent, the first record being from 1958 (Olafsson and Thorarinsdottir, 2004).

On the west coast of North America the introduction of M. arenaria has been better documented. It was first introduced to San Fransisco Bay between 1869 and 1874 with oysters from the east coast (Bernard, 1979; Palacios et al., 2000). Its spread north and south can be followed in notes and specimens from shell collectors, reaching Alaska around 1940. It does not appear to live north of the Bering Strait.

There is a taxonomic problem that affects the hypothesis of invasion history. In some databases, e.g. CLEMAM and Marine Species Identification Portal, Mya pseudoarenaria Schlesch, 1931 is listed as a junior synonym of Mya arenaria. However, M. pseudoarenaria was described as a new species encompassing forms previously described as Mya truncata forma ovata Jensen, 1900 (Laursen, 1966; Bernard, 1979; Petersen, 1999). These authors stress that all Arctic records of Mya arenaria are not that species, but a species, which Petersen (1999) named M. neoovata because M. pseudoarenaria was based on fossil material; other authors still use M. pseudoarenaria for this species. Whether the fossil and recent species are identical has not yet been resolved, but at least M. arenaria does not occur in Arctic waters. British records of M. pseudoarenaria (see British Towns and Villages Network or Sea Life Base) most likely refer to fossil or subfossil material.

Mya arenaria is a slow burrower compared to other bivalves. It uses a different mechanism, namely ejecting water through the small pedal gap in the anterior end of the otherwise fused mantle edges (Checa & Cadée, 1997). The foot is relatively small and only serves as an "anchor" during burrowing. Clams with shell length over 5cm may sit more than 15cm deep in the sediment (Zwarts & Wanink, 1989).

Mya arenaria is tolerant of low salinity and quite large changes in salinity and temperature. Hence it is common in estuaries in its native as well as its introduced range. In the Baltic Sea it lives at salinities of about 6 ppt (Englund & Heino, 1994).

Population dynamics of M. arenaria both in its native and introduced areas seem to include large variations in larval settlement and juvenile mortality (up to 90% mortality during first year). Often the population is dominated by one or two widely separated cohorts (Ayers, 1956; Möller & Rosenberg, 1983; Jones et al., 1989; André & Rosenberg, 1991; Kube, 1996; Strasser et al., 1999, 2003). This has been attributed to low recruitment after mild winters where predation pressure on newly settled clams is high, and high recruitment after cold winters where predation pressure is lower (Beukema, 1982). Low genetic variability has been determined both in the native and introduced areas, using allozyme electrophoresis and mitochondrial COI gene (Morgan et al., 1978; Lasota et al., 2004; Strasser & Barber, 2009), indicating rapid population expansion and high gene flow on both sides of the Atlantic.

Reproduction: In most north European waters there is only one spawning period during early summer months (Möller & Rosenberg, 1983; Günther, 1992), but some places there are indications of two separate spawning events, one in spring and one in late summer (Winther & Gray, 1985; Pfitzemeyer, 1963). Fertilization is external and larvae are pelagic and planktotrophic for 2-3 weeks. Fecundity is high, 100,000 to 5 million per female per season, and varies with size and age of the female. Sexual maturity usually set in at a size of 20-50 mm (Strasser, 1999).

Predators Crabs (e.g. Carcinus maenas and Callinectes sapidus) and flat-fish (flounder and plaice) are the main predators on M. arenaria. Brown shrimp, Crangon crangon and gobies (Pomatoschistus microps) may also feed on small M. arenaria (Möller & Rosenberg, 1983; Günther, 1992). Large clams burrow so deep that only a few wading birds, such as curlew, have beaks long enough to catch them (Zwarts & Wanink, 1989). However, tips of siphons may still be nibbled off by surface feeding predators.

As M. arenaria has been present in Nordic seas for more than 500 years, it must be considered completely naturalized, and it is therefore difficult to identify its impacts. However, when it invades a new area, it still shows its invasive properties. In Ringkøbing Fjord on the Danish west coast a change in sluice gate practice changed the summer salinity from about 9 ppt to about 12 ppt, and M. arenaria subsequently invaded the fjord and caused a regime shift (Petersen et al., 2008). Something similar may have happened in the Limfjord although monitoring at that time was not as well established. Here Mya truncata was the most common Mya species until the disappearance of the eelgrass during the 1930s. Mya arenaria only occurred in a few brackish estuaries opening into the Limfjord. However, in the late 1970s and especially during the 1980s and 1990s, M. arenaria was suddenly very abundant in most of the western part of the Limfjord (Christiansen et al., 2006). Increase in density has also been observed in the Baltic. This has been associated with increase in organic material (Kube, 1996). In the Baltic there seems to be some interspecific interactions causing Macoma balthica to decrease in biomass in places where M. arenaria is abundant (Obolewski & Piesik, 2005).

Mya arenaria has a high capacity for filtration. Volumes of about one to ten litres per hour have been measured for clams of 6-7cm shell length (Jørgensen & Riisgård, 1988), and population filtration rates of more than 8 m3 m-2 day-1 have been calculated in the southern Baltic Sea (Foster & Zettler, 2004). In Ringkøbing Fjord the invasion of M. arenaria caused a decrease in chlorophyll a to 17% of previous concentrations (Petersen et al., 2008).

Mya arenaria seems to often die in situ, forming so-called death assemblages (Strasser, 1999), which can persist for maybe 100 years or more and form habitats for other species (Palacios et al., 2000).

In its native area M. arenaria is a highly valued food item. Commercial fisheries take place in the USA (Congleton et al., 2006) and Canada. Commercial fishery on the west coast of North America stopped by 1948, possibly due to overfishing and pollution, possibly because the market disappeared after culture of Ruditapes philippinarum, another introduced species, increased (Cohen, 2005). Fishing is done by hydraulic dredges or by a special hand-tool, the "clam-hack" (Emerson et al., 1990). Both methods may affect clam populations because exposed clams may not be able to re-burrow to their original depth, thereby exposing themselves to increased predation (Emerson et al., 1990). In northern Europe there is no targeted fishery for M. arenaria, but fishery for cockles (Cerastoderma edule) in the Wadden Sea may affect M. arenaria in a similar manner (Piersma et al., 2001).