You have a Ruditapes philippinarum (Adams & Reeve, 1850) – Manila clam

There are several native species of carpet shells in the NE Atlantic, and R. philippinarum is very similar to these. The various species are distinguished on coloration, ornamentation and size and shape of the pallial sinus. Also the shape and size of the siphons differ among species. Genera of the subfamily Tapetinae are separated by the shape of the hinge (Fischer-Piette & Métivier, 1971). However, tooth shape and size are not always unequivocal, and most species have moved repeatedly from one genus to another. Unfortunately recent molecular studies have not been able to resolve these problems (Mikkelsen et al., 2006). The two most widespread native species are Ruditapes decussatus (Linnaeus, 1758) and Venerupis senegalensis (Gmelin, 1791) (=V. pullastre (Montagu, 1803)). R. decussatus occurs in Norway (to Lofoten) (Brattegard & Holthe, 2001) and V. senegalensis in Norway (to Troms county) (Brattegard & Holthe, 2001), Sweden and Denmark (Kattegat, Limfjord, Isefjord) (Rasmussen, 1958). Two other species also occur in Norway, Venerupis(?/Paphia?) aurea (Gmelin, 1791) (to Trøndelag county) and V.(?/Paphia?) rhomboides (Pennant, 1777) (=V. edulis) (to Troms county) (Brattegard & Holthe, 2001). V. rhomboides has also been found one time in Danish waters (Jensen & Knudsen, 1995). 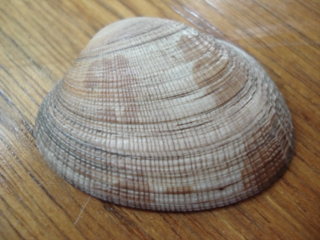 For further information on Ruditapes philippinarum and other species of carpet clams see e.g.:

Pallial sinus not quite half as long as shell, not confluent with pallial line. Radial sculpture more distinct than concentric. Siphons are long (may reach slightly more than shell length) and fused at the basal half of their length (Lam, 1980).

Pallial sinus of intermediate length (not quite half the shell length). Only concentric sculpture.

This is the species most similar to R. philippinarum. It has a short pallial sinus, which is not confluent with the pallial line. Also, it has distinct radiating sculpture as well as concentric on the external shell surface.

This species has a long pallial sinus, which is partially confluent with the pallial line. The external shell surface has concentric sculpture and very fine radiating lines.

Introduced distribution: Ruditapes philippinarum presently occurs on the Pacific coast of the USA where it was accidentally introduced with oyster spat in the 1930s. Its invasion history in European waters is very well documented. In Brittany, France, broodstock was imported from Seattle, Washington in the 1970s (Beninger & Lucas, 1984). The first hatcheries were set up in 1974 (Goulletquer et al., 1999). Wild populations have been established since 1988 (Flye-Sainte-Marie et al., 2007). It was first introduced to the UK in 1980 (Laing & Child, 1996) as broodstock from Oregon, USA (Goulletquer, 1997). Culture was initiated in Poole Harbour in 1988 (Humphries et al., 2007). It was assumed that the species was not able to reproduce and spread in the wild. However, in 1994 a wild, reproducing population had been established and a targeted though regulated fishery is now in operation (Jensen et al., 2004). Population density remains low (max. 60 ind/m2) (Humphreys et al., 2007). It was first introduced for culture in the Venice Lagoon, Italy in 1983. The seed came from hatcheries in the UK (Breber, 2002). In Norway broodstock was imported to hatcheries in 1987. The seed produced was exported to Spain and Ireland. In 1989 two permits were given to culture R. philippinarum in Norway, and also some illegal operations were set up. Although the culture is no longer in operation, a small wild population exists at three of the former culture sites (Mortensen & Strand, 2000).

Fishery Targeted fishery on wild populations along the French Atlantic coast has taken place since the 1990s (Flye-Sainte-Marie et al., 2007).

Reproduction: In R. philippinarum different stages of oocyte maturation can be found within a single female, and also resorption of gonadal tissue occurs. This is not seen in the native R. decussatus and probably gives R. philippinarum a reproductive advantage (Delgado & Pérez-Camacho, 2007).

Juvenile clams are easily resuspended, though they attach by byssus threads. Thus they can disperse away from an unsuitable substrate (de Montaudouin, 1997).

Most of the impacts recorded for R. philippinarum are related to "harvesting"/ targeted fishery of this species (Spencer et al., 1997). However, in places where fishery has been discontinued, R. philippinarum ended up comprising 98% of the macrofauna (abundance) (Toupoint et al., 2008).