You have a Mercenaria mercenaria (Linnaeus, 1758) – Hardshell clam

Mercenaria mercenaria is characterized by thick shells, externally light brown to gray with distinct concentric growth lines, internally white with purple markings at muscle scars and sometimes along edges. It can grow to a large size, up to 12 cm in shell length (Carter, 2008) and live for more than 40 years. 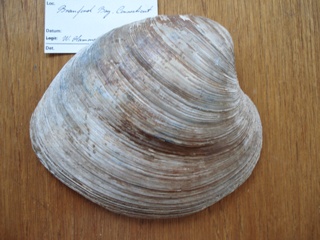 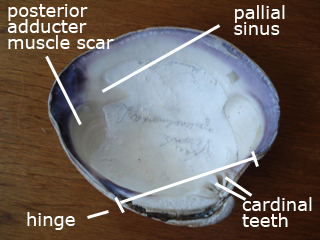 Native distribution: East coast of North America from the Gulf of St. Lawrence to Florida.

Introduced distribution:  Mercenaria mercenaria was first introduced to the Atlantic coast of France in 1861 (Goulletquer et al., 2002) and is presently established in the wild in Brittany. It has also been introduced for aquaculture several times in the UK. The first successful introduction was in 1925 (Carter, 2008). Wild populations were first recorded around 1960 (Heppell, 1961). Presently it has a restricted distribution (Carter, 2008). It has been found on several occasions in the Netherlands and Belgium, probably accidentally introduced with oysters from France (Wolff, 2005), but apparently it is not reproducing in the wild. It has also been introduced to the west coast of the USA, the Mediterranean and China.

Vector: Although introduction for aquaculture has been made on several occasions, accidental introduction associated with oysters or from the kitchens of vessels is considered more likely as the vector in the UK (Ansell, 1963). Secondary dispersal from populations in France has also been suggested (Heppell, 1961).

Mercenaria mercenaria is often found associated with oyster reefs or seagrass beds. It is relatively euryhaline, tolerating from 4 to 35ppt, though growth is fastest between 24 and 28ppt. It tolerates temperatures ranging from -2° C to 35° C. Growth is reduced at temperatures below 10° C and ceases below 5° C. It lives in muddy sediment in shallow water

Reproduction: The first wild-caught Mercenaria mercenaria in the UK spawned at about 18° C, though in its native area the minimum temperature for spawning was said to be 23° C (Ansell, 1963). In the laboratory larval development took about 2 weeks at 20° C. Sexual maturity usually reached at a shell length of 35mm.

In its native area there is an important fishery for Mercenaria mercenaria (Peterson, 2002). Smaller specimens have higher value than large ones, which negatively influences reproduction and recruitment. In Europe no effects on ecosystems or native species have been recorded. Effects of fishery are the same as for other clams dredged with mechanical or hydraulic clam dredges.