You have a Elminius modestus Darwin, 1854 – Australasian barnacle

Elminius modestus has only 4 calcareous plates surrounding the body. These plates are usually folded to give a scalloped appearance of the base. The base is not calcified; only a membraneous surface separates the body from the substrate. It is a small species, usually only about 5-6 mm in diameter. The only native shallow water species with folded shell plates in Nordic waters is Semibalanus balanoides (Linnaeus, 1767). However, this species has 6 shell plates, as most species of barnacles. Other species of Elminius have been introduced to other parts of the world, e.g., E. kingii J.E. Gray, 1831, from South America to eastern Canada (Gollasch, 2002) 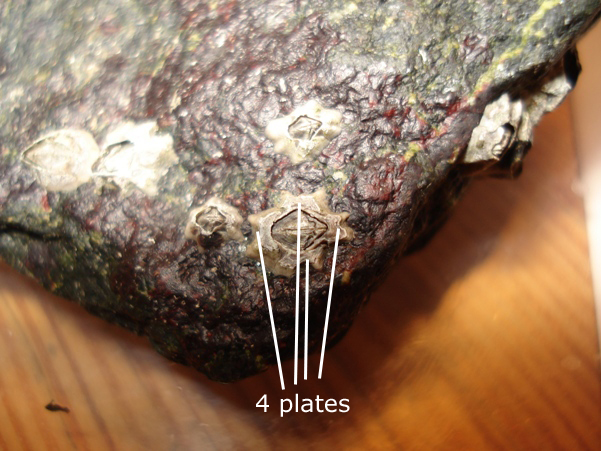 Pictures of Elminius modestus with the 4 plates 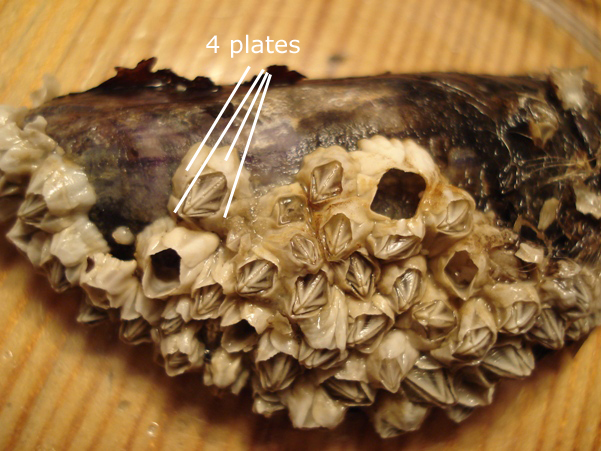 Pictures of Elminius modestus with the 4 plates

Taxonomic note: The genus name has recently been changed from Elminius to Austrominius, originally proposed only as a sub-genus (Buckeridge & Newman, 2010). However, this has not yet entered the literature, and the database used in this project, World Register of Marine Species (WoRMS; see http://www.marinespecies.org/ ) still uses Elminius, which will also be used here. Buckeridge & Newman (2010) also transferred the subfamily Elminiinae to a new family, Austrobalanidae from the Archaeobalanidae, which is the family given in WoRMS. Future revisions may support this or require further changes.

It was pointed out by den Hartog (1953) that contrary to most introduced species, E. modestus spread more rapidly to the south of its original introduction(s). Prevailing currents usually transport planktonic larvae northwards from the English Channel to the southern North Sea and the Wadden Sea as well as up along the coast of England and Scotland (Wolff, 2005). The rate of secondary spread has been calculated as 20-70 km per year (Bishop & Crisp, 1958; Geller, 1994).

Vector: It is believed to have arrived on hulls of navy vessels during World War II (den Hartog, 1953; Crisp, 1958). Secondary dispersal may have been as epifauna on shellfish or through planktonic larvae in ballast water.

Elminius modestus prefers sheltered shores (Allen et al., 2006). It grows very fast and tolerates lower salinity and higher temperatures than most native barnacles, except the other introduced species, Balanus improvisus Darwin, 1854. Even small specimens can create very strong water currents by fast beating of the "cirri", the modified thoracic legs (Crisp & Southward, 1961). Although it often occurs high in the intertidal, it prefers settling at depths of 3-4 m in the absence of competitors (Houghton & Stubbings, 1963). When Elminius modestus is out of water during low tide it traps a bubble of air under the closed opercular plates. It can then utilize the oxygen in that air bubble (Rainbow, 1984; Davenport & Irwin, 2003). The lowest temperature tolerated by E. modestus is about -6° C (Harms & Anger, 1989), and the highest temperature is about 38° C (Harms, 1984). In its native area water temperature varies between 4 and 21° C (Harms, 1999). Low winter temperatures causes high mortality and strongly decreased settling the following year (Harms & Anger, 1989). E. modestus is relatively euryhaline, though it is an osmoconformer (Foster, 1970). It survives periods of low salinity by closing the opercular plates, but cannot tolerate permanently low salinity (Rainbow, 1984). Total life span has been estimated as 5 years (Barnes, 1971).

Elminius modestus feeds mostly on small zooplankton, but can also filter phytoplankton (Rainbow, 1984). As an epibiont on commercial shellfish such as mussels and oysters, it is assumed to compete with these organisms for food. However, stable isotope analyses show that there is some degree of resource partitioning (Dubois et al., 2007).

Elminius modestus is one of the barnacles that accumulates Zn and other heavy metals taken up from dietary sources in its tissues, and it has been proposed to use it as a biomonitor (Walker et al., 1975; Rainbow & Wang, 2001). Other studies have concluded that it is unsuitable (Elliott et al., 1985). It has also been used in toxicity tests for chemicals used to dissolve oil-spills. Adults were more tolerant than larvae, but activity of cirri was affected by low concentrations. Acute toxicity stopped larval locomotion and development was retarded or completely inhibited (Corner et al., 1968).

Elminius modestus may be host of the parasitic isopod Hemioniscus balani (Spence Bate, 1860), which causes female castration in barnacles. Just one individual of this parasite is enough to cause castration (see: http://species-identification.org/species.php?species_group=crustacea&id=530)

Reproduction: Elminius modestus, like almost all barnacles, is hermaphroditic, though it requires cross-fertilization. It reaches sexual maturity about 8 weeks after settling, at a diameter of 6-7 mm (Rainbow, 1984). Breeding begins when the water temperature exceeds 6º C (Harms, 1984). An average sized animal produces about 1800-4000 eggs (Barnes & Barnes, 1968) and using a generation time of only 14 weeks and release of 12 broods per year very high fecundity has been calculated (Crisp & Davenport, 1955). E. modestus produces successive broods throughout the year, each brood being released after 2 weeks (Barnes & Barnes, 1968), though in winter months development may take 60-80 days (Crisp & Davies, 1955). E. modestus produces a chemical, which induces the nauplius larvae inside the ovisac to move vigorously till the egg capsule ruptures and the nauplius hatches (Hill et al., 1988).

The nauplius I is 250 x 125 µm (Barnes & Barnes, 1965). Nauplius larvae are positively phototactic (Barnes & Klepal, 1972). Duration of larval stages from hatching to cypris varies from about 40 days at 6º C to less than 10 days at 24º C, and also mortality in the laboratory was much higher at low temparatures (Harms, 1984). Mortality of nauplius larvae was lowest at salinities between 20 and 30 ppt, and development ceases around 16 ppt (Harms, 1999). Cypris larvae are attracted to places where adult conspecifics are present (Knight-Jones & Stevenson, 1950).

Elminius modestus competes with other shallow water barnacles for space. At its northern limit reproduction begins later than in the native species, and other species have already settled by the time E. modestus is ready to settle. Also, it is able to settle at higher levels of the shore than S. balanoides as well as deeper into subtidal levels (Harms, 1984). Because it may reproduce throughout the year it has a high reproductive potential, and in some places it is the dominating barnacle species (Lawson et al., 2004; Watson et al., 2005). In some places it may have completely replaced the native barnacles (Lawson et al., 2004).

E. modestus is frequently found fouling ships' hulls (den Hartog, 1953; Gollasch, 2002), which not only causes further spread of the species, but also is a nuissance to the shipping industry.

It is suitable as test organism for toxicity tests because it produces larvae throughout the year and the larvae are the most sensitive stage (Corner et al., 1968).