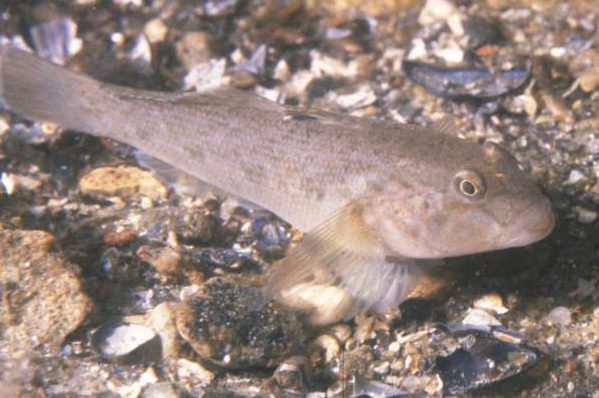 You have a Neogobius melanostomus (Round goby)

N. melanostomus is a fairly small bottom-dwelling fish, resembling a large tadpole in general appearance. Maximum size differs in various localities, from 12 cm for males and 11 cm for females in the Laurentian Great Lakes Upper Detroit River (MacInnis and Corkum 2000), to 25 cm for males and 19 cm for females in the Gulf of Gdansk (Sapota 2005). Round gobies are yellowish grey, with lateral blotches and a large black spot on the first dorsal fin. Breeding males are black, with white or white-blue edged caudal fins. The species has a fairly large head, the depth of the head being equal to 0.9 ÷ 1.2 of its width (Miller 1986). The body is soft and covered with fine scales that are definitely cycloid on the middle and anterior nape. The dorsal fin lack spines and the pelvic (bottom) fins are fused to form a suctorial disk that helps to anchor the fish to the substrate in flowing waters. For proper identification of N. melanostomus features like the number of rays in fins as well as the number of scales are important (Miller 1986).

Native area: N. melanostomus occurs in all shallow water regions of the Black Sea, the Caspian Sea, the Marmara Sea and in all areas of the Sea of Azov (Berg 1949)

Introduced area: At the end of 1950s, the first transfer of N. melanostomus outside its native range occurred when it was moved to the Aral Sea (Miller 1986). Most likely introduction took place together with stocks of grey mullet from the Caspian Sea (Moskalkova 1996). However, that population went extinct because of increasing salinity in the Aral Sea (Corkum et al. 2004).

During the last twenty years, N. melanostomus have been noticed in several separate areas, outside the range of their natural distribution. In 1985, N. melanostomus was found in the Moscow River near Moscow City (Sokolov et al. 1989). In 1990, the first round gobies were observed in the Baltic, in the Gulf of Gdańsk (Skóra and Stolarski 1993, 1995, 1996). In the same year N. melanostomus was found in the Great Lakes in North America (Crossman et al. 1992, Jude et al. 1992). Consequently, invasion of this region took place. By early summer 1999, fishermen reported the first round gobies in German Baltic waters at Rugia Island (H. Winkler, University of Rostock, unpubl. data cited in Corkum et al. 2004). In May 2003, N. melanostomus had been reported at several locations along the entire Baltic Sea coast of Germany, west to Rostock (K. Skóra, University of Gdansk, unpubl. data cited in Corkum et al. 2004). In addition to the invasion into the Baltic, N. melanostomus has spread up the rivers entering the Black Sea. In 2001, surprisingly, they were detected in the Danube River in Vienna. (Corkum et al. 2004). In May 2002, round goby was caught in RigaBay, in the eastern part of the Baltic (Henn Ojaveer, pers. comm.). In 2004, it was caught on open Baltic waters near LiepajaCity (Atis Minde, pers. comm.) In 2005, it was reported from the Finish waters (Erkki Leppakoski, Henn Ojaveer, pers. comm.). It also occurs in the Lithuanian Baltic waters (Sergej Olenin, pers. comm.). Along the Polish coast, round goby can be detected in small quantities in lakes connected with the sea and in coastal zones of the PomeranianBay.

N. melanostomus live in brackish and freshwater environments. In this scale, the Baltic can be included into the brackish waters category. Hypothetically, round gobies can also live in full oceanic salinity, but no such population exists. N. melanostomus is a bottom dwelling fish. It is typically found near sandy, stony bottoms, marine structures (piers, wharves) and sunken objects and among mussel beds, In the Puck Lagoon, which is a part of the Puck Bay, round gobies inhabit the muddy, sandy, humus­ containing bottom overgrown with benthic flora. This fish mostly stays in one place with noticeably restricted movement. Even in areas of rather strong water currents round gobies mostly stay in one place with only limited repositioning of pectoral fins (Charlebois et al. 1997, Corkum et al. 2004, Miller 1986, Sapota 2005, Sapota and Skóra 2005).

Reproduction: In the Gulf of Gdańsk, N. melanostomus spawning takes place from the beginning of May to the end of September. In that area, the male to female ratio is three or two to one (Sapota and Skóra 2005, Sapota 2005); in contrast, native populations have more or less equal sex proportions. Round gobies are multi-spawners; females can spawn repeatedly during the spawning season. In the Gulf of Gdańsk spawning takes place two to four times. Round gobies lay their eggs in nests guarded by males. More than one female can lay eggs in one nest.

The nests require solid substrate, but in general the Gulf of Gdańsk has a sandy bottom. All solid elements on the bottom can be used as a basis for round goby nests, including: stones, rocks, parts of wood, roots of vascular plants, and even dumped waste. Despite this, places suitable for nests are limited in the Gulf of Gdańsk, and the distance between nests is much shorter than in other regions.

Females are sexually mature at the age of 2 or 3 years, males one year later. After the spawning and nest defense period, males die. Some females can achieve reproduction in the year following the first spawning.

There is a wide range of fecundity in the Gulf of Gdańsk from 89-3841 eggs per female (Wandzel 2000, Sapota 2005), which means 9-143 eggs per gram of female body mass. Relative fecundity grows linearly with the growth of female body weight.

Investigations of the reproduction and lifecycle of N. melanostomus in the Baltic Sea in regions other than the Gulf of Gdańsk have not yet been conducted.

In the beginning of the 1990s, shallow water fish communities of the west part of the Gulf of Gdańsk were dominated by three spined sticklebacks (Skóra 1993, Sapota and Skóra 1996). Now N. melanostomus is also a dominating fish. There are not any direct influences between these species, as stickleback is more pelagic whereas the round goby is typically a bottom living fish. In the Puck Lagoon N. melanostomus exclusively dominates the shallow water zone. Two species: flounder (Platichthys flesus) and viviparous blenny (Zoarces viviparous) live in the same or similar habitats as the round goby. Both slightly changed their area of occurrence, leaving the shallowest waters for round goby Aside from this we have not observed any changes in populations of these species. This situation may change if the number of round gobies significantly increases in the Gulf of Gdańsk.

Round gobies are typical bivalvevorous. Bivalves (mainly blue mussel) constitute about 60% of N. melanostomus diet in the Gulf of Gdańsk. Arthropods (chiefly Idotea) are also an important food resource. (Skóra and Rzeżnik 2001, Wandzel 2003) Arthropods are most prominent as food for young, small individuals and in places of smaller bivalve quantities.

N. melanostomus is a very important food source for Black cormorants, constituting at least 60% of fish eaten by this bird (Bzoma 1996, Bzoma and Stępniewicz 2001).

Dillon, A.K., C.A. Stepien, 2001. Genetic and biogeographical relationships of the invasive round (Neogobius melanostomus) and tubenose (Proterorhinus marmoratus) gobies in the Great Lakes versus European populations. Journal of the Great Lakes Research 27: 267-280

MacInnis A.J., Corkum L.D., 2000. Age and growth of round goby Neogobius melanostomus in the Upper Detroit River. Transaction of the American Fisheries Society 129 (3):852-858

Moskalkova K.I., 1996. Ecological and morphophysiological prerequisites to range extension in the round goby Neogobius melanostomus under conditions of anthropogenic pollution. J. Ichthyol. 36: 584-590

Sapota M.R., 2004. Round goby (Neogobius melanostomus) fishy invader in the Gulf of Gdańsk - a new case of general species introduction into the Baltic. Hydrobiologia 514: 219-224

Wandzel T. 2003. The food and feeding of the round goby (Neogobius melanostomus Pallas, 1811) from the PuckBay and the Gulf of Gdańsk. Bulletin of the Sea Fisheries Institute Gdynia 1