You have a Cyprinus carpio (Common carpe) 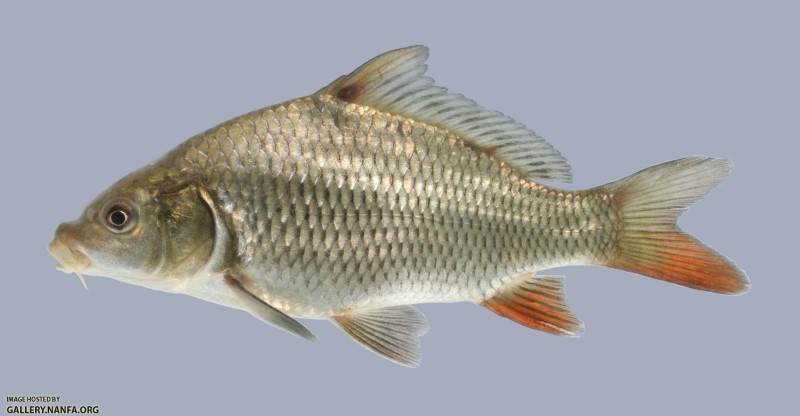 Native distribution: Common carp originated in Europe in rivers around the Black Sea and the Aegean basin (Kottelat, M. and J. Freyhof, 2007).

Vector: During the 1940s–1960s, various sturgeon stocks were released into the Gulf of Riga for the enhancement of commercial fish stocks (HELCOM, 2006 Assessment of Coastal Fish in the Baltic Sea Balt. Sea Environ. Proc. No. 103 A)

This species is omnivore, feeding on aquatic crustaceans, insects, worms, aquatic plants, algae and seeds. Its feeding technique, of grubbing around in the sediment and straining food from the mud, has caused problems in areas where the carp has been introduced. As well as uprooting submerged vegetation, it also increases the cloudiness of the water, which can have detrimental effects on native wildlife (Cole 1905; Cahoon 1953; Bellrichard 1996; Laird and Page 1996).

Cyprinus carpio can lives up to 50 years and usually spawns every year. In temperate waters spawning take place during the summer in patches of weeds. Males reproduce for the first time at 3-5 years, females at 4-6 (Freyhof & Kottelat, 2008). Age of maturity is related to latitude and altitude.

The sticky eggs are attached to water plants or other submerged objects (Kottelat and Freyhof 2007). Larvae and juveniles inhabit warm and shallow flooded river margins or backwaters, feeding mostly on very small zooplankton (rotifers). Reproductive success is restricted to years when the water level starts rising in May and when high temperatures and flooding of terrestrial vegetation last for a long period during May and June (Kottelat andFreyhof 2007). The sticky yellowish coloured eggs attach to vegetation, and are not guarded by the parents. A typical female can lay over a million eggs in one breeding season (Pethiyagoda 1991).

Cyprinus carpio is regarded as a pest fish because of its widespread abundance and because of its tendency to destroy vegetation. It also has the ability to increase water turbidity by dislodging plants and rooting around in the substrate, causing a deterioration of habitat for species requiring vegetation and clean water (Cole 1905; Cahoon 1953; Bellrichard 1996; Laird and Page 1996). There is also evidence that Cyprinus carpio prey on the eggs of other fish species (Moyle 1976;

Cole, L.J. 1905. The German carp in the United States. Pages 523-641 in Report of the Bureau of Fisheries for 1904. U.S. Department of Commerce and Labor. Government Printing Office, Washington, D.C.