You have a Callinectes Sapidus Rathbun, 1896 – American blue crab

Males are generally bigger than females and have blue "fingers" on the chelae; females have orange ones. All legs in both sexes are blue. The carapace is greyish or greenish brown. The carapace is about 17 cm across, though specimens up to 27 cm have been caught. It is much shorter than wide. There is a pair of long, pointed spines at the lateral edges of the carapace and 8 smaller spines in front of these. As in all swimming crabs, family Portunidae, the 5th pair of legs are flattened, paddle-like, adapted for swimming. The abdomen of males is very narrow compared to e.g. Carcinus maenas (Linnaeus, 1758). Another native portunid crab is Liocarcinus depurator (Linnaeus, 1758), which does not have the long lateral spines on the carapace. For both the native species colouration differs widely from that of C. sapidus. In the native area several similar species of Callinectes occur, but these have apparently not been introduced to other regions (see World Register of Marine Species [WoRMS]) 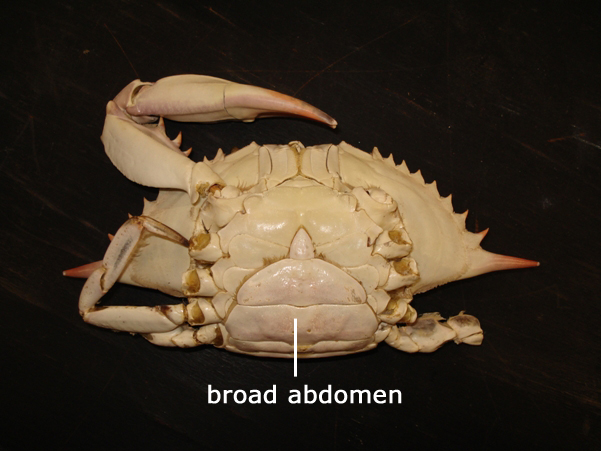 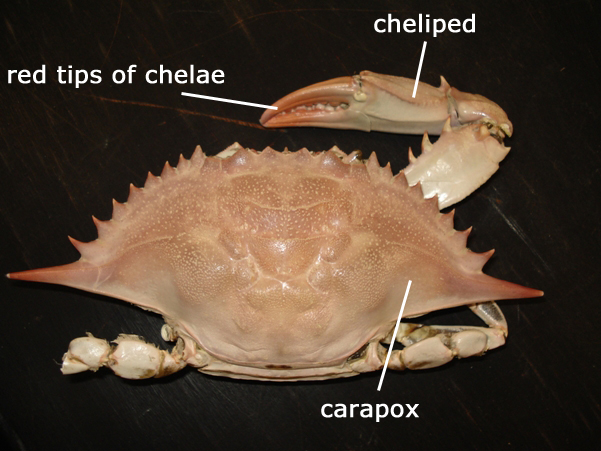 Native area: East coast of the Americas from Nova Scotia, Canada to northern Argentina, but it is most abundant between Massachusetts and Texas (Nehring et al., 2008).

The American blue crab has also been introduced to the Mediterranean, where it was first recorded in Greece in 1948 and in Italy in 1949 (Gennaio et al., 2006). There are also some records from the Venice Lagoon, from southern Italy, Sicily and the Gulf of Genova (Gennaio et al., 2006). Presently it occurs regularly in the Adriatic Sea, though it is unknown if it is established (Onofri et al., 2008). It is considered established on the Albanian coast of the Adriatic, where it was first observed in 2006 (Beqiraj & Kashta, 2010). It is also established on the Turkish Mediterranean coast (Atar et al., 2002), where it was first discovered in 1959, but appeared to have already been established for some time (Holthuis, 1961). This paper also reported an established population along the Mediterranean coast of Israel. Introduction of C. sapidus to the Black Sea has been described by Zaitzev & Mamaev (1997); the first record is from 1967 when it was found at the Bulgarian coast of the Black Sea. More recently (2002-2003) it has also been found on the coast of Romania (Micu & Abaza, 2004), in the Sea of Marmara and the Dardanelles (Tuncer & Bilgin, 2008). Whether it has been introduced with ballast water directly from North America, or whether it has spread or been introduced from the Mediterranean is unclear.

Blue crabs apparently also occurs along the coast of Nigeria in western Africa (Ololade et al., 2008), but whether this is a separate introduction or secondary dispersal from Mediterranean or East Atlantic populations is unknown. It might also be a misidentification as there are a couple of native species of Callinectes in western Africa (WoRMS).

Vector: Most likely larvae have been transported in ballast water. It is possible that individual crabs can cling to floating objects and drift with currents across the Atlantic Ocean, but this is not a likely vector.

The blue crab is an important predator in its native ecosystem, and because it is also an important species for fisheries, a lot of information is available. Two entire issues of the journal Bulletin of Marine Science, volume 46(1) from 1990, and volume 72(2) from 2003 are dedicated to papers on blue crab. Furthermore one double issue, volume 319(1-2) 2005, of Journal of Experimental Marine Biology and Ecology is dedicated to papers on blue crab; unfortunately this is not open access. Blue crab is a predator of bivalves, including commercial species such as oysters, clams and mussels (Seed, 1982; Arnold, 1984; Eggleston, 1990; Seitz et al., 2001). Other invertebrates are also included in the diet of blue crabs. Most feeding studies have been carried out in the laboratory because the native ecosystem structure and function are highly complex. Prey selection depends on density and relative abundance of prey as well as substrate and habitat complexity (Seitz et al., 2001; Hovel & Lipcius, 2002). Cannibalism is an important cause of mortality in blue crabs, and predation by several species of fishes is also important. Other causes of mortality may be low winter temperatures and diseases (Hines, 2003). Temperatures below 3° C cause increased mortality, especially if salinity is also low (Rome et al., 2005).

Callinectes sapidus has a broad tolerance of temperature and salinity, but may avoid oxygen depletion by swimming away (Hines, 2003). It has a short life span, usually less than 4 years (Främmande Arter, 2006). Juvenile blue crabs use seagrass beds as nursery areas and crab mortality is higher if patches of seagrass are small and widely separated (Hovel & Lipcius, 2002). Blue crabs are highly susceptible to predation, including fishery, immediately after molting, when the exoskeleton is still soft; soft crabs is a valued fisheries resource in the native area (Hines, 2003).

Considering the large amount of literature on this species, it is surprising that apparently there have been no molecular studies to attempt identification of source population of introduced populations. In fact there are very few molecular studies on blue crabs altogether.

Callinectes sapidus is host to several epifauna and parasite species, such as the castrating rhizocephalan Loxothylacus texanus Boschma, 1933 (Reinhard, 1950), the barnacle Octolasmis muelleri (Coker, 1902), which attaches to the gills of the crab (Gannon, 1990) and several microbial parasites (Shields, 2003), some of which may be responsible for increased mortality (Hines, 2003). Epifauna fouling includes bryozoans, barnacles, hydroids, mussel and oyster spat (Shields, 2003). Blue crabs may also accumulate algal toxins from their bivalve food, and this may pose a risk to humans consuming the crabs (Garcia et al., 2010).

Reproduction: Blue crabs reach sexual maturity at carapace width of about 10 cm. Mating takes place in relatively low salinity areas of estuaries (Epifanio, 2003). Female crabs usually mate only once, but can produce many egg masses. Males may mate several times in a spawning season, but the amount of sperm decreases after the first mating (Jivoff, 1997). Sperm transfer takes place immediately after the final molting of the female and may last several hours. After mating females migrate to higher salinity within the estuary to spawn (Tankersley et al., 1998). Females spawn 2-6 million eggs per brood, which are brooded for about two weeks during which time the colour of the egg mass changes from orange to black (Jivoff, 2003). Egg diameter is about 270 µm (Darnell et al., 2009). Females make a second migration to the mouth of the estuary when larvae are ready to hatch (Tankersley et al., 1998).

There are 7 or 8 zoea stages, which all have the same characteristic pattern of chromatophores (pigment spots) on the carapace, and one megalopa stage, which molts into the first crab stage. All development stages have been described in detail and illustrated (Costlow & Bookout, 1959). The major part of larval development takes place in open coastal waters, and larvae are carried by prevailing currents. When the megalopa stage is reached they enter an estuary to complete metamorphosis (Epifanio, 2003).The first zoea stages need at least 20 ppt salinity for development, and total development time at 25° C and salinities from 20 to 30 ppt, was 40-60 days (Costlow & Bookout, 1959), which is long enough for transoceanic transportation in ballast water. Cannibalism sets in at the megalopa stage when functional chelae are developd (Zmora et al., 2005). Juvenile crabs go through 18-20 molts to reach sexual maturity. When juvenile crabs reach instar 4 or 5 they move out of the seagrass areas and disperse throughout the estuary for foraging (Díaz et al., 2003). 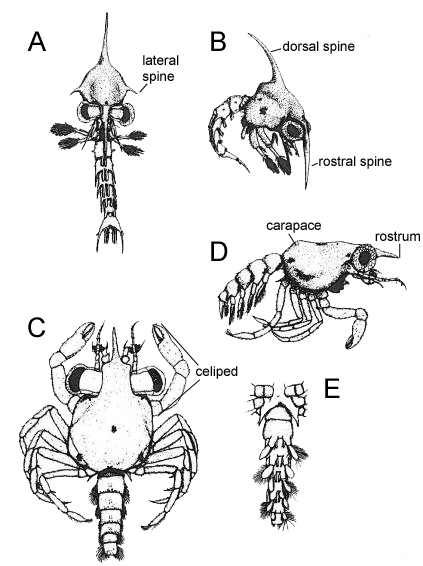 Competition with other crabs has been implied as an impact for Mediterranean populations (Gennaio et al., 2006). It is also known to feed on fish caught in nets and to damage fishing gear (Främmande Arter, 2006). In the Black Sea C. sapidus arrived after several native decapod species had disappeared (Micu & Abaza, 2004). In comparison with the amount of literature on impacts of the European green crab, Carcinus maenas, in its introduced range, there are remarkably few studies of impacts of blue crabs in the introduced area. In the native area of C. sapidus there is considerable interaction between the blue crab and C. maenas (MacDonald et al., 2007). It must be assumed that these interactions will also take place where C. maenas is the native species and C. sapidus the introduced species.

Blue crab is an important fisheries species in its native area, and since overexploitation has occurred in recent times (Sharov et al., 2003; Zmora et al., 2005), there is a large body of scientific publications, technical "grey" reports, and popular, including internet resources, about this aspect. In the USA fishery is by special dredges and traps. The value in 2001 was about 150 million USD (Zmora et al., 2005). Besides the commercial fishery there is also a substantial recreational fishery. There is also a valuable trap fishery in Turkey and legal size is a carapace width of 7 cm (Atar et al., 2002).

Fishery on the coast of the USA is regulated with closed season, gear restrictions and minimum legal size (carapace width 127 mm), and catch limits. Attempts have been made to produce hatchery reared juveniles for stock enhancement, but rearing beyond the final zoea stage requires shelter and low stocking density to prevent cannibalism (Zmora et al., 2005). Adult female crabs, spawning and hatching areas are protected in MPACs (Marine Protected Areas and Corridors) (Lipcius et al., 2003). There appears to have been no attempts to manage blue crabs in the introduced range, though fishery in Turkey is managed with a minimum legal size.