You have a Rhithropanopeus harrisii (Gould, 1841) – Harris Mud Crab

Taxonomic remarks: This species was described as a new species, Pilumnus tridentatus Maitland, 1874, from the Zuiderzee in the Netherlands and only synonymized with the American species Rhithropanopeus harrisii (Gould, 1841) in 1949 (Wolff, 2005). Some European authors consider the European crab a separate subspecies, R. harrisii ssp. tridentatus (Buitendijk & Holthuis, 1949; Turoboyski, 1973; Kidawa et al., 2004).

This is a small crab species with a maximum carapace width about 2-3 cm. Two characters distinguish this species from other crabs in Nordic waters: large, white-tipped claws of unequal size and shape, and an almost smooth anterior margin of the carapace, i.e. the margin between the eyes has no or a very indistinct median notch. Males are generally larger and have larger claws than females. The general body colour is greenish-brown. 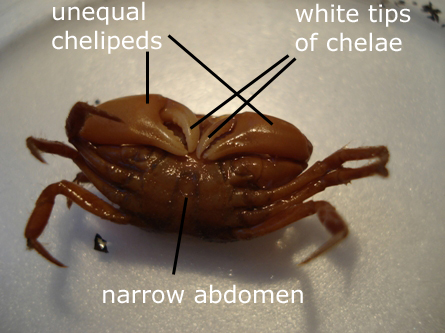 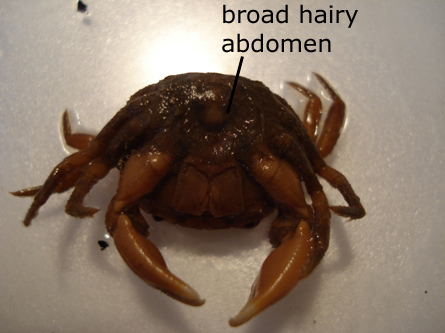 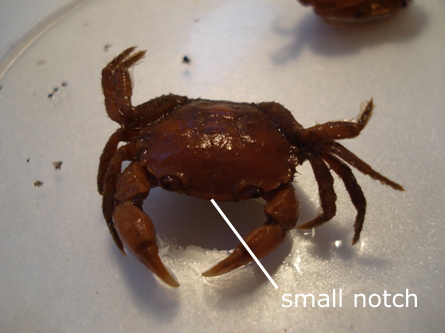 Native area: This species lives in estuarine and brackish waters of the east coast of North America, from New Brunswick (Canada) to the Gulf of Mexico (Roche & Torchin, 2007).

Introduced range: The introduction history of this species has been rather difficult to trace. This may be because it was considered a native species from the description of the European species in 1874 until its synonymization in 1949. The first European record dates back to before 1874 when it was described as a new species from the Zuiderzee in the Netherlands (Wolff, 2005). The first German record is from 1936 in the Kiel Canal connecting the North and Baltic Seas (Nehring, 2000; Gollasch & Nehring, 2006). It first appeared on the Baltic coast of Germany between 1948 and 1950. Since then it has spread to estuaries of several rivers, including the Eider, Elbe, Ems, Weser and on a few occasions even the German section of the Rhine. The increase in abundance has taken place chiefly during the 1990s (Nehring, 2000). There are a few Danish records from the harbour of Copenhagen in 1953 and 1954 (Rasmussen, 1958). The next record is from 2008, just south of Copenhagen, but recently R. harrisii has become established in south-eastern Denmark (Olesen & Tendal, 2009). In the Baltic it has been found in Poland since 1951 (Normant et al., 2004; Grabowski et al., 2005) and in Lithuania since 2000 (Bacevičius & Gasiūnaitė, 2008). It has not yet reached Swedish (Främmande Arter, 2006) or Finnish waters. In France it first appeared in 1955-1956 (Goulletquer et al., 2002), in Portugal in 1989 (Gonçalves et al., 1995b), and in Spain in 1990 (Roche & Torchin, 2007). In the U.K. R. harrisii only occurs in one locality, Cardiff Docks in Wales, where it was first found in 1996 (Eno et al., 1997). Molecular studies have shown that several haplotypes occur in European populations that have not been found in native populations, and also that haplotype diversity is as high in European as in native populations (Projecto-Garcia et al., 2010).

The first record from the Pacific coast of the USA is from 1937, when it was found in San Francisco Bay. Presently it occurs in Oregon and California, but not south of San Francisco Bay. Established populations occur at low densities at few, distinctly separated localities. Molecular data indicate that the Pacific populations originate from a single event of introduction from the Atlantic coast of the USA (Petersen, 2006). Also genetic diversity is lower in the Pacific coast population than in the native range. R. harrisii was recently found in two man-made lagoons along the Panama Canal (Roche & Torchin, 2007). The first specimens had been found in 1969, but apparently the species was not established. In 2007 numerous specimens, including ovigerous females were found, and the species is now considered established and invasive (Roche et al., 2009).

Vector: It may have been introduced to the west coast of the USA by transfer with oysters, Crassostrea virginica (Gmelin, 1791) (Roche & Torchin, 2007). Its association with international ports in most European countries indicates that it has been transferred with shipping, either as larvae in ballast water or as hull fouling. Rasmussen (1958) speculated that since it was found feeding on another alien species, the polychaete Ficopomatus enigmaticus (Fauvel, 1923), in the harbour of Copenhagen, it had been introduced with this worm from hull fouling.

R. harrisii is a scavenger, feeding on detritus, algal material or small invertebrates, including amphipods, polychaetes and bivalves (Hegele-Drywa & Normant, 2009). R. harrisii is an osmoregulator, and at salinities between 1 and 27 ppt it is hyperosmotic; at higher salinities it is slightly hypoosmotic (Reisser & Forward, 1991). It can only survive short period in pure freshwater (Normant et al., 2004), but has been found in reservoirs in Texas with a salinity of only 0.4-0.5 ppt (see http://www.tarleton.edu/Faculty/dekeith/MudCrab.html). Similar results were found for Polish crabs that are adapted to constant low salinity (5-7 ppt) (Normant & Gibowicz, 2008). It is also tolerant to anoxia and to several pollutants (Normant et al., 2004). R. harrisii is eaten by eels, flounder and cormorants (Hegele-Drywa & Normant, 2009) and by round goby and perch (Bacevičius & Gasiūnaitė, 2008).

In its native range R. harrisii is often parasitized by the rhizocephalan Loxothylacus panopaei (Gissler, 1859) (Alvarez et al., 1995; Grozholz & Ruiz, 1995), which castrates the crab. The parasite appeas to be an introduced species itself, originating in the Caribbean and the Gulf of Mexico (Hines et al., 1997). Parasite abundance is highest when salinity is above 15 ppt (Reisser & Forward, 1991). The parasite has apparently not been introduced with the crab anywhere

Reproduction: Males are mature at a size of about 4 mm and females mature at slightly larger size (Alvarez et al., 1995). Females do not molt prior to mating (Turoboyski, 1973). In Poland ovigerous females appear in May or later, depending on temperature, and females are buried in the sand during egg laying to facilitate the attachment of the eggs to the pleopods (Turoboyski, 1973). Females usually produce between 1300 and 5000 eggs per brood (Turoboyski, 1973). Eggs are brooded for 15-19 days, and a female can produce up to 4 broods with a single mating (Morgan et al., 1983). Hatching larvae are released by pumping movements of the mother's abdomen (Forward et al., 1982; Forward & Bourla, 2008). This species goes through four zoea stages and one megalopa (Gonçalves et al., 1995; Nehring, 2000). The larvae remain within the estuaries where they hatch (Fitzgerald et al., 1998). Stage IV zoeae perform nocturnal vertical migrations, like many zooplankton species (Forward, 1985). This may be the mechanism responsible for retention of larvae inside the estuary with low salinity (Forward, 2009). Vertical movements can also be used to avoid predators, such as the ctenophore Mnemiopsis leidyi A. Agassiz, 1865 (Forward, 2009). The first crab stage is reached after 11 to 43 days, depending on temperature. Also, larval development time increased at very low (5 ppt) and very high (30 ppt) salinity (Gonçalves et al., 1995).

Evidence for negative impacts is mostly anecdotal. It may alter ecosystem functioning by competing with native crabs, being a predator on native benthic invertebrates, and being a prey of native predators. In Polish waters, where there are no native crabs, it probably has impacted the original food web structure. Where it occurs at high densities it may also cause fouling of fishing gear and damage the catch. In Texas water reservoirs it has caused fouling problems of water pipes (see http://www.tarleton.edu/Faculty/dekeith/MudCrab.html). R. harrisii is host for the "white spot baculovirus", which affects penaeid shrimps and blue crabs in its native region.

Certain insecticides are lethal to larvae of R. harrisii at low concentrations (Christiansen et al., 1978), and it has been proposed to use these chemicals to control the crab. Biological control using the castrating rhizocephalan Loxothylacus panopaei has also been suggested (ISSG, 2008 – see: http://www.issg.org/database/species/management_info.asp?si=1217&fr=1&sts=&lang=EN). The latter measure should be used only within the native area of R. harrisii where the parasite already occurs.