Although the red king crab looks like a real crab, it is more closely related to hermit crabs, porcelain crabs and squat lobsters, which all belong to the Anomura. This is seen by the fact that it has only three pairs of walking legs in addition to the chelipeds; the posteriormost (5th) pair of legs are reduced and usually hidden in the gill chamber (McLaughlin & Lemaitre, 1997). Another difference is the size of the chelipeds, which in most brachyuran crabs are larger than the walking legs; in the Lithodidae the chelipeds are much shorter than the walking legs. There is only one native species in the family Lithodidae (stone crabs), Lithodes maja (Linnaeus, 1758), the deep-sea (or stone, or Norway) king crab (or spiny crab). This is the only species that can be mistaken for the red king crab. P. camtschaticus is one of the largest crustaceans in the world; its body weight may exceed 10 kg, whereas L. maja weighs less than 2 kg. The leg-span of P. camtschaticus can be almost 2 m and the carapace up to 220 mm long (Jørgensen, 2006). The carapace of L. maja is much more spiny than that of P. camtschaticus (ICES, 2005) and only 120 mm wide. Two other species of Paralithodes live in the North Pacific region, the blue king crab, P. platypus Brandt, 1850 and the Hanasaki crab, P. brevipes (H. Milne Edwards and Lucas, 1841). 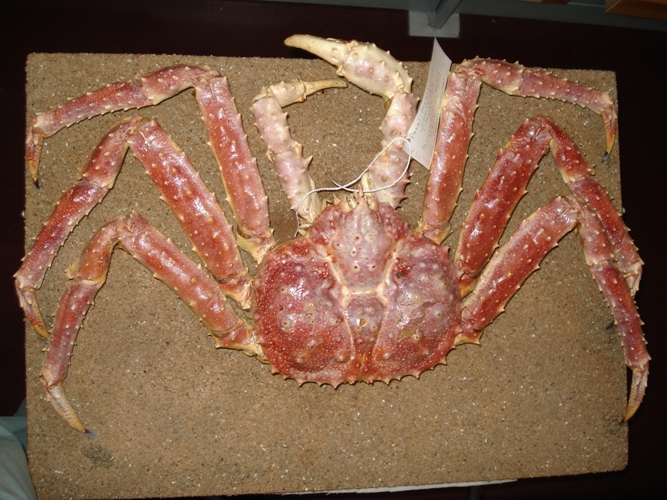 Native area: Northwestern Canada to Vancouver Island, Alaska, Aleutian Islands, Bering Sea, Sea of Okhotsk and northern Japan (ICES, 2005). In its native area it is a coastal species, living at depths from about 20 to more than 400 m, juveniles occurring in shallow water and pre-mating adults in deep water.

Introduced area: Barents Sea. The introduction of Paralithodes camtschaticus is probably the best documented introduction of a marine invertebrate. The exact number of specimens and the date and location of capture and release during the period between 1961 and 1969 are given in Orlov & Ivanov (1978), who also describe the release of hatchery-produced larvae and the first re-captures of crabs in 1974 in the Barents Sea. A further release of took place in 1977-1978 (Jørstad et al., 2007). Until the 1990s re-captures were rare, but since 1992 a commercial fishery has taken place. P. camtschaticus has only spread slowly along the coast of Norway, but its abundance has apparently increased tremendously (ICES, 2005). Presently its distribution reaches to Balsfjorden (69° N) though a single individual has been caught south of Lofoten (64° N) (Jelmert, 2008). Molecular studies have not been able to detect any major differences between populations in the Barents Sea and the native areas (Jørstad et al., 2007), though the population from Varangerfjord shows some differentiation (Zelenina et al., 2008).

The red king crab tolerates temperatures between –1.7 and +11° C (ICES, 2005). They may live for 20 years. King crab larvae feed on phyto- and zooplankton (ICES, 2005), and can only tolerate starvation for short periods (Paul & Paul, 1980). This is in contrast to the native Lithodes maja, which has lecithotrophic development (Anger, 1996). Juvenile king crabs feed on hydroids and later on larger benthic invertebrates, including bivalves, barnacles and echinoderms (ICES, 2005). They seem to prefer prey with calcareous shells, and this may be because they need calcium for their own exoskeletons. King crabs can either grasp their prey and tear chunks for ingestion, or they can filter, with setae on the third maxilliped, smaller food particles, stirred into suspension by the smaller cheliped (ICES, 2005). Young and adult male crabs grow about 17 mm with each molt; females grow 14 mm per molt until they spawn, after which growth decreases to 5 mm per molt (Nilssen & Sundet, 2006). P. camtschaticus is able to spread by "walking" – up to about 400 km per year (DAISIE, 2006), although they may actually walk 270 m per hour (Jørgensen et al., 2007).

Juvenile king crabs show a special behaviour, known as "podding", a phenomenon where hundreds or even thousands of juvenile crabs cluster to form dense mounds (Dew, 1990). These pods are formed on a daily basis, breaking up during the night when the crabs are foraging. Juvenile king crabs prefer complex substrates in the laboratory as well as in the field (Stevens, 2003).

Like most crustaceans P. camtschaticus responds to predator attacks, including human handling, by autotomizing limbs (Dvoretsky & Dvoretsky, 2009a). In the Russian part of the Barents Sea almost 50% of the crabs showed signs of limb autotomy, and it is assumed that the major cause for injury in mature crabs is human handling.

Reproduction: Sexual maturity is reached at a carapace length of about 110 mm (Hjelset et al., 2009), or when the king crabs are about 7 years old (Zhou et al., 1998), though newer data indicate that they may have to be 8 or 9 years old (Loher et al., 2001). In Alaska mating season begins in February (Powell et al., 1973). Mature king crabs migrate to shallow water, 10-30 m, for mating and spawning (ICES, 2005). Due to commercial fishery on males, females strongly outnumber males in mating aggregations. Mating takes place within a few hours after the female has molted (Powell et al., 1973). Young females mating for the first time mate with larger males, whereas older females usually mate with smaller males (Powell et al., 1973). Young males are less successful in mating than larger ones (Paul & Paul, 1990). Large males can fertilize three females successively in one season (Paul and Paul, 1997). Eggs are usually spawned within 24 hours after molting. A female crab may spawn up to 400,000 eggs. The eggs are brooded for about 11 months (Jørgensen, 2006). In the native area fecundity may be lower, 114,000-296,000 eggs per female (Sherbakova et al., 2008). After mating and spawning crabs migrate into deeper water, and the sexes occur separately till the following year (ICES, 2005).

Illustrations of P. camtschaticus larvae can be seen in Epelbaum et al. (2006).

Larvae hatch as prozoeas, but moult into the first zoea stage immediately after. They go through 4 zoea stages after which they reach the glaucothoe stage (corresponding to the megalopa stage of true crabs), which is the settling stage. The entire larval development takes about two months (ICES, 2005). In the field (Alaska) larval development time varied from 56 to 113 days, depending on temperature (Shirley & Shirley, 1989). The duration of larval development has also been determined in the laboratory. At 7-8° C each of the zoea stages lasted 10 days (Epelbaum et al., 2006). The glaucothoe stage lasted 18 days and the first crab stage 23 days, both at 10-11° C. Dry weight meanwhile increased from 0.1 mg to 1 mg. Mortality is very high, especially from Zoea IV to glaucothoe stages (Shirley & Shirley, 1989). Feeding in zoea larvae has been described and illustrated by Epelbaum et al. (2007). They can capture food actively by creating a feeding current, or passively while sinking. Cannibalism was also observed. Experimental studies have shown that stage I zoeae need salinity above 20 ppt and temperature below 15° C; stage II zoeae required temperatures below 3° C and salinity higher than 25 ppt. In the Sea of Japan the zoeae first appear in mid-April, and zoea IV is reached in late May during which period water temperature increases from 3° to 9° C (Sherbakova et al., 2008). Appearance of zoeae in the plankton is usually closely synchronized with the spring bloom of phytoplankton (Shirley & Shirley, 1989).

The red king crab causes damage to fishing gear and the captured fish. Also, they consume large amounts of benthic invertebrates, which otherwise could have been food for native predators. Oug & Sundet (2008) found that populations of sea stars and brittle stars had been greatly reduced in Varangerfjord after the introduction of the red king crab. They may also cause significant damage to commercial scallop beds (Jørgensen, 2005). In laboratory experiments scallops are preferred prey though small crabs strongly preferred sea stars (Jørgensen & Primicerio, 2007).

The red king crab can be parasitized by dinoflagellates of the genus Hematodinium, which causes a bitter taste to the meat, and usually results in the death of the host animal (Ryazanova, 2008).

Fishery on king crabs is economically important in Alaska and elsewhere in its native region. Hence several studies have been carried out to elucidate its life history and population dynamics. Alaskan population declined dramatically between 1978 and 1986 (Loher & Armstrong, 2005). Management measures include banning capture of ovigerous females and males under a certain size. Fishery in the Bering Sea was banned 1983 after – unfished – female stock had declined as dramatically as the fished male stock (Loher & Armstrong, 2005).

In Norway three management strategies have been proposed. One is to maintain the breeding population through commercial, regulated fishery. A second option is to try to reduce the population through more or less unregulated fishery. The third option is to decide a certain western border beyond which the king crab should not be permitted (ICES, 2005). However, all of these options seem difficult to implement and enforce.

Commercial fishery In Alaska commercial fishery began in the 1930s. Mostly Russian and Japanese fishing vessels were involved. In the 1960s U.S. fishery began and after 1974 foreign fishing vessels were banned (Zheng et al., 1997; Zimmermann et al., 2009). Trawling and other nets were banned in 1960, and only crab-pots could be used (Zimmermann et al., 2009). A size-limit of 178 mm carapace width was imposed in 1963 (Powell et al., 1973). Nevertheless the stock crashed in 1981 (Zimmermann et al., 1997), and all fishing was banned in 1983. Since 1984 a small strongly regulated fishery has been permitted. Numerous studies have been carried out to assess breeding stock and determine TAC (mature males, ≥135 mm carapace length, only) for sustainable exploitation. Fishing is banned during mating and spring molting season (Zheng et al., 1997). During the 1980s trawling for sole caught a considerable by-catch of mature female king crabs, and this has been claimed to be responsible for the lack of regeneration of a large spawning stock (Dew & McConnaughey, 2005). Trawling is also known to cause injuries to the king crabs when the net passes the crabs on the bottom (Rose, 1999). Stock assessments showed a maximum population in 1978 of about 140 million crabs, and a minimum population of 6 million crabs in 1986 (Loher & Armstrong, 2005). Through the 1990s population size varied between 6 and 22 million crabs.

Fishery in the Barents Sea is based on the same principles as in Alaska, i.e. only mature males over 137 mm carapace length can be caught, and fishing is banned during breeding season. However, a large by-catch in cod gillnet fishery has also been reported (Godøy et al., 2003a). Pot design has been modified to minimize "ghost fishing" by lost pots (Godøy et al., 2003b) and to let sublegal crabs escape (Salthaug & Furevik, 2004). Fishery now is licensed. The number of vessels has increased from 4 in 1994 to 253 in 2007 and the TAC increased corespondingly from 11,000 to 300,000 crabs. It has been proposed to include females with carapace length over 137 mm (Hjelset et al., 2009).