You have a Homarus americanus H. Milne Edwards, 1837 – American lobster

Up to 64 cm long, but usually less than 30 cm. The rostrum has one or more denticles on the ventral surface. This is not found in the European lobster, H. gammarus (Linnaeus, 1758). In H. americanus the ventral teeth on the rostrum are visible even in the first zoea larval stage (Helluy & Beltz, 1991). Both species are variable in colour, though blue colour may be more common in H. americanus. It is often claimed that the American lobster has relatively larger chelae than the European one, and that the cutting chela has more pointed tips. However, this is not a reliable character. There is little genetic difference between the two species (Hedgecock et al., 1977; Mangum, 1993), though more modern techniques have revealed higher genetic diversity in H. americanus than in H. gammarus, indicating that the European lobster has had shorter time for differentiation (Jones et al., 2003). 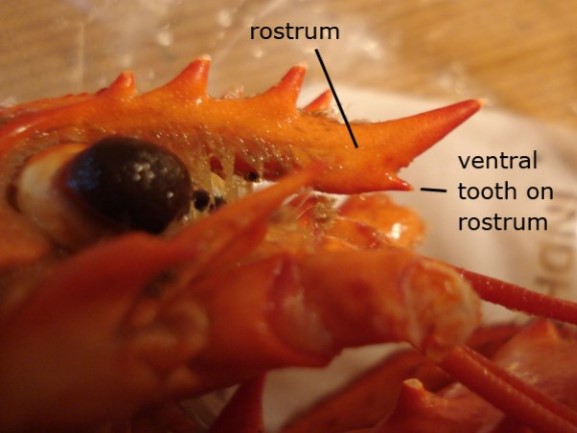 Introduced area: Norway, status uncertain. The first specimen was caught in Oslofjord in 1999, and in the following years several more specimens, which have been genetically identified as H. americanus have been collected from several localities in southern and southwestern Norway. A few of these specimens have been ovigerous females (Hopkins, 2001; Jørstad et al., 2007). A few specimens have been found on the Swedish west coast in 2008 (Främmande Arter, 2008), and a single individual in the Danish part of Øresund was caught in December 2006 (see article , last accessed 10 March 2015). It is considered not established in these two countries.

It has been attempted to transplant H. americanus to the Pacific coast of the USA several times. However, these attempts have been unsuccessful (see USGS factsheet). There have also been experimental releases of H. americanus in Japan during the 1980s (Kittaka et al., 1983) and culture experiments (Lim et al., 1997). Its present status is Japan is unknown.

Vector: American lobsters found in Nordic waters have almost certainly been released or have accidentally escaped from holding tanks of the live food trade.

Homarus americanus occurs from the intertidal to more than 700 m depth, though most often it is found in coastal waters between 4 and 50 m depth (Jones et al., 2003). H. americanus is a predator of bivalves, crustaceans and other invertebrates. It competes for food resources with other large decapod crustaceans, including the invasive green crab, Carcinus maenas (Linnaeus, 1758), a native of European waters (Novak, 2004; Williams et al., 2006).Juveniles include coralline algae and foraminiferans in their diet (Sainte-Marie & Chabot, 2002). Juvenile lobsters are eaten by predatory fish and crabs (Lavalli & Barshaw, 1986; Barshaw & Lavalli, 1988) and cannibalism also occurs (Hanson, 2009).

H. americanus is considered adult at a carapace length of 70-80 mm (Comeau & Savoie, 2002; Bowlby et al., 2008), but depending on temperature may vary from 65 to 110 mm (Wahle & Steneck, 1991). Early records of giant specimens weighing 20 kg or more have not been confirmed; some big specimens housed in museum collections had a maximum weight of 11-12 kg (Herrick, 1895). A sexual dimorphism usually accompanies sexual maturity so that males have larger and heavier chelae than females. However, this character develops gradually with age (Conan et al., 2001). Adult lobsters usually molt one time per year, most often between July and September. Males show higher size increase during molts than females (Comeau & Savoie, 2001). There is little or no genetic differentiation between populations from different localities (Harding et al., 1997), though more elaborate new techniques have shown more differentiation between populations (Jones et al., 2003).

Juvenile lobsters need shelter and prefer habitats, which provide shelter, such as cobble or vegetated substratum, in which burrows can be constructed (Lavalli & Barshaw, 1986; Wahle & Steneck, 1991; Barshaw et al., 1994). Juvenile lobsters pass through several stages characterized by different behaviour. The first benthic stage, with a carapace length between 4 and 14 mm, spend almost all the time in shelter; later stages spend increasing amounts of time outside the shelter. This is assumed to correspond to decreasing demand for protection against predators and increasing demand for food (Sainte-Marie & Chabot, 2002). Usually lobsters live individually in shelters, but during mating season a female will move into the shelter of a dominant male (Cowan & Atema, 1990). Lobsters are nocturnally active, making feeding excursions and returning to shelter during the day (Ennis, 1984; Novak, 2004). Chemoreception is important for localizing prey (Derby & Atema, 1982)

Adult lobsters may undertake seasonal migrations, either in search of food or to find suitable shelter for the winter (Bowlby et al., 2008). In the spring they move from deeper water to shallow water and in the fall in the opposite direction (Herrick, 1895). Those lobsters that move about the most also have the greatest chance of getting caught in traps. Walking speed has been calculated to be about 12 km per day maximum, with a mean of about 0.5 km (den Heyer et al., 2009).

American lobsters may be infected by a bacterium, Aerococcus viridans. This bacterium causes a disease, gaffkemia or "red tail disease", which is deadly to European lobsters, and causes high mortality in American lobster. However, a small proportion of American lobsters are resistant (Stewart & Marks, 1999; Hopkins, 2001; see also the Lobsterscience report). Other bacteria cause the so-called "shell disease", also known as "rust disease" or "black spot disease", which break down the exoskeleton and necrosis of gill filaments, but also seems to be associated with decreased viability of spermatozoa (Lavallée et al., 2001; Glenn & Pugh, 2006; Comeau & Benhalima, 2009). A third diease is caused by the ciliate Anophryoides haemophila, which causes depletion of hemocytes and failure of blood clotting mechanism (Lavallée et al., 2001).The American lobster is also host of the commensal cycliophoran Symbion americanus Obst, Funch & Kristensen, 2006. Barnacles, serpulid polychaetes and other fouling organisms may be found attached to the exoskeleton especially of larger specimens.

Reproduction: Lobsters show complex behaviour during mating season. Pheromones released in the urine trigger either aggressive behaviour towards same-sex lobsters or courtship behaviour in opposite-sex encounters (Bushmann & Atema, 1997). A female may share the shelter of a male for one to three weeks during which molting and copulation take place. Other females may postpone their moulting till the female has left the dominant male shelter. Copulation takes place shortly after the female has moulted (Cowan & Atema, 1990; Cowan, 1991). Most females spawn the year after copulation, but some spawn in the same year (Comeau & Savoie, 2002). Spermatophores may be stored for several months before fertilization of eggs takes place. Fertilization is external during spawning (Aiken et al., 2004). Spawning takes place in July – August. Nauplius and metanauplius stages develop inside the eggs (Helluy & Beltz, 1991). Females carry the eggs on the pleopods for 9-10 months (Incze et al., 2010). Fecundity depends on the size of the female and may vary from a few thousand to more than 60,000 eggs per clutch (Ennis, 1981). Molecular studies have revealed that one egg clutch may be fertilized by more than one male, though this is a rare occurrence (Jones et al., 2003; Gosselin et al., 2005). Homarus americanus has higher fecundity for any given carapace length than H. gammarus (Tully et al., 2001), though this may also depend on temperature and geographic location (Agnalt, 2008).

Hatching takes place in late spring (May – June) and larval development takes two to four weeks in the plankton. There are three larval stages and one postlarva, which becomes competent for settling about half way through its life (Katz et al., 1994; Incze et al., 2010). The first three larval stages drift with prevailing currents, though they may make diel vertical migrations. The postlarva is an active swimmer, which in combination with prevailing currents reach inshore waters in time for settling and metamorphosis (Katz et al., 1994). Finding suitable benthic habitats is apparently a critical event in the life cycle of lobsters, and there is a large amount of literature concerned with this (Lavalli & Barshaw, 1986; Wahle & Steneck, 1991; Barshaw et al., 1994; Incze et al., 2006, 2010; Wahle et al., 2009).

Homarus americanus does not appear to have invasive characteristics. In fact attempts to introduce the species intentionally to the Pacific coast of America have been unsuccessful. However, it may introduce parasites and pathogens, which can also infect the native lobster, H. gammarus. Gaffkemia is probably the most serious of these diseases (Stewart & Marks, 1999; the Lobsterscience report), but there are others, such as "shell disease" (Comeau & Benhalima, 2009).

Competition with native species, including native crabs may also be a problem. However, experiments from the native area of H. americanus with the invasive crab Carcinus maenas indicate that although they compete for both food and shelter, they are able to coexist if resources are not limited (Williams et al., 2006, 2009). Offshore lobsters may also be competitors of the native Norway lobster, Nephrops norvegicus (Linnaeus, 1758) (van der Meeren et al., 2006).

The most worrisome problem may be if hybridisation can take place in the wild, and hybrids displace the native populations. Hybrids can be produced artificially in the laboratory, though offspring is usually infertile (Hughes & Beaumont, 2004). However, behaviour seems to be aggressive rather than attempting courtship and mating when the two species are kept together in the laboratory. On the other hand, H. americanus may be able to evict H. gammarus from its shelter, and this could be a problem if shelters are limited (van der Meeren et al., 2008).

Lobster fishery in Canada goes back about 200 years (Fogarty & Gendron, 2004). H. americanus is a valuable target for fishery in Canada as well as northeastern USA, and concerns have been raised previously about overexploitation of the species. However, populations appear to have increased rather than decreased in spite of increased fishery (Steneck, 2006; Incze et al., 2006). Size restrictions, closed seasons and ban on landing of ovigerous females were first introduced in 1890s (Pezzak, 1992). Minimum legal size for fishery in Canada is a carapace length of 67 to 84 mm depending on the year and the area (de Heyer et al., 2009; Tremblay et al., 2009). No-take areas have been established to protect a breeding stock (Rowe, 2001), but whether this has an effect is unknown. Coastal waters are subdivided into a number of lobster fishing areas (LFA) in Canada and lobster management zones (LMZ) in the USA, with separate regulations (Pezzak, 1992; Incze et al., 2006; Bowlby et al., 2008). Artificial reefs may be used to enhance the density of lobsters within a fishing area (Miller et al., 2006). Value of lobster fishery in Canada reached over 400 million Canadian dollars in 1998 (Jones et al., 2003) and that in the USA 374 million US dollars in 2004 (Towle & Smith, 2006).

So far Norway is the only country where H. americanus has been found introduced to the wild repeatedly over several years (Jørstad et al., 2006, 2007; van der Meeren et al., 2006). Live American lobsters are imported to many European countries, but very few cases of capture of escapees have been recorded (Minchin, 2007; Främmande Arter, 2008). Norwegian authorities have imposed a reward for capture of lobsters that are genetically identified as H. americanus in an attempt to eradicate the specimens that have adapted to living in the wild (van der Meeren et al., 2006). A Nordic working group has recommended a total ban on import of live American lobsters to Nordic countries, though it may have to be expanded to comprise the entire EU/EØS region to be efficient (van der Meeren et al., 2004). So far, however, only the legislation prohibiting release of live non-native species is in place, and this is obviously insufficient.